Forget solar roofs. The world’s first solar road is here, in the small village of Tourouvre-au-Perche in Normandy, France. This new use of solar energy takes advantage of large swathes of road infrastructure already in use… to produce electricity without taking up new real estate.

A 1km (0.6-mile) route covered with 2,800 m2 (30.140 ft2) of electricity-generating panels, was inaugurated by the ecology minister, Ségolène Royal.
It cost €5m ($5.2m) to construct and will be used by about 2,000 motorists a day during a two-year test period to establish if it can generate enough energy to power street lighting in the village of 3,400 residents. 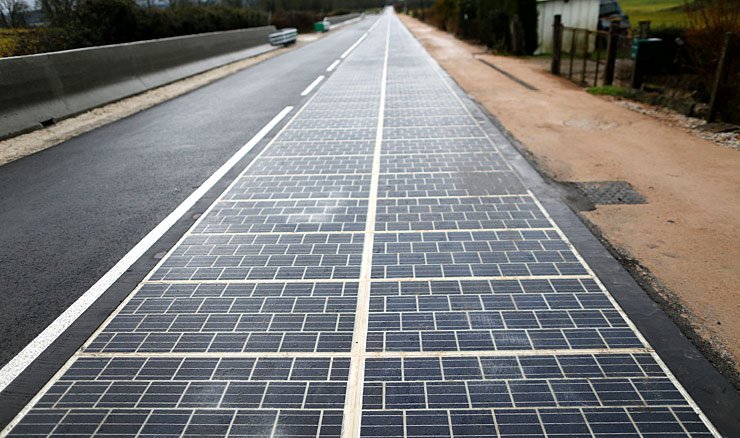 Before the solar-powered road – called Wattway – was opened on the RD5 road, the panels were tested at four car parks across France. The constructor was Colas, part of giant telecoms group Bouygues, and financed by the state.

Normandy is not known for its surfeit of sunshine: Caen, the region’s political capital, enjoys just 44 days of strong sunshine a year compared with 170 in Marseilles.

Royal has said she would like to see solar panels installed on one in every 1,000km of French highway – France has a total of 1m km of roads – but panels laid on flat surfaces have been found to be less efficient than those installed on sloping areas such as roofs.

The cost question is far from being resolved. Each kilowatt-peak — the unit of measure for solar energy — generated by Wattway currently costs 17 euros, compared with 1.30 euros for a major rooftop installation. 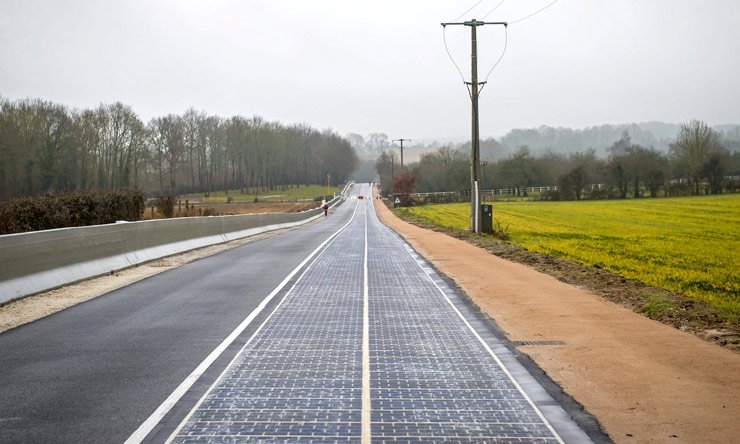 Colas said the panels have been covered with a resin containing fine sheets of silicon, making them tough enough to withstand all traffic, including HGVs. The company says it hopes to reduce the costs of producing the solar panels to make the cost competitive by 2020 and has about 100 other projects for solar-panelled roads – half in France and half abroad. Source: The Guardian