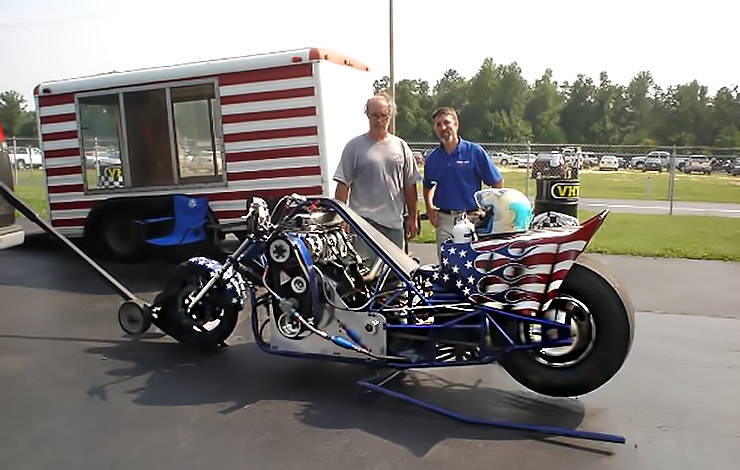 The key word is insane. That is just what this bike is; insanity at its best. Mike Charlton has taken a small block Chevy V8 engine and mounted it sideways onto a chopper frame. That trick alone is crazy. Add to that recipe a supercharger and the level of crazy rises by ten. That might be crazy, but then you have to ride, and that is beyond crazy and approaches insane mad scientist rankings.

That is just what the video below shows. It shows a man…erm … a crazy man trying to control an insane Blown V-8 Drag Chopper as it launches down a quarter mile drag strip. Notice that by the time he shifts gears the first time the chopper is crossing the median into the second lane of the drag strip. He finishes the run at 132 MPH in just 10.82 seconds, but his feet never leave the ground. What Could Possibly Go Wrong?
–
I cannot imagine how much that bike weighs. One slight error in judgment and it is going down. Potentially going down at 132 MPH, there is just no way to realize how badly that is going to turn out for the rider.

Even if you break free of the bike, you are going to skid across the asphalt and likely collide with something like a cement wall. Helmet and suite are only going to protect you from so much damage.  If you slide into the cement wall at 100 mile per hour, then best you can hope for is a broken leg.
– 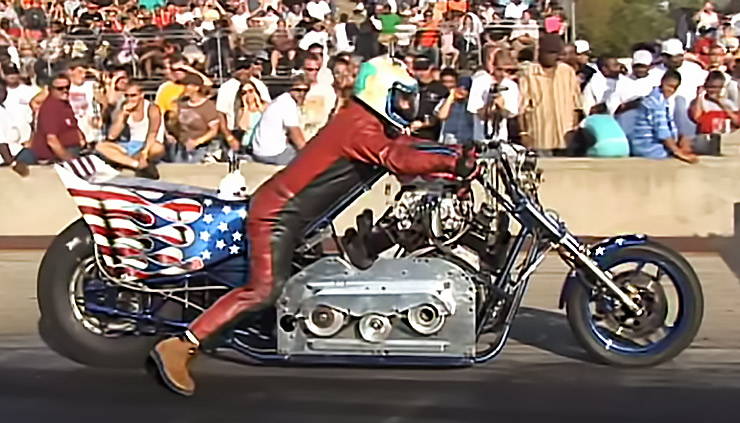 The Grim View of What If

There are 206 bones in the human body. If you hit the cement wall at 60 MPH how many of those 206 bones would you break. A broken bone is just half of the problem. There is also muscle damage from both the broken bone and the impact. The extent of the injuries would be dependent on how your body came into contact with the wall. A diagonal impact could effectively break the bones in one or both legs in multiple spots. Think about crushing an aluminum can.

Oh…that’s going to require surgery and hardware. Some surgeon is going to have to rebuild all of that. Pins, screws, bolts, metal shafts… and then you wake up in a hospital… maybe. Is there enough pain medication to deal with that? No! This is why this was an insane idea from the start.
The fact that we are watching it unfold on video is equally crazy.
–