In 1934 Mr. R.G. Le Tourneau and Harvey Firestone introduced the first pneumatic tire, designed specifically for earthmoving vehicles. Firestone recently developed the 70/70-57 SRG DT tire for the L-2350.
Le Tourneau and Firestone claim it is the largest tire in the world situated on the world’s largest loader. The tire, fitted on a Titan rim, has an overall diameter of 4 m (13 ft), a width of 1.78 m (5.83 ft), and a total mass of nearly 7.3 t (8 tons).

At 6.8 tons each not including the weight of the rim. The Cat 994 D uses smaller size 58/85-57 tires, the Le Tourneau uses the 70/70-57 size tires. Again these vehicles are beautiful statements of engineering skill and prowess, huge strong robust and as reliable if not more than a family saloon. 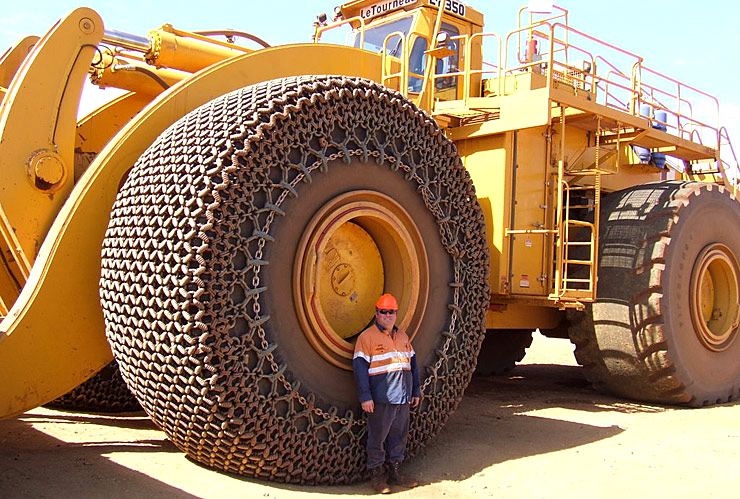 Each wheel on the loader is independently and electronically driven, this gives positive traction and increases the stability with shift free operation. This feature has been utilised for over 40 years by Le Tourneau. The electric drive system that manages the wheels gives a longer life span to the tires and gives more room for the driver to concentrate on operating the shovel as opposed to getting the right gear for each movement.

These wheel loaders earn their keep working in mines around the world, they have to be maintained to a very high degree as a redundant vehicle would lose money for the mining company every hour the wheel loader is not used.

The pictures below depict some good images of these tires, that are fitted with ‘snow’ chains. It was discovered that with the use of these snow chains that more traction was possible on muddy as well as just snowy ground. 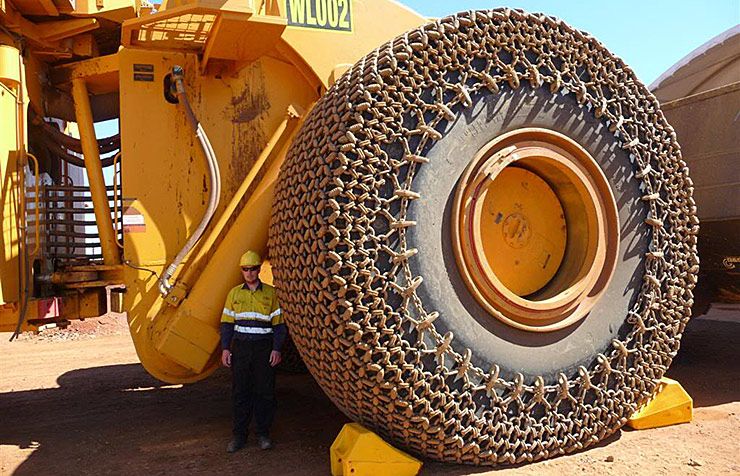 Also these heavy duty chains, weighing up to 5 tons each, protect the tires from damage. Replacing a damaged tire is very costly, both in man hours and direct expense, as the cost of each tire is around $62,500 plus a couple of grand in labor that’s a lot of money to replace a flat tire!

Fitting these chains to the tires is a mammoth task in itself, but it’s worth the hassle because the tires are so expensive and productivity of the loader is seriously thwarted by a puncture or any damage to them.