There’s no such thing as a minor fender-bender when it comes to plane crashes, but one pilot seems to have suffered the closest thing to one in Plainville, Connecticut.

Manfred Frost, a 79-year-old pilot,  was on his way to eat breakfast when suddenly his plane crashed into a tree and tumbled to the ground. Fortunately, Mr Forst, who was flying solo, only suffered minor injuries due to the crash and was taken to a local hospital.
– 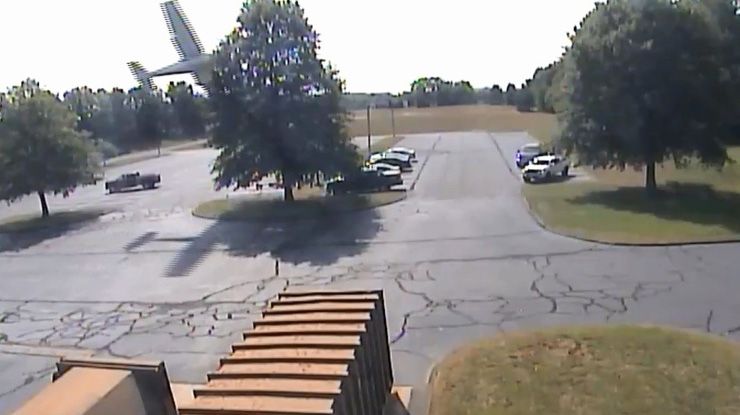 A Carling Technologies security camera captured the crash in perfect detail. The low-flying Cessna attempted to cross the parking lot, banking sharply to avoid the trees near the building. It missed the first tree…but not the second. The plane pirouetted in mid-air, then fell to the ground next to the tree. Dave Thayer, a Bristol resident, was an eyewitness to the crash. He frequently visits Robertson to watch landings and takeoffs, was near the northern end of the airport’s parking lot when he saw a plane landing from the south.

“I was sitting down at the end of the parking lot here, looked up because I heard the plane. Saw it going directly across probably 200 yards from where I was sitting, knew it was going the wrong way obviously,” said David Thayer. He watched the plane crash right in front of his eyes. The FAA said that they are investigating the cause of the crash but officials did say there was a small fuel leak.

Watch the video below as surveillance camera caught a small plane crashing in a parking lot.