Based in the center of Stuttgart’s Meilenwerk, a German international hub for car dealers, the V8 Hotel offers you the night and the ride of your life.
Those who like a high-octane holiday experience can snuggle under the stars at the drive-in, they can stay in the workshop or even at the car wash.

The V8 Hotel is built in a building that used to be a terminal for the Boblingen Airport, opened in 1915.
The decision to rebuild Boblingen as a hotel was not made until recently.
But, after a lot of renovations and rebuilding work, the hotel was opened in 2009. 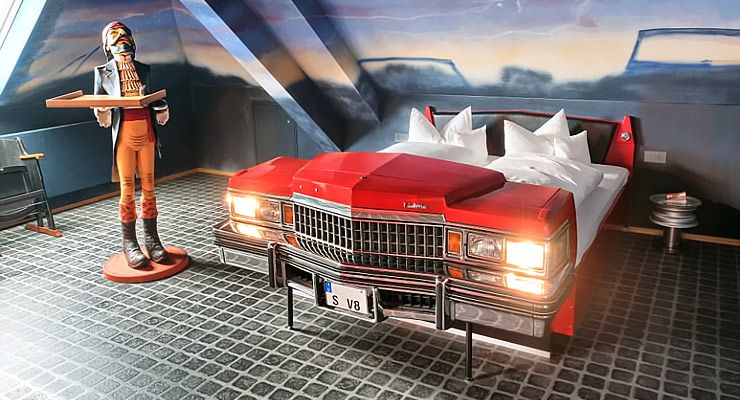 The hotel has 34 rooms. There are 10 themed options, four single rooms, 19 double rooms, and even a tower suite. The car-containing rooms in the hotel include a 70’s Cadillac drive-in cinema, a Mercedes Benz carwash, and a Morris Minor garage. If this is not good enough for you, the V8 hotel also has its own breakfast cafe, American-style steakhouse and an onsite brewpub, because nothing is better than beer and cars. However, the Mercedes Suite is the highlight of the hotel.

The V8 Hotel occupies only half of the terminal building. In the other half there’s an auto museum that offers car enthusiast a rare look at a fascinating collection of classic, vintage and collector cars, as well as everything that is connected to this industry.

Heike Petzold, one of the employees in the V8 hotel, says that everyone wants to come to Meilenwerk. Even those who live in that area go to the hotel to stay in the themed rooms. There are guests from all ages, from children to pensioners, as well as businessmen and families. There were even a few celebrities, but he isn’t allowed to say their names.

The V8 Hotel is a must visit for every car enthusiast.