In the 1970’s when the first American satellite photos were taken of this vessel as it sat inland, it was believed to be a normal Jumbo jet sized aircraft under construction… but why was it sitting on a jetty next to water?
When the vessel was later photographed sitting in water the questions started to fly ” What is it ? ” and ” Why is a huge jumbo jet sized plane sitting in water? “. What the Americans had unknowingly photographed was The Caspian Sea Monster, a 540 ton Ekranoplan.  A plane that could skim across the surface of the sea at tremendous speed as seen in the actual Russian photo below… taken during sea trails.

The 540 ton Ekranoplan or Caspian Sea Monster as it was called, can travel over water in excess of 290 knots! This is a phenomenal speed for what is basically a sea going vessel.


Ekranoplan is a Russian word, it means ‘screen craft’ or ‘skimmer’. It is not a plane nor is it a ship, its more like a mixture of both. The Ekranoplan travels along on a dynamic cushion of air that is generated by its forward movement, and with eight powerful turbofan jet engines it can reach a high rate of knots. 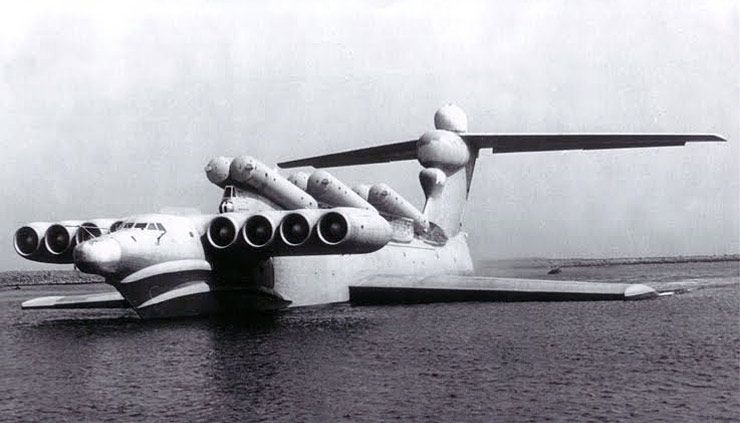 The Ekranoplan has similar characteristics of the common hovercraft, in that it flies just above the surface of the water as it moves. However, it will not hover whilst stationary but  just sit and float  in the water like a boat.  It’s a revolutionary way to travel over the oceans at high speed and the Russians thought of it first.

These Ekranoplans are big and they are fast, they were kept secret from the west until the fall of communism in the early 1990’s, when information about them was slowly revealed.

It can quite easily be envisaged a hundred of such craft zooming across the ocean, relatively undetected, flying underneath  radar to invade a country. 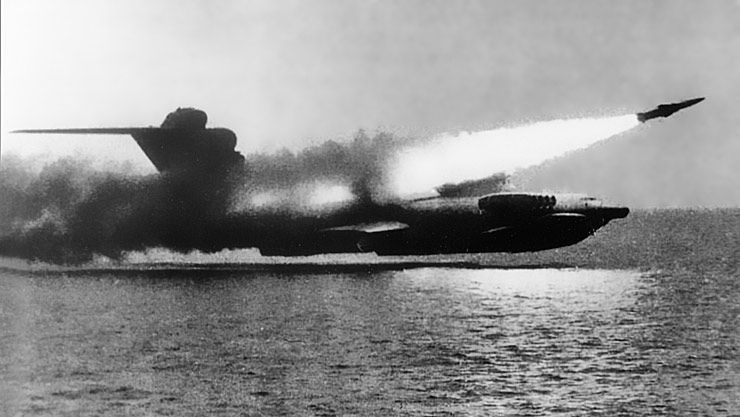 By the time the target country realized what was going on, it would have been too late.  The front of the fuselage would have opened to allow soldiers, tanks, trucks, jeeps, and armored cars to deploy and invade.

You have to imagine several hundred of these craft, all flying at over 290 knots, all under radar in a mass invasion.  We could then fully realise the element of surprise that they would have had. Full of tanks, trucks, men and equipment, it would have presented quite a shock invasion force.

Never underestimate the Russians, they are practical, innovative, resourceful and militaristically astute.  This relatively simple craft that just uses a bit of leverage from the air around its short wings is something that the western powers had not fully researched, if at all.

You have to admit, its one hell of ship, fast, manoeuvrable, and heavily armed but maybe not so well protected.  Unlike a warship that has armor plating, the Ekranoplan would be susceptible to enemy firepower, a couple of rocket hits could seriously damage or render an Ekranoplan inoperable.

You have to imagine a craft the size of a Boeing 747 Jumbo Jet when regarding these Ekranoplan’s, but they are bigger (it was almost twice (!) the length of a Boeing 777-200), have more power and travel  just a few feet over the waters surface. The versatile Ekranoplan can achieve a good clearance above the waves.  It can fly the same height over ground too, as long as its not too hilly. 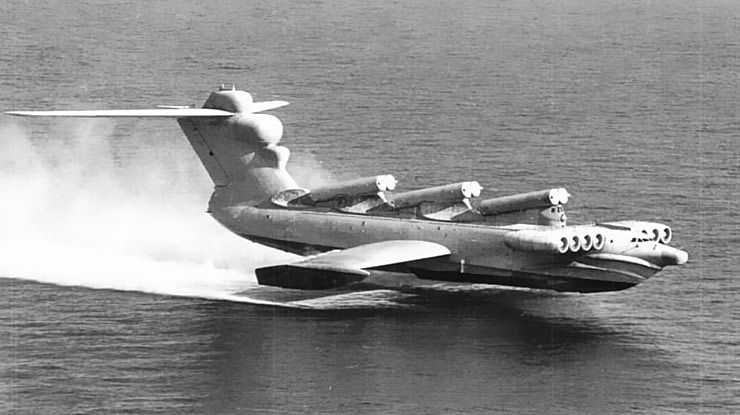 Most countries have now built prototypes of the Ekranoplan design as it has very useful application both in the military and commercial fields. As yet no commercial flights have been instigated but there are reports that a lot of private ventures are being developed, mostly in the U.S.A.

Ekranoplan’s may indeed be the ocean liners of the future as they are very safe and very fast. I for one will be watching out for any new developments with this fantastic idea from Russia.