A truck has pulled over as the huge aircraft is blocking the whole road.

An Mi-8 gunship made a spectacular landing on a highway in northwestern Kazakhstan, blocking a truck convoy. What follows is a minute of apprehensive silence, as the truck drivers are wary of coming close to the rotor blades, which have a 21-meter span.
–
Suddenly a pilot then emerges from the massive helicopter into the blizzard while its rotors still turning, and trots urgently towards the first truck. The helicopter officer shakes the hand of the driver, and then starts pointing his arms animatedly in different directions, while evidently making inquiries. 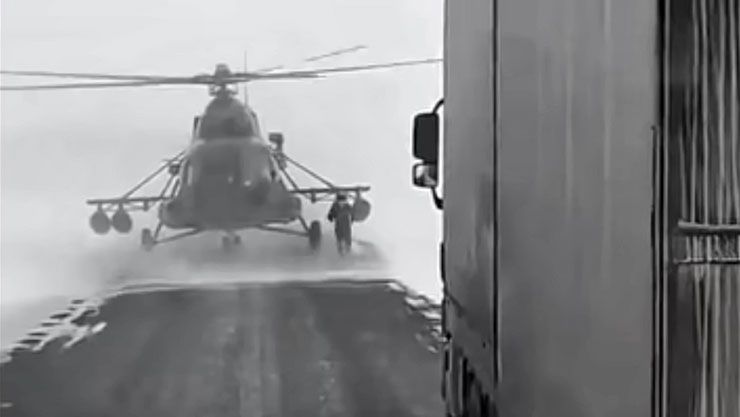 To the astonishment of the drivers, the pilot started asking for directions to the closest city.
“These guys have lost their way, they may be a while in the air”, the driver of the first lorry radios across to the driver of the second.
“They could not understand which way to go.
“He came to ask which way is Aktubinsk.”

After receiving instructions from the driver, officer shakes his fist triumphantly, and jogs back to his place inside the $10 million missile-laden craft. The helicopter then makes a deafening roar as it takes off again and flies away.

The Kazakhstan Ministry of Defense released a statement saying that this was a “planned visual orienteering exercise,” in which trainee pilots were told to determine their location “including by means of human survey.” According to the statement, cited by the local media, the exercise was a “success.”

To be fair, it’s the well known fact that snow storms represent some of the most dangerous conditions for the helicopters, as good visibility is vital for safe flying – more so than in case of airplanes.