This “Mad Max: Fury Road” raw footage video compilation shows how exciting a desert demolition derby looks like even without help from post-production special effects and CGI enhancements and proves that production truly was insane.

Mad Max is essentially one awesome movie thanks to the unbelievable stunts and planning by the filmmakers, but it’s even more spectacular when you realize how it was done. 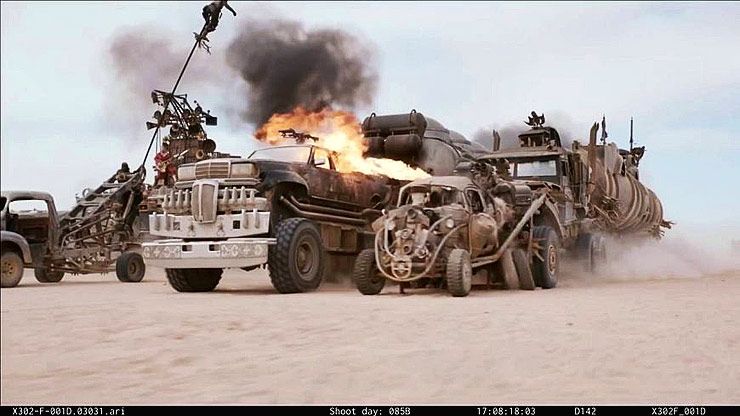 “Mad Max: Fury Road” was a stunning visual masterpiece, the Cinderella story of last year’s Oscar season which won most of the technical categories at the Oscars last year (including production design, costume design, and sound editing), but it lost Best Visual Effects to “Ex Machina” – not much of a surprise, considering director George Miller focused so heavily on practical effects. There were still some visual effects added, of course, but even without them, “Mad Max: Fury Road” is still jaw-dropping stuff.


You can see that at work in this video compiling pre-production tests, behind-the-scenes video, and raw footage from the 2015 movie that was filmed in Namibia that hasn’t been edited. The footage reveals that the stunts in the film are almost just as mind-blowing without any CGI added in yet. It’s amazing to think that everything you see in the videos below – the death-defying stunts, the high-speed crashs, the fiery pyrotechnics – are actually happening.

None of the shots shown in the 4-minute video were enhanced with CGI in any way, which makes it even scarier to see the kind of danger the actors put themselves in to get the perfect shot.

Want proof? Check out the video below!

In the post-apocalyptic wasteland, it’s survival of the