Yep, you read that right: 1,400hp twin-turbo force-feeding 21 pounds of boost into a 410 cubic inch methanol motor.  Hoonicorn V2 produces 1,400 horsepower at the crank that is then sent to all four wheels in an effort to vaporize Block’s Toyo tires instantly. 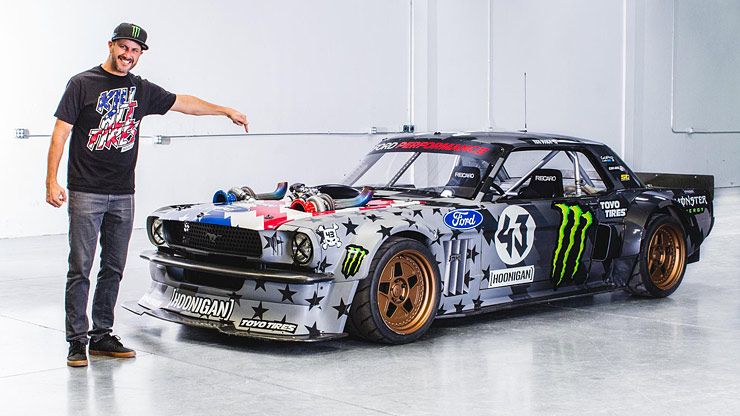 When Ken Block introduced his all-wheel drive 1965 Ford Mustang known as the Hoonicorn, it seemed to be the ultimate tire-slaying muscle car, but Block and his team have added a pair of turbochargers to the NASCAR V8 – lifting the output to 1,400hp and increase the tire shredding abilities of this gorgeous custom Mustang.

Over the past few years, Ken Block has featured a variety of high performance Ford vehicles in his Gymkhana videos and on his various rally racing teams, but the original Hoonigan hadn’t piloted a Ford Mustang – until Gymkhana 7 arrived.

Block’s 1965 Ford Mustang – known as the Hoonicorn – was fitted with a high performance all-wheel drive system and an engine from NASCAR’s Roush Racing team. That 410 cubic inch NASCAR V8 delivered 845 horsepower to all four wheels, allowing Block to make the first Gymkhana video with a Mustang a very memorable one, with tons of tire smoking, high speed action. 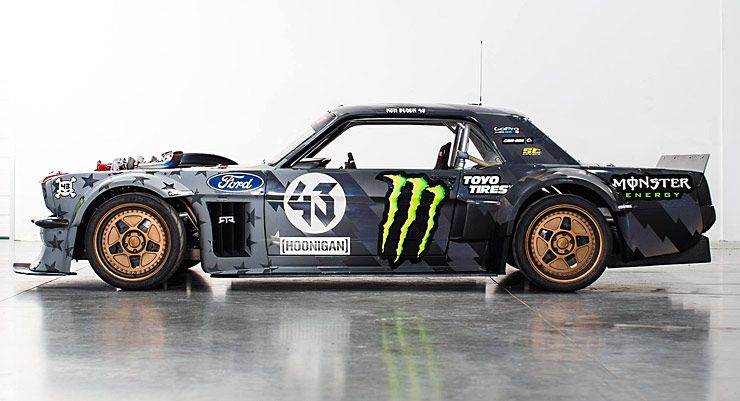 While the Hoonicorn Mustang really doesn’t do anything that Ken Block cant do in any of his Fiesta or Focus rally cars, there is no question that using an all-wheel drive Ford Mustang with a NASCAR engine packs that extra special something. In short, the Hoonicorn Mustang is just plain cooler than say, an all-wheel drive Fiesta, but after Gymkhana 7, how does Block grab our attention?

By adding a pair of huge turbochargers which vent through the hood of the Hoonicorn Mustang – lifting the output to 1,400 horsepower and giving it even great potential to slay all tires. 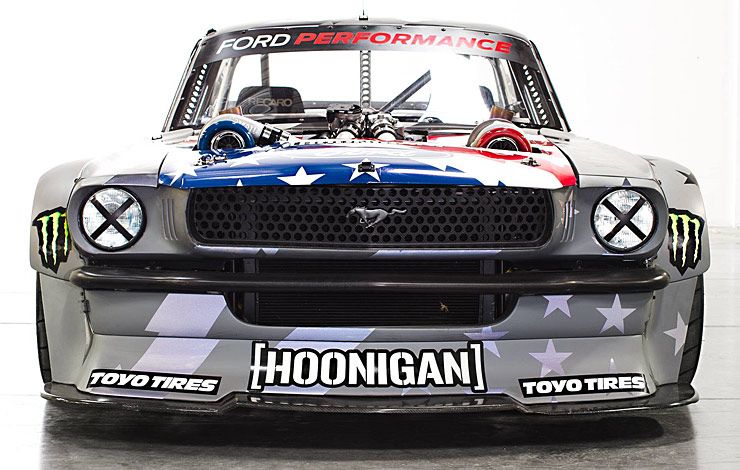 Ford Mustang Hoonicorn V2
While the 1965 Ford Mustang that is known and loved as the Hoonicorn is still the same glorious, all-wheel drive, NASCAR-powered monster, Ken Block and his team added a pair of huge turbochargers which vent through the hood- allowing this beast to literally breathe fire. In fact, Block shows the Hoonicorn V2 Mustang blowing flames as he roasts a marshmallow standing next to the engine bay in the short video below.

Unfortunately, there is no running footage of the Hoonicorn Mustang, but this car is said to be a part of a new video which might be Gymkhana 10 – or it might just be an awesome video showing Block go crazy in his 1,400 horsepower, all-wheel drive muscle car.

Finally, to go with the new turbo setup, the Hoonicorn V2 Mustang gets a new patriotic paint scheme with a heavy dose of Monster Energy Drink logos, Hoonigan logos and Block’s familiar number 43.

Check out the short video of the Hoonicorn Mustang with the new engine setup.

By now we’ve all seen Ken Block tearing up