The fans of the movie “Back to the Future” know that 21 October 2015 was the date that Marty McFly traveled to with Dr Brown. Therefore, the innovators improved their efforts to create real working hoverboards, such as the crowdfunding-born Hendo Hoverboard and the Lexus Hoverboard.
The Hendo works using magnetics and can only be used in a special purpose-built conductive rink, while the Lexus uses superconductors and magnets that work against gravity to lift the board, as liquid nitrogen cools the superconductors, giving off steam off the sides of the board. 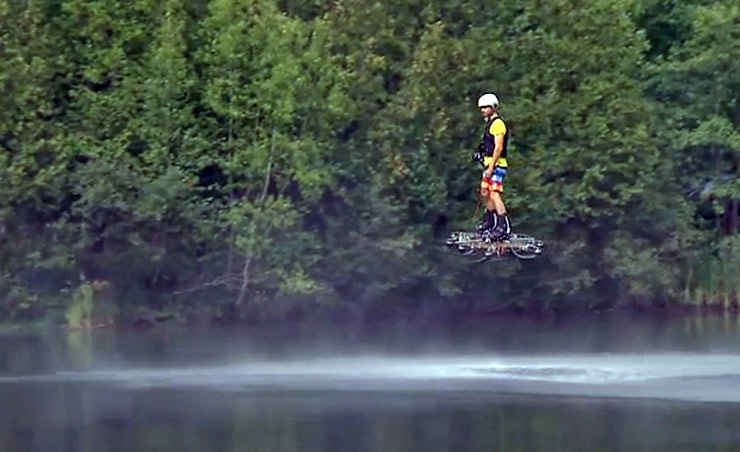 Neither of these designs goes very far off the ground, and therefore the most exciting invention of all is the Omni Hoverboard, which broke the Guinness World Record for longest distance travelled by a hoverboard. In May 2015 it flew a distance of 905ft at a height of 16ft in the air, in just 1.5 minutes, and the inventor is Catalin Alexandru Duru, 31, from Canada who revealed the he worked on this project for about five years.

The Omni Hoverboard has eight propellers and a frame made from carbon fibre. The motors controlling the propellers are powered by 12 lithium polymer batteries, that generate about 40 horsepower, but the combined flying time is just 1.5 minutes. The acceleration is achieved by squeezing a joystick made from a pair of pliers and allows the hoverboard to go higher or lower, slower or faster. The user is securely anchored to the hoverboard with snowboard binding straps and steers the board by physically turning in the air to change its direction.

We can expect the Omni Hoverboard to be released in 2017. Until then, they are still improving the prototypes of the invention and are trying to solve the problems with the circuits and propellers. However, the fans of the “Back to the Future” franchise, can’t wait for the Omni to come out since they have been dreaming about that for 26 years.