Danny Bacher is not only a car guy, he likes anything with wheels. He is also a car builder, at least mentally. 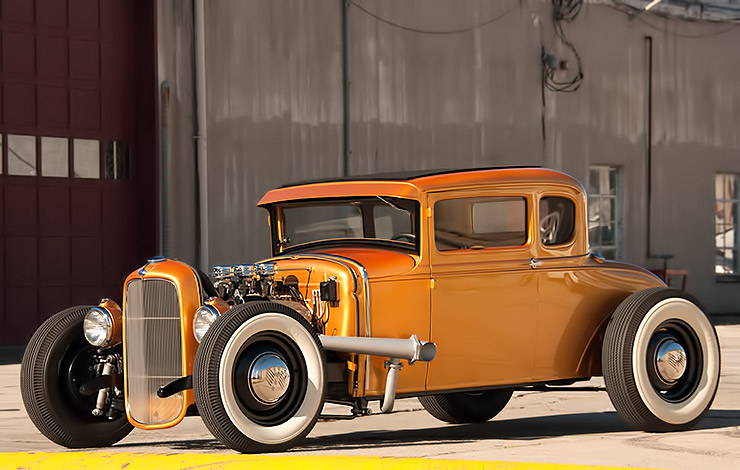 In his mind, he’s modified this or customized that, like we all do. He’s never actually built one of his own designs from scratch, though. But he’s also smart enough to only let the pros actually touch the metal. So when he attended a Goodguys show and came away with an inspiration for a 1931 Ford Model A hot rod, one built like the rodders of the ‘50s would do it, but with some modern-day perfection, a daily driver with one-off style, he decided to first find the right builder. That led him to Atlanta’s Mills & Co., none other than Josh Mills himself and able aide- decamp, Gary Overacre.

Danny walked into Mills & Co. one day with nothing more than this general idea of a car and was amazed. Most folks unfamiliar with the custom car business are likewise overwhelmed when they first realize just what a truly talented builder can do. The general public confuses customizers’ shops with body shops, only “talented” at matching 7-year old paint on the polyurethane bumper fascia of a 2009 minivan. Craftsmen like Mills & Co. are like Michelangelo’s in comparison, and that’s no insult to body shops, just illustrating the difference in purpose.
– 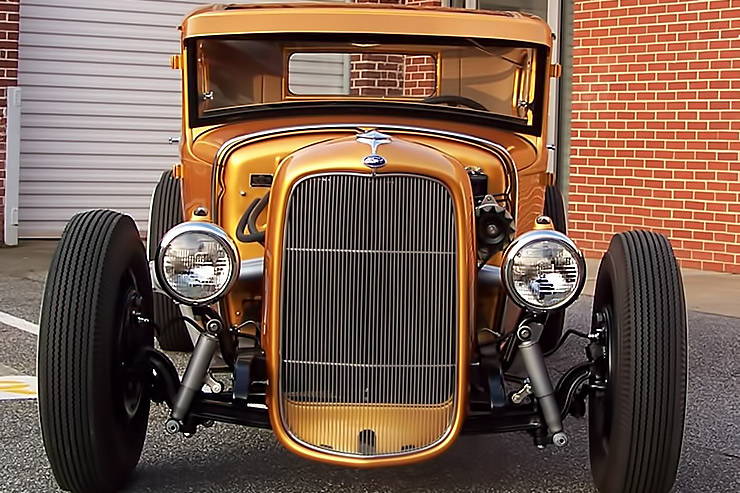 Danny found Josh “very intriguing” and the fatal blow was when he studied Josh’s personal ride, a ‘35 Ford. It was “one of the best looking cars I’d ever seen, full of neat touches.” Danny fell in love with whole process and had to do it. He loved the idea of creating a one-off masterpiece from scratch in this style.

The charge was: nothing too radical, reliable, built to drive, period styled hot rod as if built in the 1950s in the traditional style. Mills & Co. found this original ‘31 in Virginia, body only, shipped it to Atlanta, had it sandblasted, and the fun work began. 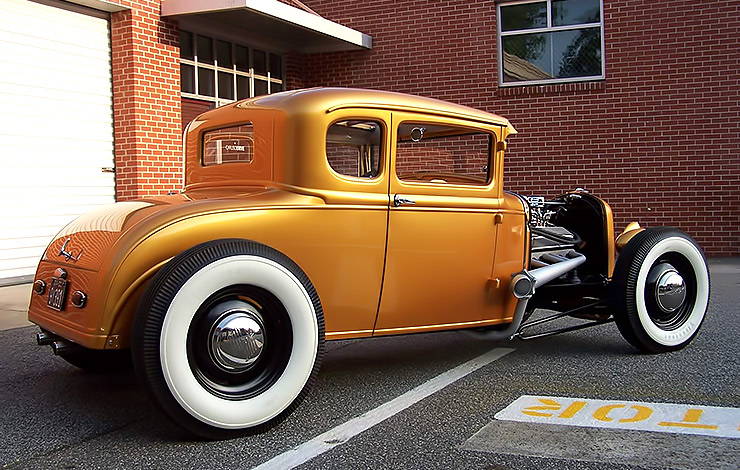 Danny didn’t want the standard dashboard and he didn’t want the same kind of dash modification that everyone else had. So Mills fabricated a complete dash, hammered out of metal, from scratch, to fit a gauge plate they sourced from a vintage boat, one of the beautiful teak runabouts you see from the ‘30s. Genuine old Stewart-Warner gauges went in. The result looks correct and finished, like a factory job, yet there’s nothing else like it anywhere. Danny wanted the tachometer, and on the steering column where God intended, but not some bolt-on kit type tach. Mills found a genuine vintage Stewart-Warner tach and custom-made a stainless mount for the steering column. 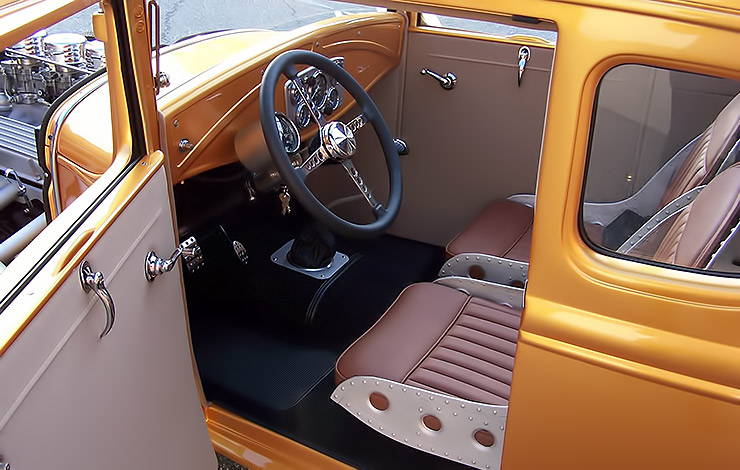 They took three inches out of the roof and three and one half out of the floor. They also dropped the axles in front. The car is low, but not too low. It could have been lower but it’s a city car. Danny parks at his office downtown. He has government speed bumps and potholes to contend with.


Because of the car’s city life, they also reluctantly had to swap out the mechanical cooling fan with an electric one. Hey, it’s a hot-natured small-block Chevy 350 with a custom made radiator and chopped grille in Georgia! They used a generator, not alternator. There are drum brakes on all corners, and bias-ply tires, because that’s the way it should be. 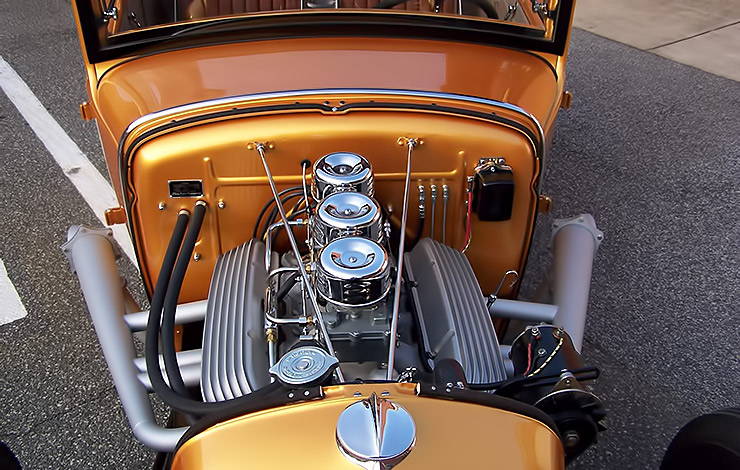 Everything is painted, stainless, or powder coated, even the frame, suspension, interior pieces, the rims, and the grille shell. In fact, the gas tank between the trunk and passenger compartment, was going to be left raw (no one can see it) but that just looked funny compared to the rest of the car, so they finished it, too.

The wood in the roof that Henry originally used was beyond repair, so they used the same kind of wood and in the same style, cut and assembled the same way and stained as the original. In fact, the whole top is identical to the original, the same roof line and construction. The insert is removable, made from convertible Haartz cloth, snapped all the way around. 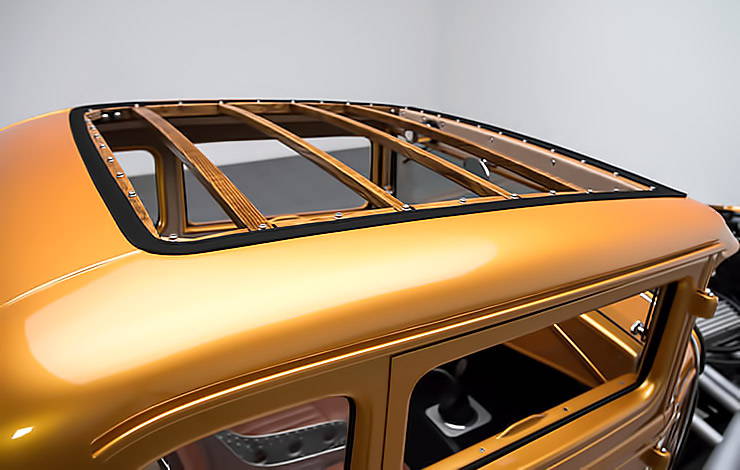 
Danny knew from the start that he wanted bomber seats so Mills found a guy that custom fabricates them – Mike Mercurio in Roswell, Georgia. Then Burt gave the seats about two inches of cushion. He copied vintage patterns to make the pleats. 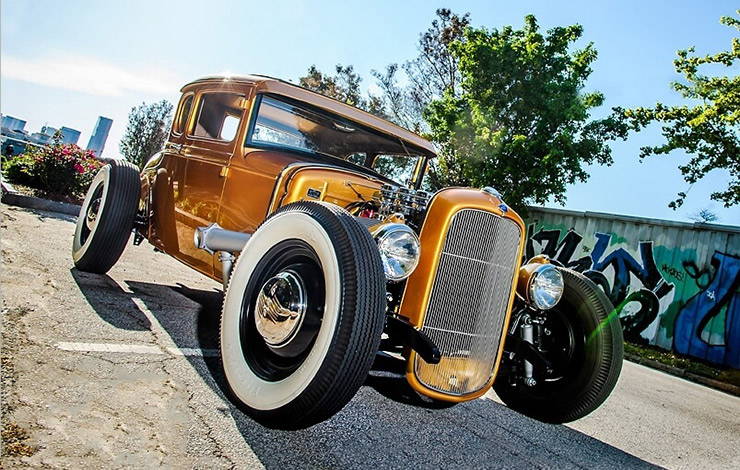 They were going to do a flat paint, but it didn’t look right, even after trying seven or eight shades. Mills tapped their network of paint magicians. Eventually they settled on this color, Goldmine Pearl from House of Kolor; it had some fluff to it, some metallic. It didn’t look right in the can, it didn’t look right on the car, so they gloss cleared it (done by Josh Deavers at Customs and Colors). This sumptuous symphony of color resulted, changing constantly in the light. Photos cannot really show how impressive it is, despite our using a great photographer. 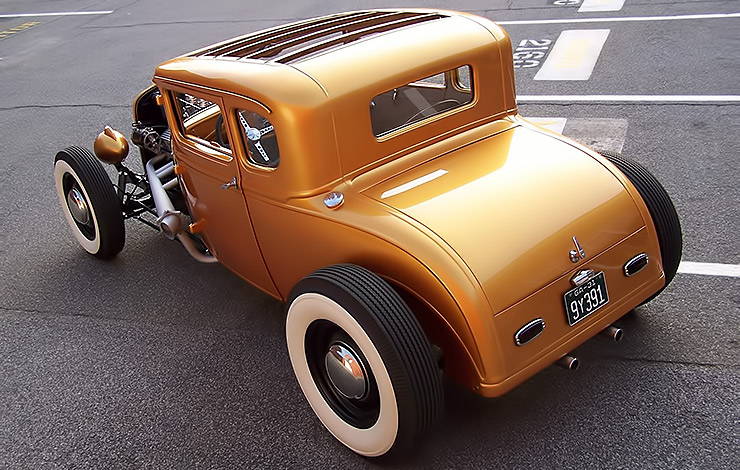 None other than Bill Abrams did the pinstriping. He had retired, but did it as a favor to Josh. It has neat touches everywhere: the dash, trunk, hub caps.

Danny says he can do 80 MPH on highway. It drives like a go-kart, weighing nothing, with minimal suspension travel and that big beefy 350 motor up front. Danny says the only drawback is the time it takes to talk to everyone that wants to stop and talk about it, every place he goes.
– 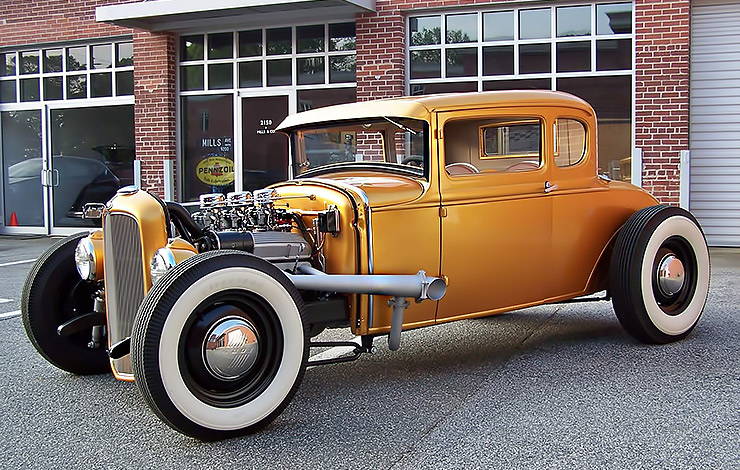 The hot rods are a symbol of the