The hot rods are a symbol of the American automotive culture much longer than the muscle cars. What do all traditional hot rods have in common? They are American cars of the ‘30s, ‘40s and ‘50s with modified engines, also American (especially the V8 Flathead Ford), painted in vibrant colors, pin-stripes, wider wheels and lowered body, providing a more aerodynamic profile, lower center of gravity and they are faster.

However, the story about the hot rods was inevitably changing. It is not unusual to see small cars with big engines (or big cars with huge engines) that are called hot rods. Also, the hot rods do not have to be completely American – after all, what keeps you from using something that has not been manufactured in the USA?


Normally, this might irritate some of the traditionalists, but this does not mean that a little creativity is not good for the hot rods. Remember that Corolla with a V8 supercharged 400 hp or the creations of Caresto, with Swedish and mechanical design, turbine engines that are classically inspired? These are hot rods.
In order to understand this car, you need to appreciate some heresies. What’s worse, to make the engine a Honda S2000, a classic Japanese roadster that conquered the world with its four-cylinder spinner and its impeccable dynamics or to put this engine in a Ford Model A, which would be much better served with a V8 Coyote 5.0 Mustang? 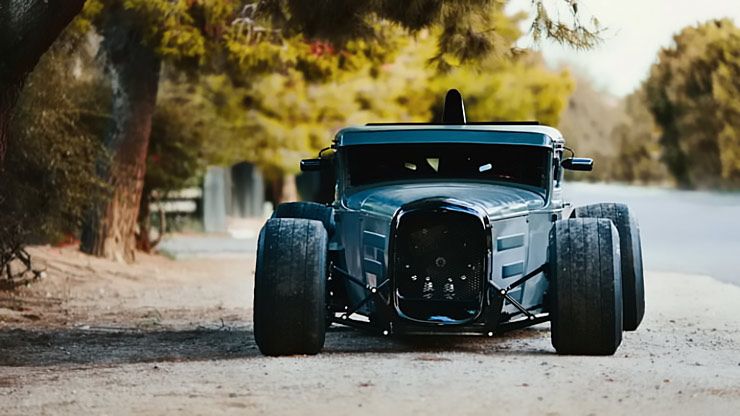 The car was built by a young American named James Schwartz, but it was not him who created it. Schwartz scoured the Internet when he came across a rendering done by the conceptual designer and automotive enthusiast Aaron Beck. Just take a look.
When it comes to automotive experiments today, everything is possible and tolerated. The worst that can happen is to be laughed at for a sloppy assembly in Photoshop. Anyway, would a Ford Model A as custom hot rod with Formula 1 elements be a bad thing?
James saw it, liked it and thought, “I will build this car”, it is that simple. Fortunately, he already had some experience with project cars (he also has a Scion FR-S with Rocket Bunny kit) and decided to do it.
The rendering made by Aaron Beck did not specify the type of mechanical equipment that was used, so James decided to be creative: engine fan four powerful cylinders and spinners, he decided to use the mechanics of a Honda S2000.
The donor car was bought in February 2015 with nearly 220,000 kilometers rotated and no apparent problem and it cost $ 8000. Luckily, the S2000 was quite common in the US, so we’re not talking about an absurdly rare or collectible car in the States. Well, at least not yet.
James could have put a V8 in the LS Chevrolet Honda (or even a V10 Dodge Viper) but, after extracting the mechanics of the roadster, he decided to sell the pieces that were left over. 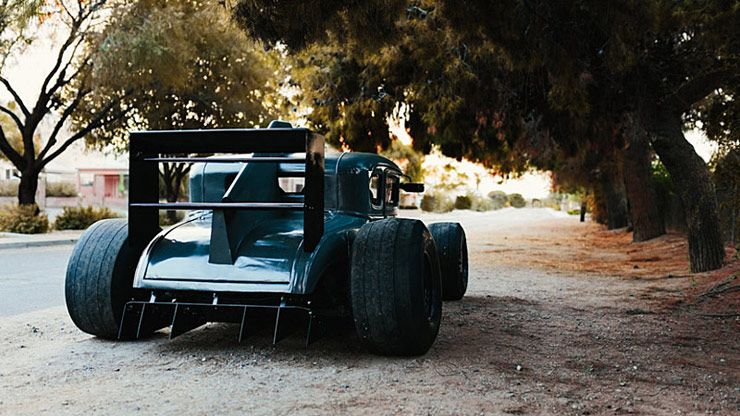 The four-cylinder develops 240 hp F20C at 7800 rpm and it is has a six-speed manual. In addition to the variable valve timing V-TEC, as you may already know, modifying the degree of command can make it more aggressive than a certain number of revolutions per minute. In practice, the engine has optimized its operation, it screams louder and it is more powerful. To have it in a hot rod is not a bad idea, not at all.
The mechanical assembly, unchanged, was transplanted to the adapted chassis of the Model A. The car received suspension dampers inboard and arms overlapping at the front and a rigid axle multilink at the rear, certainly modernizing its dynamics. The interior is an interesting mixture of classic American car elements and European sport bolide competition and, of course, S2000, with beautiful digital cluster in the middle of the panel.
When James saw that everything was working fine, he started the visual customization process. He lowered the body, made a scoop on the roof (which supplies air to the radiator), added a huge spoiler (for us is between single-seater Formula 1 and the Suzuki Escudo Pikes Peak) and painted it black. If you pay close attention, you can notice the sidepods of the body, carrying more air intakes.
However, you cannot say that the final project is not, at least, intriguing because the car has its own personality that seems impossible to be reproduced. It will certainly draw your attention.