To celebrate the unveiling of the 50th anniversary Chevrolet Camaro, General Motors have commissioned and unveiled a pool table equivalent.

A Florida company is hand crafting a 2017 Camaro SS 50th Anniversary edition pool table made with actual Camaro car parts. Made in cooperation with GM to celebrate the 50th Anniversary of the legendary Camaro, every inch of this table is beautifully finished in an actual body shop and painted in any color you like. Your new pool table is then clear coated, wet-sanded, and polished by hand to perfection.


This is the ONLY Camaro pool table officially licensed by Chevrolet and GM and comes complete with its own “VIN” number (Serial Number) and “Title” (Certificate of Authenticity).
– 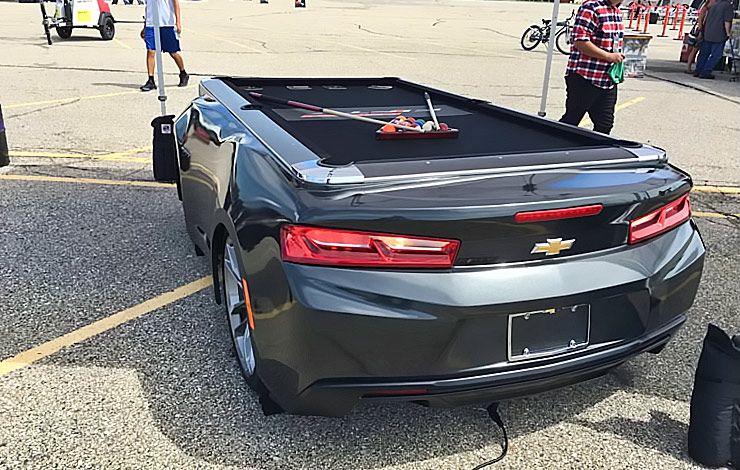 The Chevrolet Camaro is one of the best loved name plates. Now true fanatics can have their very own 2017 Camaro SS 50th Anniversary Edition pool table. The Camaro SS 50th edition joins other automotive legends that are already immortalized as game tables.

The Chevrolet Camaro is currently in its 6th generation. It has been one of the most popular performance cars in history. It debuted in late 1966 as a 1967 model to compete with Ford’s popular Mustang pony car. Over the years it has received numerous accolades. Now the 2017 Camaro is being given a lasting, if not kitschy honor.

The 2017 Camaro joins other automotive legends that have been fashioned into rec room memorabilia. The company already makes a 1969 Chevy Camaro pool table, a 1965 Ford Mustang pool table, a Shelby GT-350 pool table and a 1959 Chevy Corvette pool table.

According to the manufacturer, the pool table is officially licensed by Chevrolet and GM and comes complete with its own VIN or serial number. It features working lights and sports real rims and tires, trim, emblems and grills. 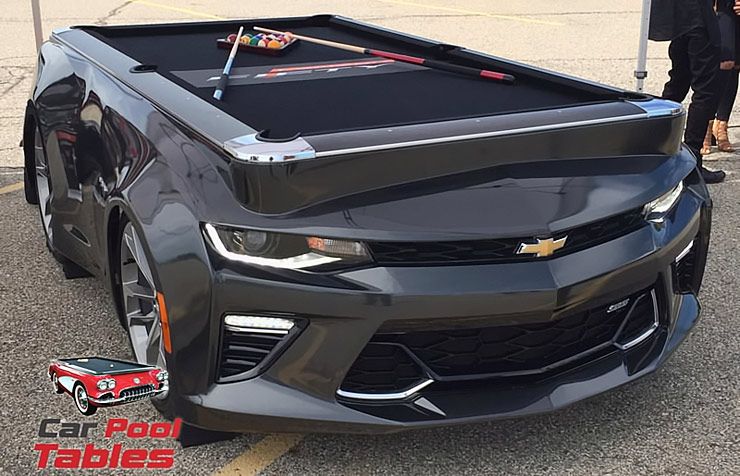 The company called Car Pool Tables claims the table is “beautifully finished in an actual body shop and painted in any color you like (though we recommend the original 2017 colors).
Your new pool table is then clear coated, wet-sanded, and polished by hand to perfection.”

I have not seen this particular model pool table. I did see the 1965 Ford Mustang pool table on display at an auto show and it continually drew quite a crowd. This is certainly an outlandish gift for the person who has everything or a great way to stir someone’s creative imagination for transforming a regular pool table. Either way, it is quite a way to celebrate the 50th anniversary. Hard to believe it is more expensive than most generations of the popular Camaro!

Check out this time-lapse video of how Car Pool Tables  made the 2017 50th Anniversary Edition Camaro SS Pool Table.