When PPRE dropped a six-rotor engine into a Mazda RX-4 we thought that was about as full rotard as you could get. Six rotary engines all lined up in a row was a Wankel wet dream and the idea that anyone could go beyond this rotardedness was unthinkable.


But, if you’re Tyson Garvin, the number is somewhere north of 12. Yes… you read that right… twelve rotors in one engine. Simply put this is no small engineering feat, because this 1400+ hp monstrosity is a true feat of persistence and engineering. Whichever side of the fence you happen to fall on makes no difference in the face of this 12 rotor monster Ultimate Wankel.
–
A record-holding boat racer, Gavin started work on this engine design almost five years ago to develop an alternative to traditional marine performance. 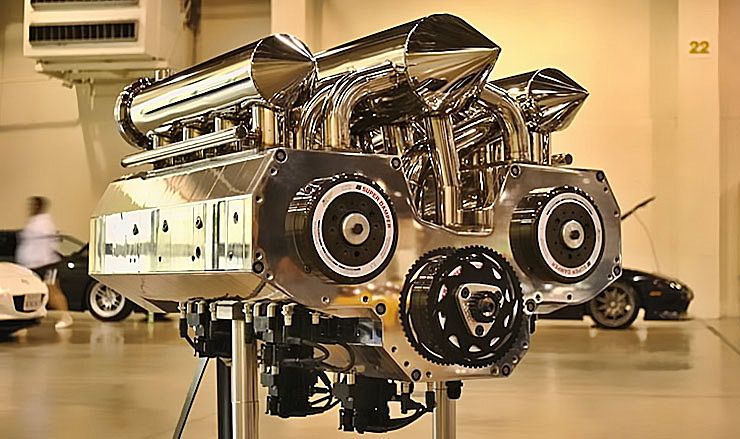 “We came to the limit what a big-block could,” says Gavin. “We wanted to make more continuous power, not just power for drag racing. The rotary makes more power for its size.”

Gavin measured up a fully dressed marinized big-block Chevy and concluded that 12 rotors would neatly fill that space. Overall, the 12-rotor engine is 30 inches long, 31 inches wide and 24 inches tall. Polished from top to bottom, the R12 Rotary engine weighs in at just 830 lbs and displaces a massive 960 cubic inches.

“We looked at a 100 different ways to arrange the rotors,” he remembers. “But [Y design] was the only way get 12 rotors in the space of a big-block.”

Garvin’s estimates that in 1,400 horsepower trim the engine can run for over 400 hours of pleasure boating, indicating that he’s nowhere near close to tapping into the engine’s true potential. The scary thing is, Garvin may be just scratching the surface when it comes to the power his frightening creation can deliver. 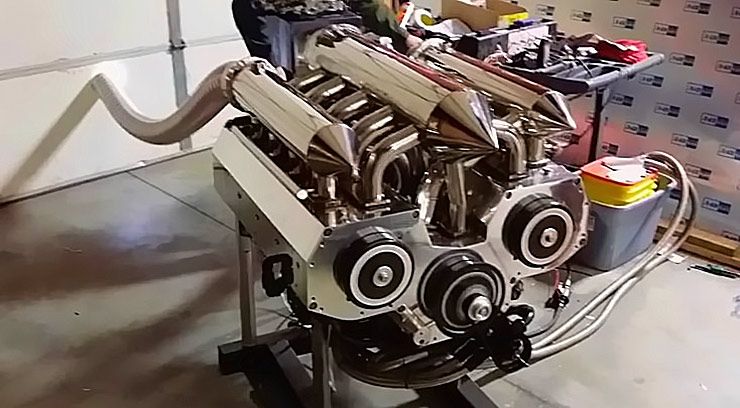 Although ‘gentle testing’ of the engine has only just begun, the best run posted 815lb-ft of torque at just 3,200 rpm with a full bespoke EFI system needed for further runs as getting enough fuel and air into the 12R has been a challenge. The predicted final outcome would be 1,440hp on 87 octane right up to a drag racing version, turbocharged with 50lbs boost and running 116 octane, pushing 5400hp. You can check out the full spec list on the 12Rotor website. Let’s hope he keeps this thing in the water, shall we?

Check out the engine running and a low RPM dyno pull below from the Wankel madman.