The Goat. The Great One. The Tiger. The Humbler. Many nicknames for legendary Pontiac GTO, american car manufactured by Pontiac Division of General Motors from 1964 to 1974, and by GM subsidiary Holden in Australia from 2004 to 2006.
It was a muscle car classic of the 1960s and 1970s era. The Pontiac GTO is considered to have initiated the trend with all four domestic car producers offering a variety of competing models.
The GTO model was revived from 2004 to 2006 model years as a captive import for Pontiac, a left-hand drive version of the Holden Monaro being a coupé variant of the Holden Commodore.


The Pontiac GTO was initially created by the Pontiac engineer Russell Gee, an engine specialist; Bill Collins, a chassis engineer and Pontiac chief engineer John DeLorean. It is worth mentioning that in early 1963, the management of General Motors issued a directive forbidding divisions to participate in auto racing.
At the time, Pontiac’s advertising and marketing strategy was heavily based on performance, thereby making the racing an important component of that strategy. Having in mind the GM’s ban on factory-sponsored racing, the younger and visionary management of Pontiac changed their focus more on street performance.

From 1964 until 1973 it was closely related to the mid-sized Pontiac Tempest/LeMans. The 1974 GTO was a one-year only optional package available on the compact-sized two-door Pontiac Ventura.
The name, which was an idea of DeLorean, was in fact influenced by the Ferrari 250 GTO, the successful race car. Actually, it is an Italian abbreviation for Gran Turismo Omologato, (“Grand Tourer Homologated” – with other words “street-legal race car”) meaning it is officially certified for racing in the Grand tourer class. The fans articulated strong objection to the name, considering it as sheer blasphemy and Ferrari had another name for Pontiac’s new car: identity theft…

In March 1964 Car and Driver Magazine pits the Pontiac GTO against the Ferrari GTO. Surprisingly, the Pontiac comes out ahead. The article hits newsstands and GTO sales explode. Number of GTO’s expected to sell in 1964 was 5000 but number actually sold was 32450. Number had grown to nearly 97000 in 1966.
37 years later Pontiac admits they cheated on the magazine’s test…they secretly installed a bigger engine before the road tests. 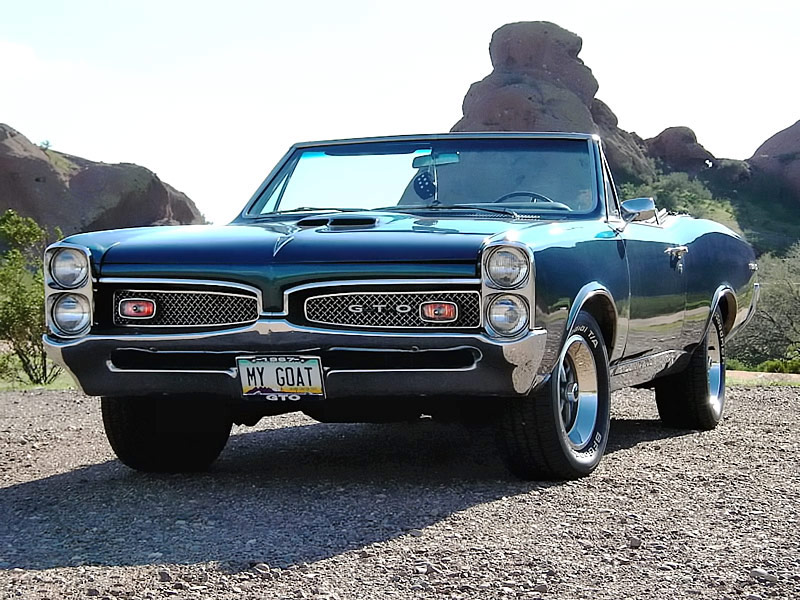 In contrast, the receipt of the Pontiac Grand Prix and Chevrolet Monte Carlo, which were also worked out from the intermediate A-body, was much better because of their squared-off styling and formal rooflines with vertical windows. Oldsmobile, Pontiac’s sister division, received better reviews from the automobile magazines and the car-buying public with the similar-bodied Cutlass. Once more, the 1973 GTO option was offered on two models including the base LeMans coupe or the LeMans Sport Coupe. The peculiarity of the base LeMans coupe was a cloth-and-vinyl or all-vinyl bench seat while the more fancy lavish LeMans Sport Coupe had all-vinyl interiors with Strato bucket seats or a notchback bench seat with folding armrest.
For purpose to prevent internal competition with the “Euro-styled” Pontiac Grand Am, and searching for an entry into the compact muscle market occupied by the Plymouth Duster 360, Ford Maverick Grabber and AMC Hornet X, Pontiac moved the 1974 GTO option to the compact Pontiac Ventura, which shared its basic body shell and sheet metal with the Chevrolet Nova. Critics dubbed it “a Chevy Nova in drag.”

The GTO option was available in both the base Ventura and Ventura Custom lines as either a two-door sedan or hatchback coupe. The base Ventura interior consisted of bench seats and rubber floor mats, while the Ventura Custom had upgraded bench seats or optional Strato bucket seats along with carpeting, cushioned steering wheel, and custom pedal trim.
Cars Magazine tested a 1974 GTO with the optional four-speed and obtained a 0-60 mph time of 7.7 seconds and a quarter mile reading of 15.72 seconds @ 88 mph (142 km/h).
All in all, Pontiac was made the first step into a new car era. Following Pontiac’s lead other car manufacturers release their own GTO-like cars. The name for this powerful new breed of vehicle ? MUSCLE CAR !!!

Snow-balling is a term you hear when someone