Snow-balling is a term you hear when someone takes on a task or a project with a certain goal in mind, but then one thing leads to another, and before you know it your simple project has “snow-balled” into something much greater, and usually much more expensive than you had originally intended. Such is the case with Jon Mannila’s 68 GTO which went from a quick flip purchase to his most prized classic car.


Jon is the founder and owner of MetalWorks Classic Auto Restoration and Speed Shop in Eugene, Oregon, and from time to time if a deal presents itself, Jon will grab a car for a quick flip. When the 68 you see before you turned up, Jon had exactly that in mind…but the project quickly began to snowball into a full-blown, pro-touring build.
The GTO needed very little metal work after being stripped to bare metal, which revealed a very nice body made up of all original GM sheet metal. After only a trunk replacement panel was stitched into place the body was sent for body and paint work. When Jon laid eyes on the gorgeous “MetalWorks Red” paint his mind began to spin about what COULD be done with the GTO.

The next day an Art Morrison GT sport chassis was ordered along with a new GM Performance LS1 engine back by a 4L70E automatic transmission. Once the freshly painted body was sat on the gorgeous satin black Morrison chassis Jon made the decision to let his crew really go to town on the project…the car simply deserved it.

The day the LS1 was sat between the frame rails Jon was on the phone with Wegner Motorsports ordering up a custom built 600hp LS3 to replace it. Now that kind of horsepower is much more fun with as stick shift, so an order was put in for a TREMEC T56 six-speed manual, along with a Currie rear end since Jon was already on the phone anyway…see how this snowballing thing works???
The process continued with a host of other top end components including: MSD Atomic LS fuel injection and throttle body, MSD coils and starter, Wilwood 14.25” rotors with 6 & 4 piston calipers, Budnik 20” & 19” Tungsten wheels, Ridetech TIGER CAGE, Dakota Digital gauges and climate controller, Vintage Air, and an OEM styled leather interior. The full list of features put into the “quick flip” car is long and filled with dream components resulting in the final package that you see before you.

When the GTO build was complete, it did not get parked to collect dust…it got put to work!!! With pro-touring builds and LS conversions being in such high demand Jon will often take customers who are on the fence about pulling the trigger on a build or conversion out for a little spin in the 68. More times than not, a white knuckle rip will open up a customer’s eyes to the smooth, yet brutal power of a LS engine, and the silky smooth, corner carving performance of an Art Morrison chassis. 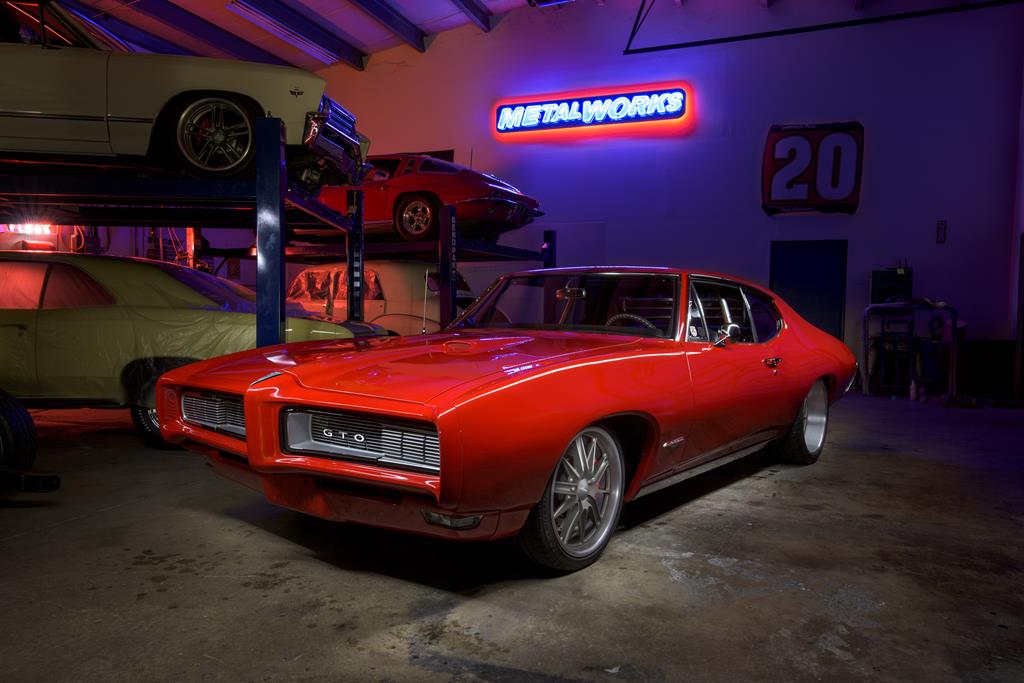 The stack up of all the components utilized in the GTO makes for a car that is truly a joy to drive…delivering comfort, incredible drivability, and insane power that still delivers economical gas mileage.

In the end, instead of a car to flip, Jon got a real keeper. A compliment Jon gets often in the 68 is that it is nice to see a GTO get the full treatment instead of one of the more common GM platforms of the era, as it is always nice to see something a little different.
If you see this red hot GTO out cruising the streets of Eugene, Oregon don’t be afraid to flag Jon down to chat about it…if you can catch him.

The Goat. The Great One. The Tiger. The