What kind of sick perversion would possess a person, driving them to create a drag racer out of a 1960 Peterbilt hot rod truck?

Plenty of people want to know, because the idea is more incredibly awesome than anyone could ever have imagined, and we know this because of the hot rod creation built by Randy Grubb. Grubb hit celebrity hot rod status when he sold an earlier creation, The Blastolene Special, a roadster powered by M47 Patton tank engine to car collector and talk show host Jay Leno.


Grubb is an artist in Oregon who made a living working with glass. Not so long ago, he has taken to creating hot rods that use diesel V-12s to rocket them forward, which is quite the strange setup.

But it is Piss’d Off Pete that takes the cake since it is a chopped Peterbilt that is so completely strange and off-putting at first, yet simply amazing piece of automotive art. You’re really not going to believe what he did to his 1960, Peterbiit model 351. Arguably one of the coolest hot rod truck modifications we have ever bared witness too.

The custom vehicle is made using a 1960 Peterbilt Model 351. After exiting Dr. Frankenstein’s lab, the thing is barely recognizable in any way. The engine is large and out there on Piss’d Off Pete. The Detroit Diesel 12V-71 of course has 12 cylinders, with each one displacing 71 ci for 852 ci total, if you’re not a math whiz. The engine is a two-stroke. Output measures 500 horsepower and somewhere in the neighborhood of 1,000 lb.-ft. of torque. There are two in-line 6-71 superchargers feeding the engine the necessary diet of fuel. Power is transferred to the rear wheels through an Allison 740D automatic four-speed transmission. 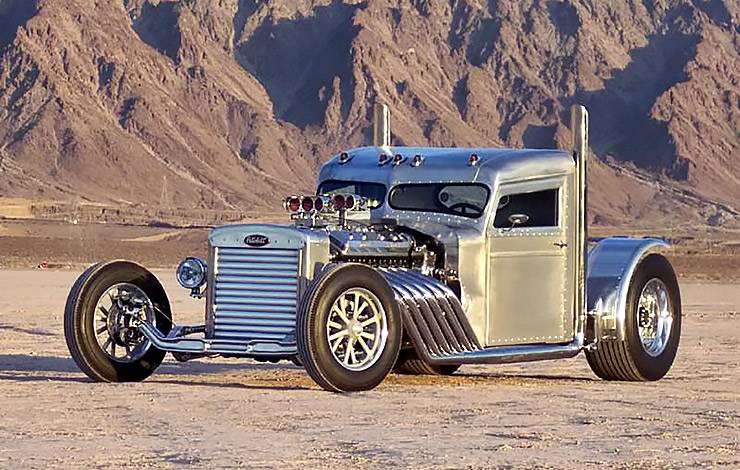 Providing stopping power for the beast on wheels is a brake system with discs and a hydro boost. There are plenty of details that Grubb added to the custom vehicle, making it even more unique. Chromed-out, stacked quarter elliptical leaf springs are visible. There are beam axles to handle all of the weight of the engine and cab, but they are styled by Grubb so that they appear more like what you would find on an old Ford hot rod. 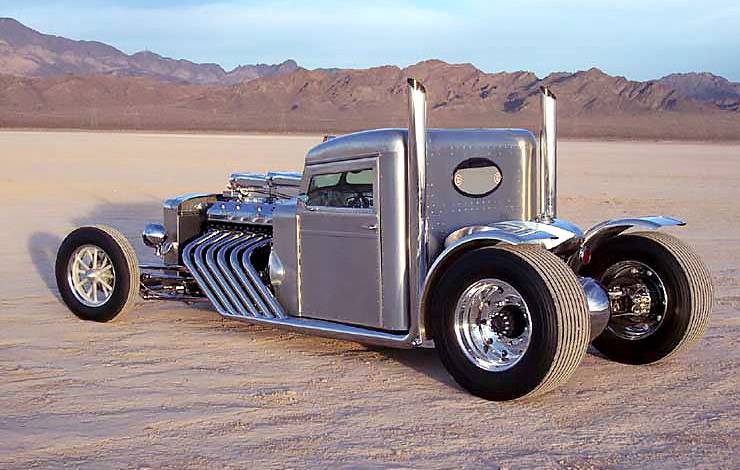 Calling the custom truck hot rod a monster is fair, because it is. Piss’d Off Pete is 17 feet-long and tips the scale at 7,800 pounds, making him far different from the classic hot rods he gets his good looks from. But that size makes for a road presence unlike any other.

The interior of Piss’d Off Pete is pretty barren, even Spartan if you will, which is not really a bad thing. The exterior of the vehicle is wonderful, but a cab that tried to one-up it would have really taken away from what makes the Peterbilt so incredibly cool. There is a simple steering wheel, a basic gauge cluster in the middle of the plain steel dashboard, and a pretty straightforward shifter coming out of a steel transmission tunnel. The doors are also plain steel with no cushy panel, but there are leather saddlebags attached to them so you can stash things, but it’s pretty unimaginable what a person would store there. Hand tailored saddle seats are covered in matching leather upholstery, helping warm things up a little.

One of the most difficult parts of building Piss’d Off Pete for Randy Grubb was fabricating the custom front wheels. He didn’t want to use something that didn’t fit the look and feel of the build, so he hunted high and low for a place that would create the vision in his head. Plenty of fabricators told him no because they were afraid of the potential liability, until a small Texas shop agreed to create the 12-spoke, massive wheels. According to some sources, these two wheels cost over $15,000, which shows just how dedicated Grubb was to making his Peterbilt hot rod perfect in every way.

One last thing: Piss’d Off Pete and Randy Grubb’s handy work won the approval of Jay Leno, the comedian car enthusiast who loves denim way too much. That’s quite the honor.