This is what you get when you put a tank engine into a ’50 Indy car: Meet the Blastolene Indy Special!

This monster rod isn’t the only one of its kind. When Street Rod builders Randy Grubb and Michael Leeds came across two M47 Patton Tank engines, they immediately bought them and began sketching ideas for cars to build around the massive engines. The first aluminum-bodied Blastolene Special made from the same car builder as this one, Randy Grubb, was quickly sold to Jay Leno.


This is the second and only other tank powered car built by the artists at Blastolene. Everything about this car is unique, from the chassis to the polished aluminum skin are all hand formed. This car was designed to emulate the Indy 500 cars racing during the 1950s. The hand-built aluminum body was formed in the spirit of the shark-nosed Watson Roadsters that were very successful at Indy in the ’50s and ’60s, but nearly twice the size.  With a 160″ wheelbase and an overall length of 270″, it’s no wonder that this creation weighs in at 8,400lbs. 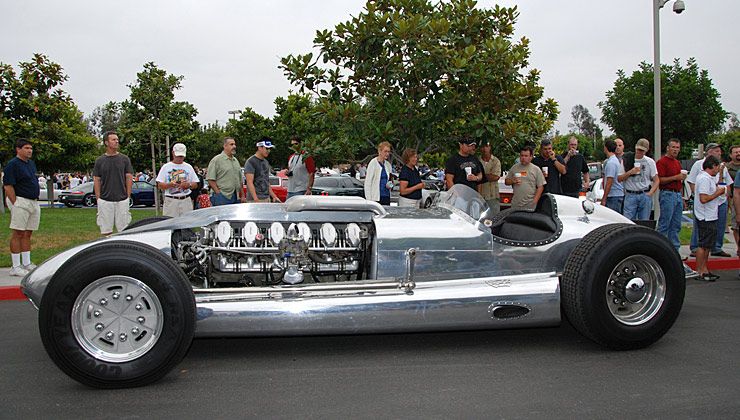 It all looks correct until you get to that gigantic engine that is the equivalent of 5 – 350 Chevy engines in displacement! The 1792cid SOHC aluminum V-12 engine is air-cooled and fed by dual 2-barrel carburetors. Power output is estimated at 910hp and 1500lb-ft of torque. The massive powerplant is mated to an Allison 4-speed automatic transmission that was originally designed to handle the workload of a Greyhound bus. Whenever this thing is started (and there is a procedure to doing this), people come running to see what it is. 4-wheel hydraulic disc brakes from a diesel truck, Eaton rear axle, and a solid beam semi front axle. The suspension incorporates Monroe shocks with airbags for ride adjustment, and the exhaust exits through exhaust cutouts on both sides of the body directly under the cockpit. 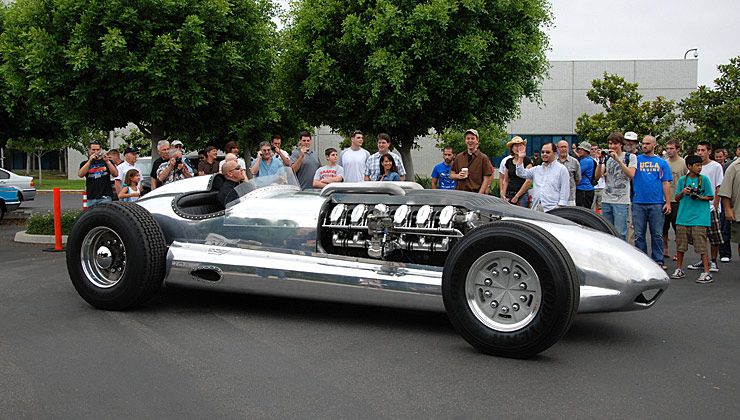 Although this car is not “race car” fast, the torque is incredible. Below is a video for you one-off types looking for something tasty to sink your teeth into.