There’s no need to add sugar because this sweet-as Nissan 200SX is already one tasty treat. 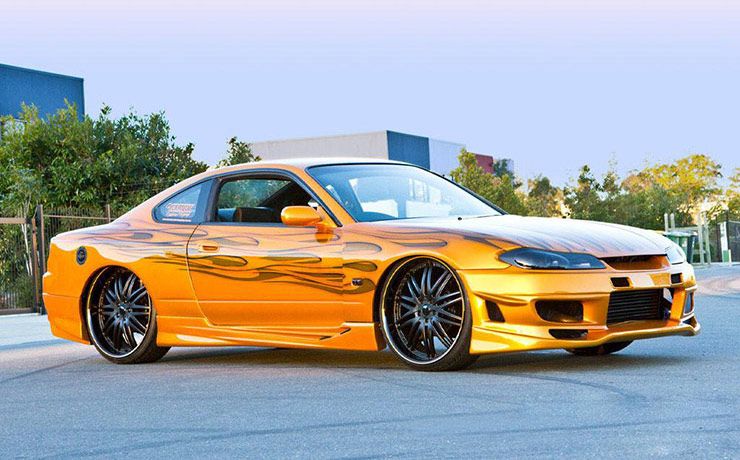 Brent admits he came across the S15 in a moment of serendipity. An offer was made to swap one of his company cars for the turbo coupe. In hindsight, he made the right choice. “The plan with the 200SX was to build a promotional car. We didn’t really have anything out there in the 4-cylinder scene and wanted to display our versatility, what we can cater for as a package,” he explained. “The S15 evolved in about six weeks. As it was progressing, friends and customers seemed to like what they were seeing. My whole team at iCandy Custom Resprays, as well as my missus Jana, are always supportive; it was a smooth, easy build for us, compared to some of the bigger, long-term builds we have on the go.”
– 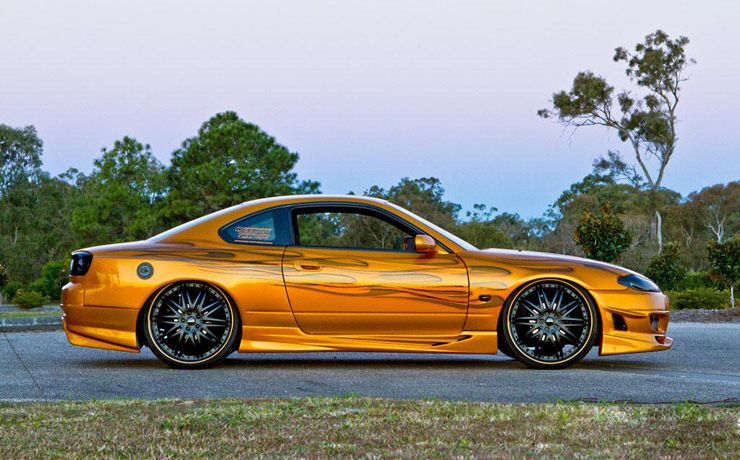 The 200SX was purchased with the wide-body kit already fitted to it. Brent and the iCandy Custom Resprays squad spent approximately 150 hours getting the aftermarket panels to fit properly: realigning them, getting the gaps even and generally making the bodykit work with the car’s inherently sexy lines.
– 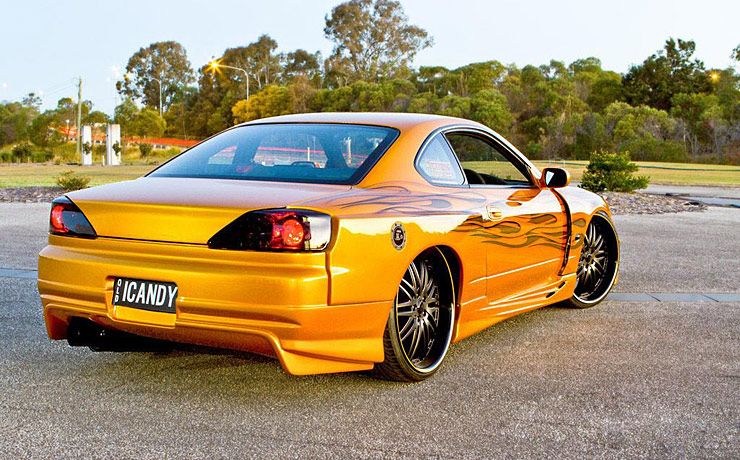 It took around 20 hours in the spray booth to apply the Pagan Gold Kandy base paint and Galaxy Grey flames, then a further eight hours to pinstripe the flame-work by hand and flow clear over the top of it all. Of course, all that time was in addition to the prep work between these stages: re-sanding, blocking, masking and so on.

“The paintwork was labour-intensive; even the wheels were masked out and painted twice. That’s not including the gold pin-striping on the outside of the rim, which was done by hand,” Brent explained. “But it was all well worth it – the car really works well with the body-kit and styling. The contrast of the wheels to the body has made the whole thing flow.” Brent feels he’s stayed true to – and enhanced – the essence of the 200SX’s innate sportiness. “The car has a race theme – a street-tough appeal,” said Brent. “We get a lot of comments on how classy the car is, yet tough at the same time, which is pretty cool because we deliberately stayed away from chrome.” 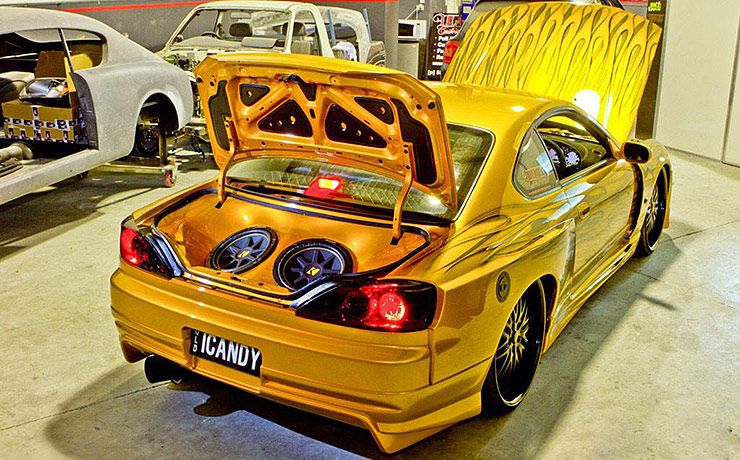 As a wildcard entrant at Meguiar’s MotorEx, the iCandy Custom Resprays 200SX scored a Top 10 finish in the Street Elite Showcase. However, Brent revealed that the weekend’s events were somewhat of a blur for him… “I spent three weeks prior working around the clock on Adam LeBrese’s Ford XC Falcon coupe on about two hours sleep per night,” he said. “There were even a few days in the end with no sleep until the moment the show opened to the public. The interior was put back into the car at 4am the day we were meant to be driving to MotorEx!”  “MotorEx is a great event that brings together the finest cars from all over Australia under one roof, offering something for everyone…” Not surprisingly, Brent was completely spent, both physically and emotionally, during the show’s festivities, so he didn’t spend as much time as he would’ve liked talking to the general public and gauging their reactions to his automotive creation.

“I did get around on the Sunday afternoon though, before the show ended, and got good feedback on it from people I knew. “MotorEx is a great event that brings together the finest cars from all over Australia under one roof, offering something for everyone,” explained Brent. “The quality of workmanship on the cars is incredible and can’t be truly captured until you’re standing beside them in the flesh. And the crowd is good – there’s a really positive vibe to it.” 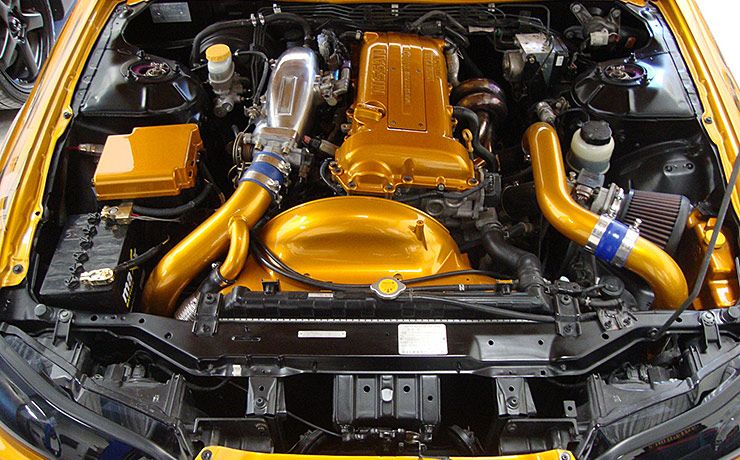 Brent and the iCandy Custom Resprays team are super-keen to wheel their 200SX around to more car shows and meets. They’re pretty amped to get it out on the street and really enjoy it too. “I built it to be very usable and will drive it as much as I can,” Brent said. “I haven’t had time to register it yet, but a few times I’ve put the shop’s trade plate on it and taken it for drive locally – it definitely gets attention.” 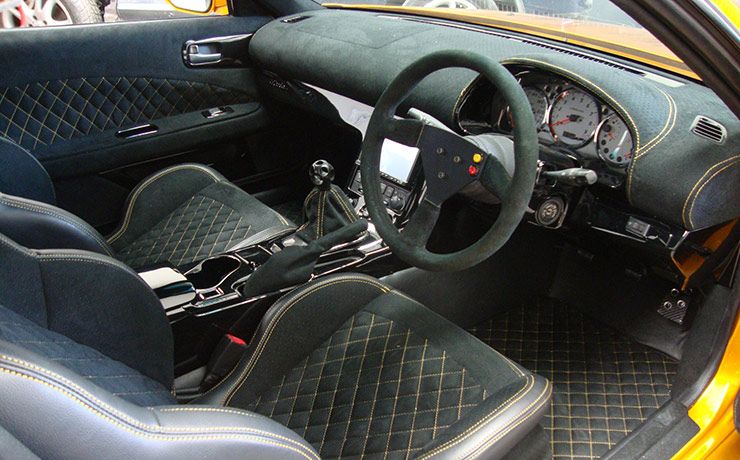 Brent Doring and the gang at iCandy Custom Resprays played a part in creating the Ford XC Falcon coupe that was crowned ‘Australia’s Most Impressive Custom Car’ at Meguiar’s MotorEx. When talking about its owner, Brent had this to say: “Adam LeBrese is a great guy; he’s so passionate about cars and loves what he does. I think he’s really creative and raising the bar for Australian car builders. It’s not an easy thing, what he’s done with that car. It takes a lot of hard work, time, sacrifice and discipline. The car is very innovative – I think it’s right up there on a world scale with the best.” 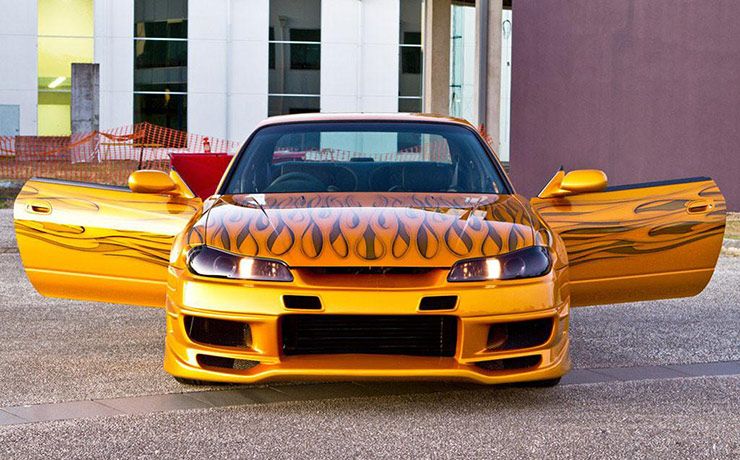