When Ford released the Model B coupe in 1932, little to do was made compared to the great fame the car would earn in years to come. 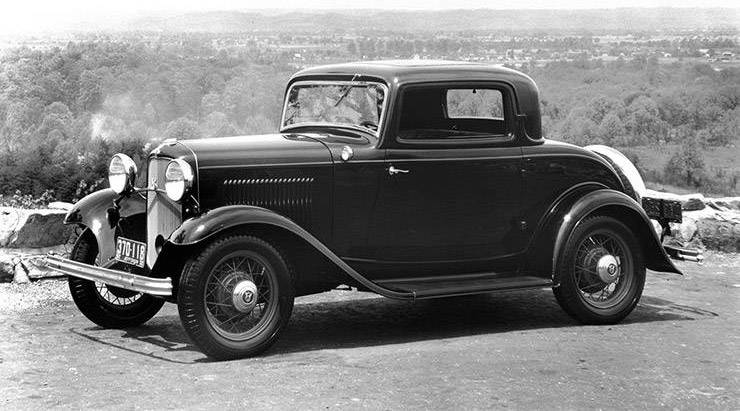 It wasn’t until the 1940s that the “Deuce Coupe” became highly sought after, earning a reputation for being the hot rodder’s speed buggy of choice. The Deuce remained a favorite all the way through the 1960s when the Beach Boys forever iconized the car with its song “Little Deuce Coupe” and today’s hot rod enthusiasts still pay a pretty penny to restore originals and build fiberglass models of this classic Ford speedster.

The V-8 Goes Mainstream
The 1932 Ford Model B replaced the Model A to revive lagging sales and offer car buyers a more elegant, comfortable ride.  In a Ford film promotion, the car was described as “graceful and compact, though roomy” with safety features unparalleled by any other economy car on the market making it “the most outstanding value” of the day. Buyers had a bevy of body styles to choose from, including a two-door roadster, two-door and four-door sedans, a sports coupe and a Deluxe, though the coupe and the roadster turned the most heads and earned the most sales.
–

But the big news was Ford’s Model 18, which it released that same year. The Model 18 featured the same styling as the Model B only it came with a V-8 instead of a traditional 4 cylinder engine.

This was the first time that an auto manufacturer had offered the en-block—a one piece V-8—in an affordable model and its 65 horsepower secured Ford’s place as the country’s automotive leader for the next 20 years. You could purchase a V-8 coupe for as little as $490 and a convertible sedan would run you only a little over $150 more.

The Best-Looking Ford To Date
The Deuce Coupe rode lower than its Model A predecessor, which translated into a sleeker look and improved handling. One journalist described the car rather poetically in his review, “In the new Ford car the eye is caught by the bright beauty of the rustless-steel head-lamps, and travels along the bead on the side of the hood toward the rear of the car [giving] the impression of an arrow in flight. The bodies are fresh and modern, from the gracefully rounded V-type [vertical-bar] radiator to the rear bumper. The convex lamps, full-crowned fenders and long, low running boards harmonize with the balance of the design.” 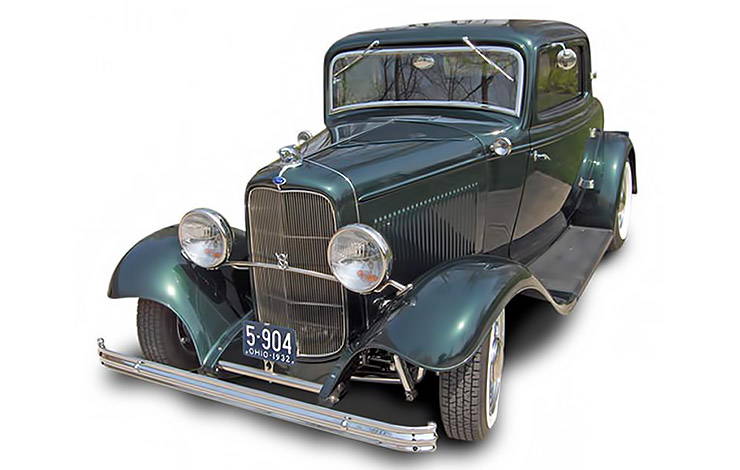 On the inside, the remodeled Ford was roomier than ever and instruments were beautifully mounted in a sleek mahogany-like panel—a styling cue taken from Lincoln. And depending on budget and preference, buyers could customize their Ford’s interior by choosing between fine wool, mohair, and leather upholstery.

The Model B In ’33
In 1933, Ford introduced a new cross-member frame, extending the wheelbase 6 inches from 106 to 112. The V-8 now came standard and, with a few tweaks, Ford engineers increased its horsepower to 75.  And while most buyers went for the extra power, you could still opt for 4 cylinders—unofficially deemed the “Model C’ engine. 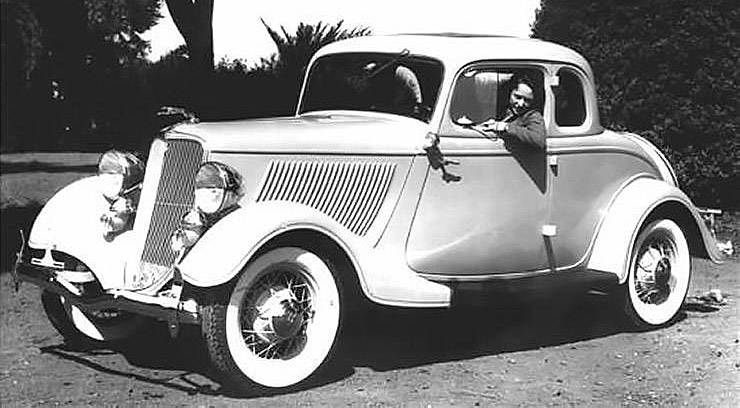 On the outside of the car, the grille and hood lovuers adopted a more curved, sloping look.  Fifty years later, ZZ Top made the 1933 Model B famous again by featuring the rock star’s own three window coupe, nicknamed the “Eliminator,” on an album with the same title.

The California Car
For 1934, Ford flattened the grille on the car it now termed the Model 40A. The V-8 engine gained 10 horsepower, leaping from 75 to 85. The 1934 model year signaled the end of Ford’s signature Victoria body style and, thus, was also the last year that Ford manufactured the 4 cylinder engine, which didn’t fit in the updated 1935 body. 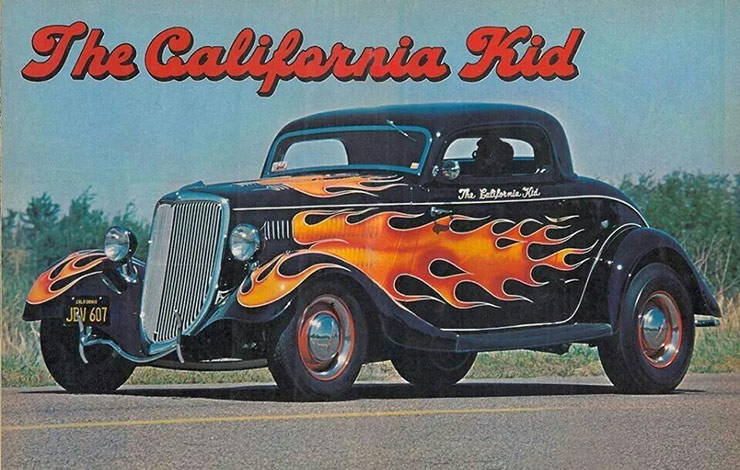 Culture of the Coupe
Although Ford offered 14 different body styles between 1932 and 1934, one style in particular captured the public’s attention and secured its place as the car to hot rod:  the 3-window coupe.


The Beach Boys weren’t the only ones to croon about the “little Deuce Coupe,” for example. Bruce Springsteen sang about the 1932 coupe in his song “Blinded by the Light,” which Manfred Mann later reprised. And a decade after “Little Deuce Coupe” echoed a generation’s adoration for the 3-window classic, George Lucas made the car cool yet again in his film American Graffiti, putting Paul Le Mat in a bright yellow 1932 coupe. 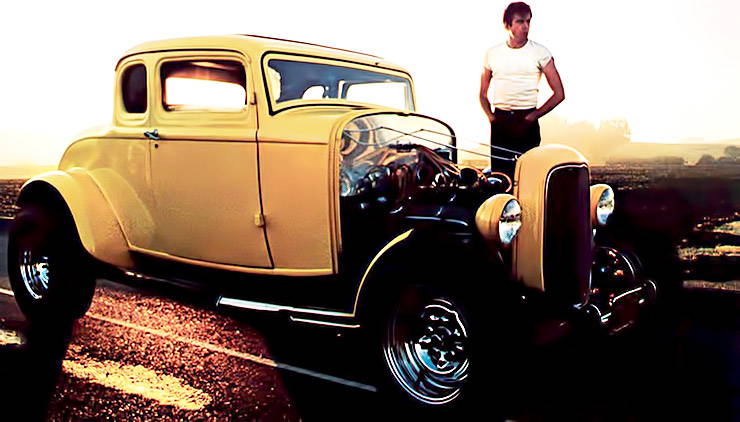 Five years later, The Kid—the speed maniac in Stephen King’s novel The Stand—drove a Deuce Coupe into fiction history. But, perhaps the most telling example of the breadth of the 3-window coupe’s influence on popular culture is its appearance on the stage as a ballet—“Deuce Coupe”—choreographed by legendary dancer, Twyla Tharp. 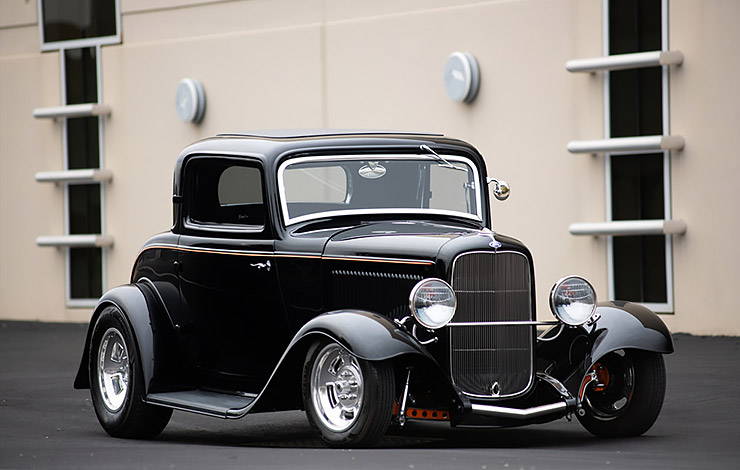 Today, more Deuce Coupes ride the roads than in 1932, though the majority are fiberglass or steel hot rods, which aren’t only less expensive, they’re lighter and speedier options than the originals. That said, there isn’t a hot rodder who wouldn’t like to get his or her hands on an original Deuce.