Beautiful bikes don’t just happen – they come from inspiration and, yes, some degree of perspiration, too. This bike is no exception. 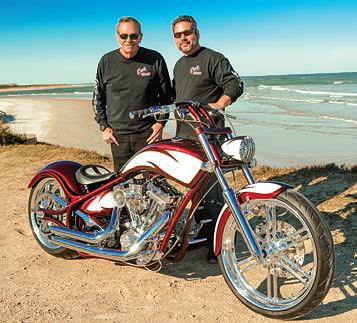 The Carl’s Speed Shop owner, Carl Marrow, is a world-class racer and tuner of Harley-Davidson bikes since the early 1960s. He holds or has held 68 national speed records, including Bonneville, and achieved fame for building “The World’s Fastest Harley.”
The famous speed freak Carl Morrow has the essential hallmarks of a great one; an iron will to challenge what others say is ‘good enough,’ the creativity necessary to render a solution, and the attention to detail that puts the rubber to the road – and the records in the books. That’s why he’s been in the business of speed for over 40 years, and it explains how the Bad Dog custom bike has evolved from an idea in bare metal to the sleek street machine you see here.

From the beginning, the Bad Dog was inspired by that will to take something sufficient and make it better. While the twenty-five thousand Big Dog owners out there would probably argue that their bikes were already fine, thank you, Carl saw it differently. His trained eye fell on dozens of areas for improvement, to the point where the Bad Dog shares little with its canine cousins except for the frame. It’s styling is evocative of a trend that never goes out of style: dignified elegance.
– 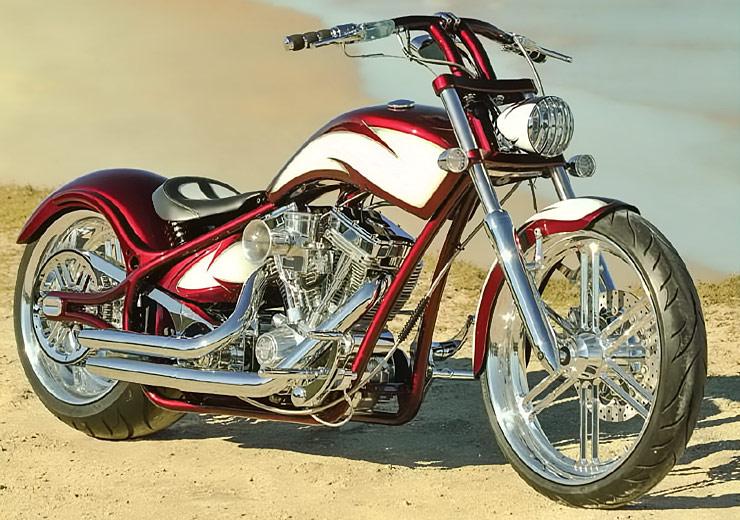 Both inside and out, it’s an entirely different beast. Try to look past the beautifully balanced paint scheme, and you’ll notice functional improvements everywhere. Sleek, attractive hand controls and switches from Hawg Halters replace the original issue plagued proprietary wiring setup, while the fold-out license plate bracket, a literal tripping point, has been smoothly grafted onto a massaged and extended rear fender.

Carl sure wasn’t going to put his name on something he couldn’t trust. Speaking of putting his name on something, check out that wicked looking velocity stack poking out from between the cylinders. It’s the crown jewel on a unique Carl’s Speed Shop part, the all billet aluminum Typhoon carburetor. Designed around a constant velocity platform with a side mounted float bowl, Carl uses it on his own builds for its accurate metering and simple adjustment. There are considerations related to horsepower, too, but you probably already knew that. 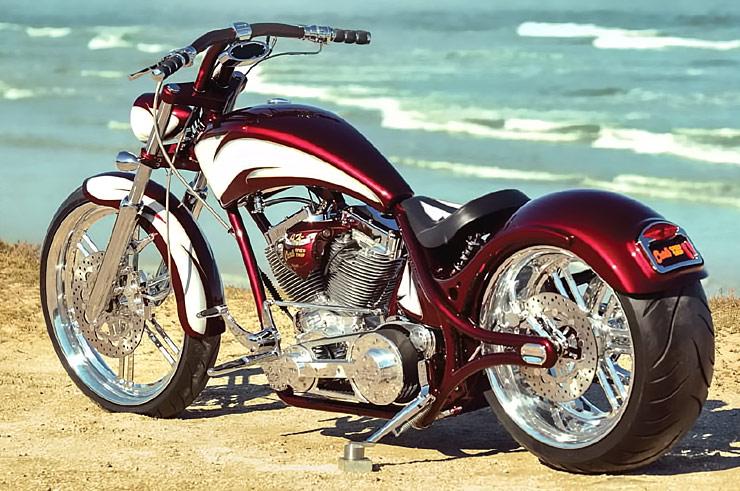 The Typhoon feeds a 117” S&S motor that also got Carl’s treatment up top, and dumps the exhaust out of a custom pair of stainless steel pipes that Carl and the guys fabricated near the end of the build. While it would be dramatic to say that a bike like this was only finished at the last minute, it’s just not the case. Reaching the deadline was no easy task, but years of building bikes and power has taught Carl the value of foresight and planning. “Besides,” he points out, “you never really know if your suppliers are going to get you what you need on time, so you’ve got to plan ahead.” The foresight paid off late in the game, when difficulties cropped up getting the primary drive in hand and on the bike. But there it is, proof of the value of planning. There are other reasons to take this experienced approach to bike building that Carl is happy to point out. “Think about it,” he says, “you can’t get more than 8 or 9 consecutive hours of good work out of any good craftsman anyway. If you want it done right, you have to budget your time so that the work can be done properly.” It’s easy to see from the pictures that the work has indeed been done right. Carl’s tenacity and experience, built on a solid foundation, have resulted in a proud testament to what all racers seek: more power!
Source