To get his disabled truck out of traffic a FedEx truck driver masterfully handled his truck while carefully sliding it down a very slick interstate incline near Truckee, California.

A FedEx driver kept his composure when his 18-wheel truck jackknifed at the high point of the snowy mountain pass near the California-Nevada border. The driver was pulling two trailers when the truck jackknifed on Interstate 80 near Floriston near the Donner Pass, a pass in the Sierra Nevada that rises more than 7,000 feet at its crest. 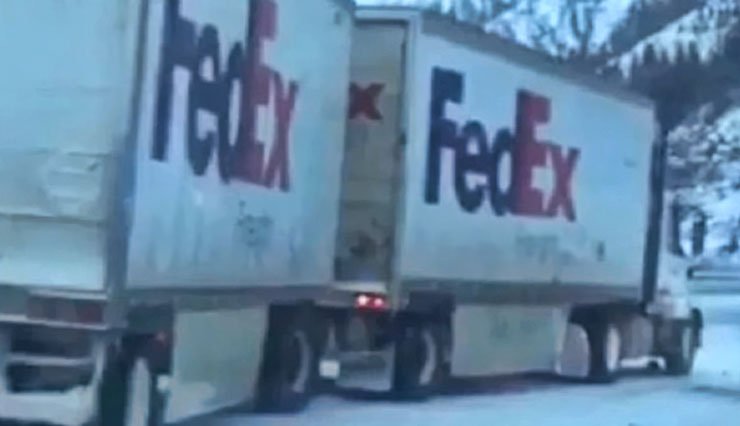 California Highway Patrol came up with a hairy plan to get him out of harm’s way, officials said. Seeing it was unsafe to tow the truck from its location, CHP officers asked the trucker to see if he could drive down the grade to the next open shoulder along the highway.

“We asked if he felt comfortable dragging the trailer down,” CHP officer said. “He was confident he could do it. We said we would give him the space and he made it happen.”

CHP blocked the traffic and escorted the truck as it slid, or drifted, down the road to the next shoulder area. This location was a safer spot for the truck to wait for a tow.

“Within 20 minutes, the driver was able to bring the rig to a stop at the at the bottom of the hill near the Floriston exit, where a tow truck was waiting” police said. They had the truck out of danger and the road re-opened for normal use.

This driver did a good job keeping his truck on the road considering most of its wheels turned into skis.

“I can’t believe that worked,” one CHP officer is heard saying on the video after the truck came to a safe stop.

Stay safe up there.