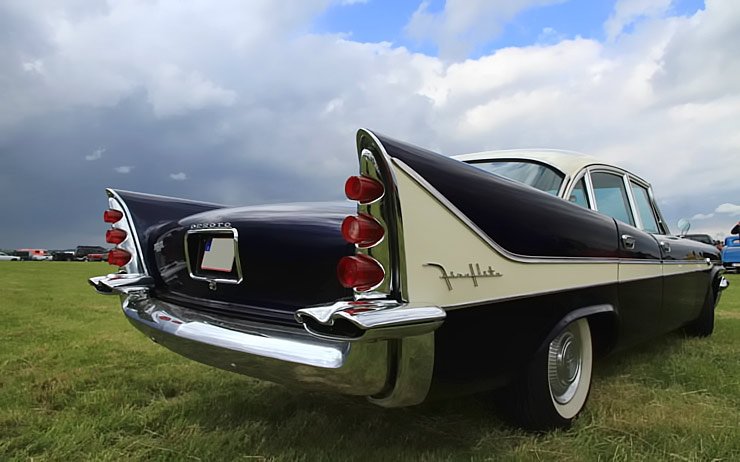 Stacked taillights on the 1958 DeSoto FireFlite show the division’s variation of their fin design. The manufacturers used every conceivable design trick to create a uniquely styled tail fin all their own.[/caption]

Directional stability is what these Virgil Max Exner-styled tail fin cars were said to offer as compared to conventional body shapes. In a report done by Chrysler in 1957 (relating to a special concept car called the Dart), the company offered statements from Exner. “Two aerodynamic effects are involved, which are pertinent to this discussion. One is the resistance of the air to the passage of the vehicle, known as aerodynamic drag. The other is the effect crosswinds have on stability of the vehicle’s movement — its ability to travel straight along an intended path. Since the dart — or wedge — shape was so common to airplanes and boats, it was familiar to the public.

“In Detroit, we knew, of course, that the teardrop has the least wind resistance. From the wind resistance standpoint, this shape is good. However, its stability in crosswinds is poor. The only way to stabilize the car without destroying its good wind resistance properties is to use fins. This results in a dart — or wedge — silhouette. This shape is used for aircraft, racing boats and cars and missiles for the same reasons. Our styling approach, then, was based on sound aerodynamic principles, which were verified by wind tunnel and actual performance tests. Good stability in crosswinds eliminates some of the need for steering corrections by the operator. This reduces driver fatigue, thus helping improve conditions for safer motoring.”

During the development of the 1957 models from Chrysler Corporation, there was testing done using a 3/8-scale plastic model of a DeSoto on a turntable and it was weighted down with 500 pounds of ballast. It had detachable fins of various sizes for comparison purposes. The model had moving wheels, a miniature cooling system (including an operational fan to replicate a 1:1 real car) and the undercarriage of the upcoming car was duplicated in minute scale detail to best replicate air travel around the car, front to rear, side to side and at sideways angles. “With the high upswept fins of our 1957 models,” said Exner, “tests showed that road-holding stability was improved by as much as 20 percent in strong crosswinds at normal highway speeds.”