Oldsmobile Toronado is historically significant as the first U.S. produced Front-Wheel drive automobile since the demise of the Cord in 1937. It took a Cord owner to point this out, but there was a lot of the old Cord in the Toronado. Consider that front-wheel drive, combined with the latter’s front end, hidden headlamps and big slotted wheels. It’s doubtful the Toronado will ever reach the classic heights of the Cord, however. There were a lot more Tornados, for one thing. But it is certain that the 1966-67 models are among the most desirable Oldsmobiles ever built.

The Toronado won the 1966 Motor Trend Car of the Year Award in the U.S. Not just that, Toronado was also honored as the just one American model has ever attained as high as third place as European Car of the Year that same year. There’s no denying the appeal of the Toronado’s shape, but Oldsmobile built it as a personal luxury car to compete with the Ford Thunderbird.
– 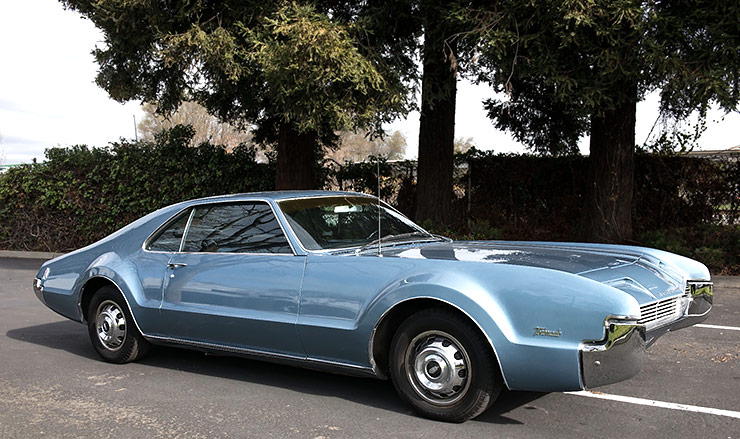 Project engineer Andy Watt’s goal was to combine traditional American big-car power with outstanding handling and traction. Toronado’s 425 ci V-8 was shared with conventional full-size Olds models, but was teamed with a new “two-piece” transmission. The torque converter was mounted behind the engine, the gearbox was located remotely under the left cylinder bank, and both were connected by a chain drive and sprocket. 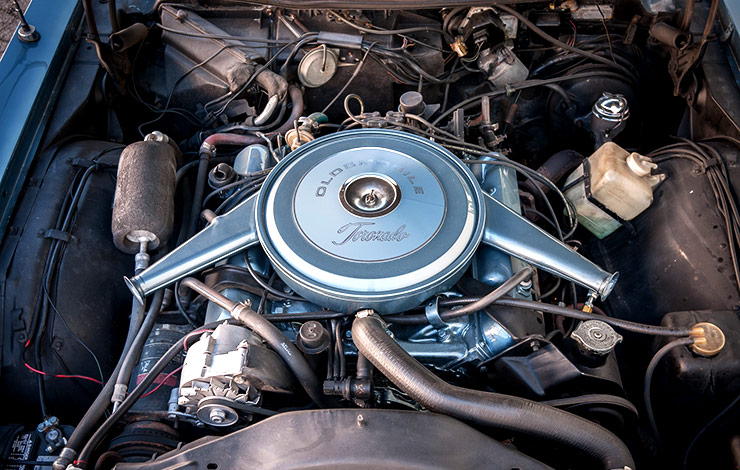 The virtually unbreakable yet flexible chain drive was developed to save weight and cut costs. It also resulted in a very compact engine/drivetrain package, and a front / rear weight distribution of 54146-remarkable for a front-wheel-drive car.

Toronado styling was as sophisticated as its mechanicals. The C-pillars fell gently from the roof, there was no obvious beltline aft of the rear windows and the roofline flowed downward smoothly, into a rakish fastback. The curved fuselage was set off by boldly flared wheel arches. The front and rear were clean and wrapped tightly underneath, as were the sides.


The public responded enthusiastically, and over 40,000 Toronados were sold in the first model year. However, this was only an initial spurt, and sales were half that high in 1967. Gradually they worked their way back, and in banner year 1972, Oldsmobile produced nearly 50,000.