Eric Conner, the owner of SoCal Suspension in San Diego, CA, turned the 1950 Chevy Sedan Deluxe from a stock looking ride to the kustom work of rolling art that it is today. And he did that in a whopping 7 months. 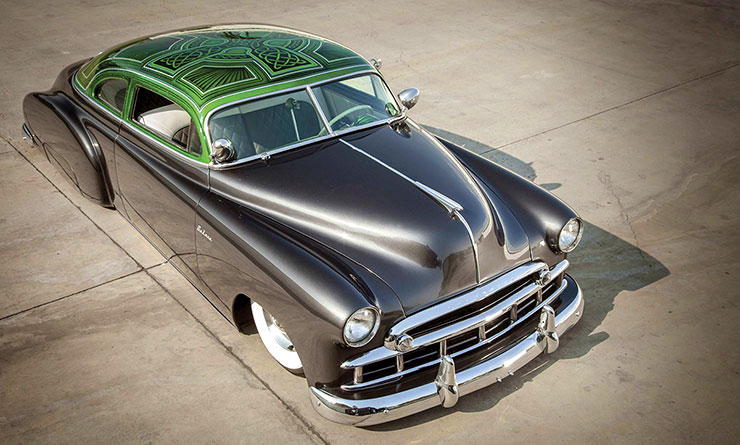 The post-war years in America were spent getting back to a new normal. Americans had been through more than two decades of industrial-strength misery: the Great Depression followed by the horrific losses in World War II.

When the war ended, automakers were faced with the great challenge of retooling for peacetime and getting products back into dealerships. Detroit put 1941-vintage products in showrooms in 1946, which made it possible for people to buy new cars. However, these first post-war automobiles were lackluster and dated at best.
– 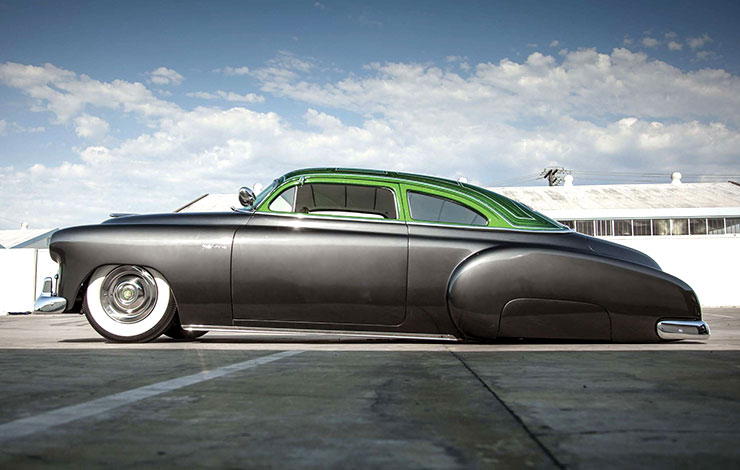 In 1949, Detroit automakers went head to head with totally new designs, which signaled a true end to the war and the beginning of a new era of automaking. Chevy and Ford were clearly the most visible redesigns. Chevy’s redesign was a super slippery execution with old-school bolt-on quarter panels and the Stove Bolt Six, yet it had a lot of character.

“I wanted to build a 1949-54 Chevy, which prompted me to look on Craigslist like everyone else has,” Eric said, “I am not a dreamer, I am a ‘get this stuff done’ type of guy.” Eric went on to say, “A friend of mine in Upland, California, found this ’50 Chevrolet sedan. So I took a little drive north with my trailer and got it. It was rough, to say the least. I hauled it back to San Diego and gutted it completely.” 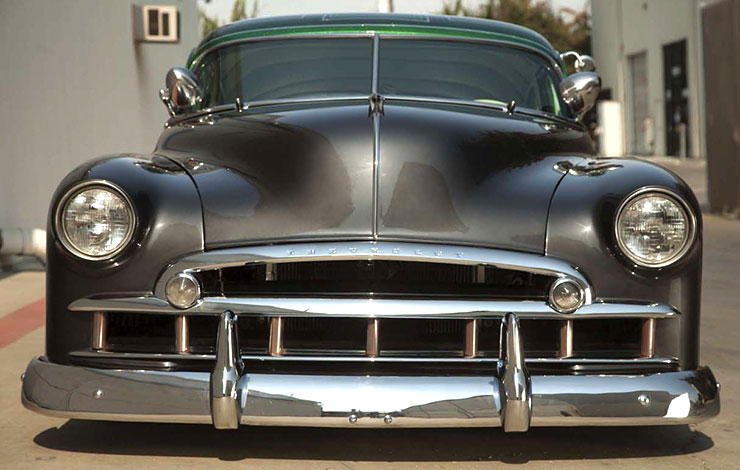 You can imagine Eric’s rush of euphoria when it was time to tear into this car, “I’m a suspension and motor guy, not a painter or body person,” Eric notes, “So I started with the chassis.” Eric stresses how important stance is to the way a car looks. “Stance is everything to me, along with how a car runs,” Eric tells us. 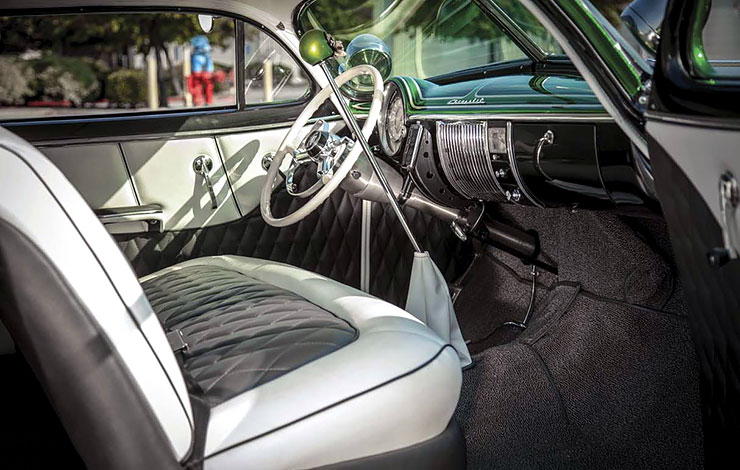 Eric’s approach to car building is pretty fundamental. He began this build with an independent front suspension, frame reinforcement, 4-link rear suspension, and airbags. When he had a roller, he and his buddies went to work chopping and shaping raw steel. “A lot of late nights for sure,” Eric laughs. 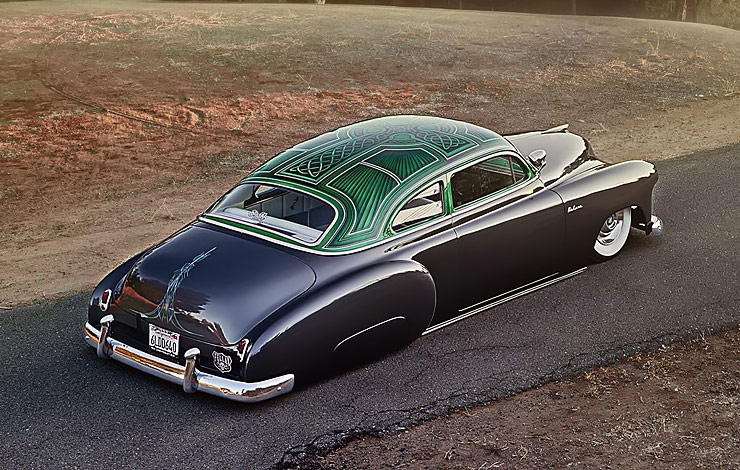 The roof was chopped 4 1/2 inches which is modest enough to make it easily street-able but still noticeable enough to give the roofline some aggressive flow.


Once Eric had the body and chassis work out of the way, he fitted it with a 5.7L V-8 and transmission along with a GM rear axle from an ’85 El Camino to create a shakedown vehicle ready for testing. “Oh, and did I mention being on the interstate wearing goggles?” Eric adds. 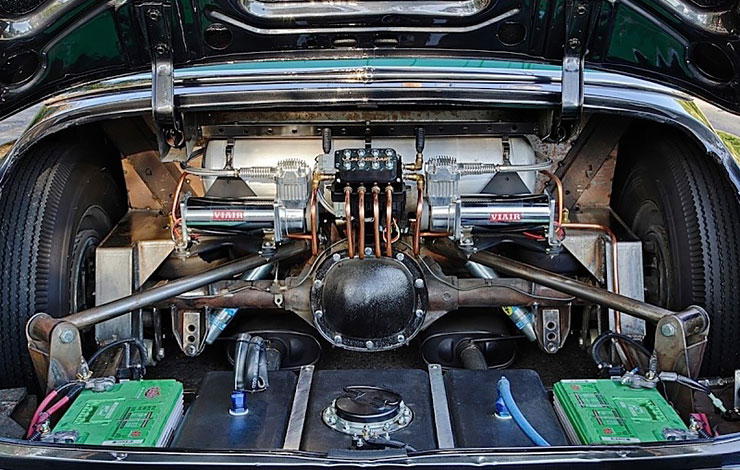 Once Eric’s research and development efforts were complete, he stripped the car down to the bare shell and hauled it to Nick Battaglia of Loose Cannon Customs in San Diego for cosmetic surgery and a House of Kolor urethane treatment.


Old Chevys need to be Chevy powered, so Eric went with a 1997 vintage small-block Chevy Vortec V-8 4L60E overdrive automatic and a 10-bolt rear axle in order to thrust his custom ride into a new age of power and durability. For some authentic flavor, Lucky Deluxe rolls on the original 15-inch steel wheels wrapped in 670 Firestone Bias Ply with prominent 3 1/2-inch white walls. 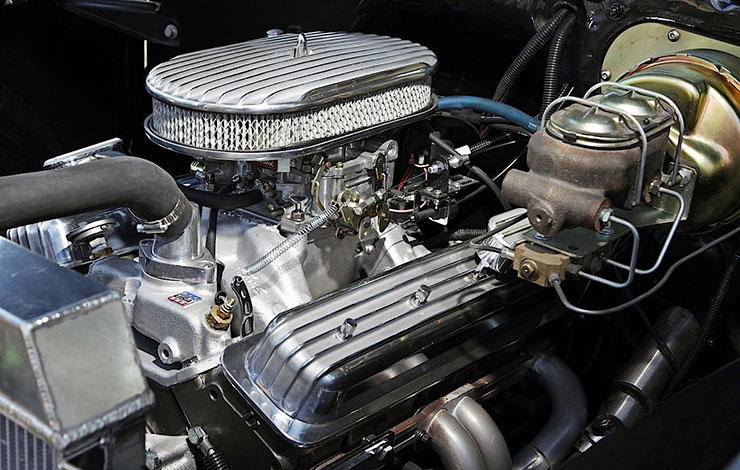 Mechanicals coupled with sweet aesthetics make the experience, and Eric has finally arrived at the pinnacle of what he knew he could do. “Follow your eye and your tastes, if you follow what you think and what your heart wants who cares what everyone else’s opinion is. Building and standing behind your work is what gains respect” he said. 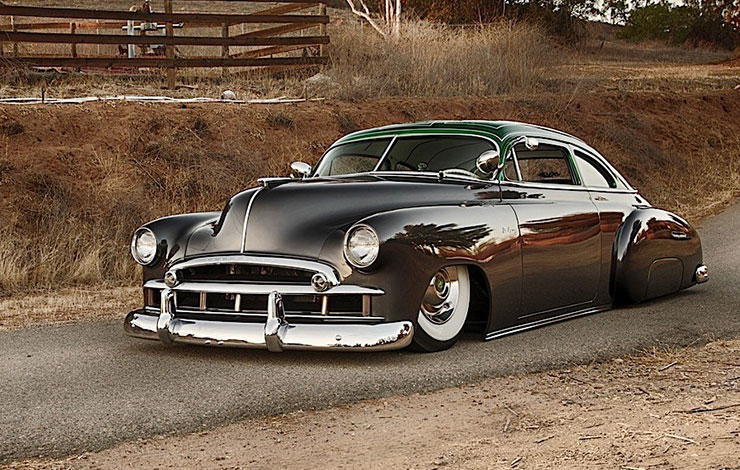 The end result is a kustom that is truly special–one that blends the very best of classic aesthetics with modern suspension systems. 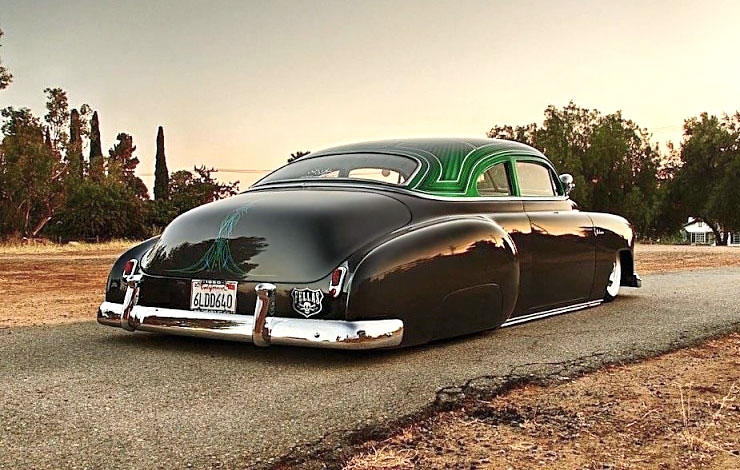