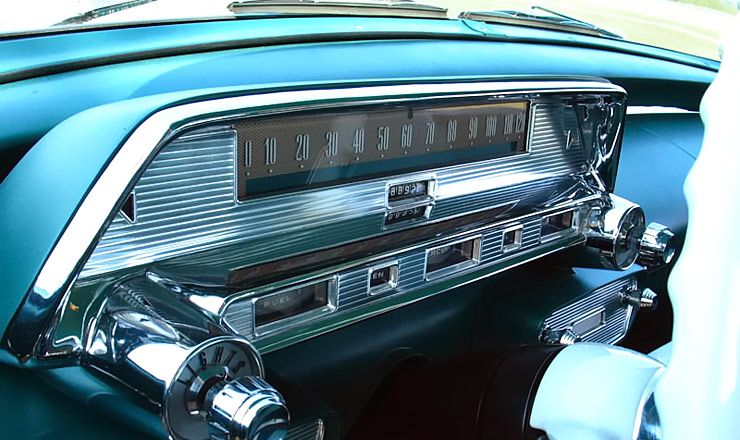 “What surprised me is how little this whole thing was known. I thought it would dumbfound a few people, but it really caught a lot of people off guard. I have friends in their 60s, and they’ll say, “You know, I thought I knew Fords but you pulled one on my.”

But Brian built the car for another event — the Pure Stock Drags. Crowds in the motel parking lot the night before got a sneak peek. In the sunlight at the track Friday morning, the mighty Merc was stunning.

A leisurely shakedown pass to make sure the car drove straight and the brakes worked produced a 15.17 second ET. From there Brian worked the Merc down into the 14s, but had his work cut out for him trying to launch the 4,264 pounder on super skinny 8.00 x 14 tires. Finessing the 3-on-the-tree shifter also some practice.

By Saturday afternoon, Brian had been pitted against a 350hp ’70 Chevelle SS396 with a 4-speed. In Round One, the Chevelle got the jump, but by the 60-foot mark, Brian grabbed it all back and then some. From there Brian let the big-cube Merc wind out against its 4.56:1 axle.  When the two-toned Merc flashed through the traps to take the win light, a roar went up from the stands. With his unknown, unproven warrior, Brian had just knocked off one of the most popular musclecar icons.

Round Two held good news. And bad. Brian cut a wicked .030 light then jumped out to a decisive lead. This one was all Mercury. Brian shut out the Chevelle with a blazing 14.07 @ 100.40. The bad news was that, as an anti-sandbagging rule, the Pure Stock Drags disqualifies anyone running 3-tenths faster than their qualifying time. So his best ET was also his ticket out.

He’ll be back of course. Brian understands and appreciates the challenge of the Pure Stock Drags, and feels like the car should do 13.80s. There were plenty of faster cars, but this year he stole the show and was clearly the crowd favorite. His only real dilemma now is what to do for an encore.