Bikes are small, nimble, rebellious, noisy, spiritual and exciting. Now think of something monolithically large. You will get one uncommon form of transportation, which will confuse even the bike enthusiasts. Big Toe is just another example of monstrosity on two wheels.

Big Foot of course was the world’s first largest pickup monster truck, so naturally a monster bike should be called Big Toe.
Created by Tom Wilberg, a man from Sweden and took five years for him to be able to make this monster bike that was completed, Big Toe is powered by a 1975 V12  5.3 Litre E Type Jaguar engine.  This single overhead cam engine has 2 valves per cylinder and  produces 300 HP, while  45mm twin choke Weber carburettors combined with a bespoke stainless muffler system deals with the exhaust and all this gets the bike which weighs 1645 Kg’s up to a top speed of around 100 Kph or about 62 mph. 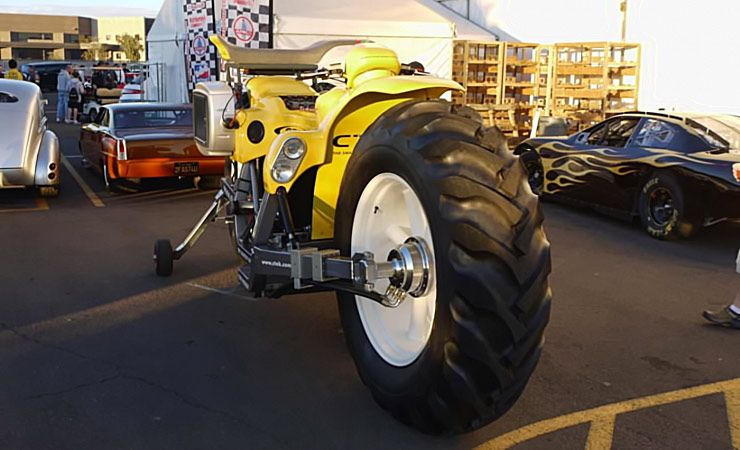 The Jaguar V12 engine takes up a lot of space underneath the rider’s seat. Visible in this photo too is the huge fan needed to help the engine cool. There are also 3 oil coolers and 2 water coolers keeping temperatures as low as possible. 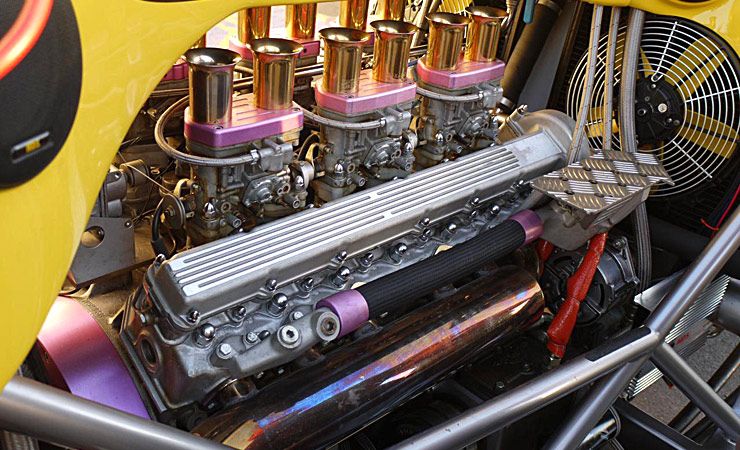 The bike is 15-foot 6ins long, 7-foot 6ins high and 4 foot wide.  The overall bike looks impressive except for the big stabilizers that remind me of my first bike as a baby boy.  These are necessary though… The big stabilizers at the rear of the bike however are there (not surprisingly) to stop the bike from falling over. Not only would the rider be in for a six-foot drop to the ground with 1.5 tons of bike coming down on him but also it would need a forklift truck to get it back on its two wheels again. These stabilizers can be raised at the press of a button if the owner dares!

I would  like to see this bike ridden without them altogether though, if things got bad maybe an ejector seat would be the answer.

The bike is hydraulically driven as opposed to a chain or prop shaft drive. The front wheels are also hydraulically steered and the photo below shows the steering arms in close detail.

The bike is fitted with hydro-pneumatic suspension that gives a smooth ride on this behemoth and a Kenwood 500 Watt, 10 inch Bass, quadraphonic speaker system plus CD-changer is also incorporated for extra comfort!

The “dashboard” on Big Toe is fully computerized and utilizes an electronic box from a wood processing machine, this handles all the hydraulics also a remote control is connected to all the functions. 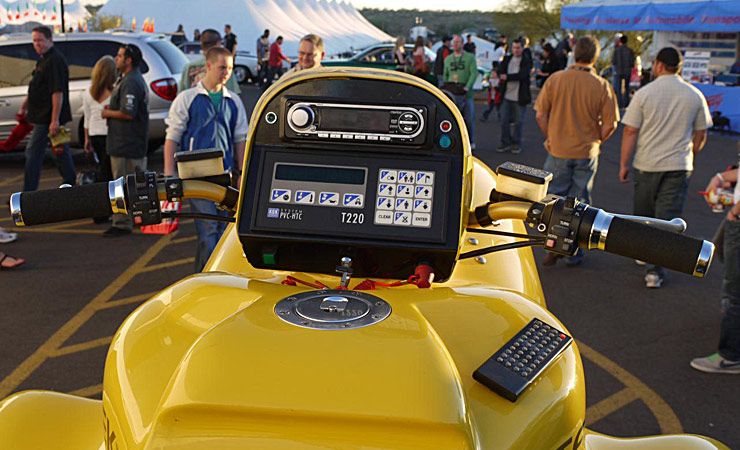 The Firestone 18-4-43 tires are the biggest ever fitted to a bike. Two hydraulic transmission pumps are used to operate the bikes steering and another two for the suspension and stabilizers.

Tom Wiberg started the project to build the bike in 1992 when he started off by constructing the wheels, by 1993 he had made the rear frame assembly along with the successful fitting of the rear wheel hub onto the hydraulic arms.

By November 1993 most of the framework was complete and into 1994 the big tires were finally made with rounded off edges just like the tires on a normal sized bike. By September 1994 the frame and engine were ready along with many of the hydraulic parts. Reference to the gearbox Tom Says this: ” I had to build many of the parts for the transmission myself…The gearbox is made from a solid block of aluminum.” 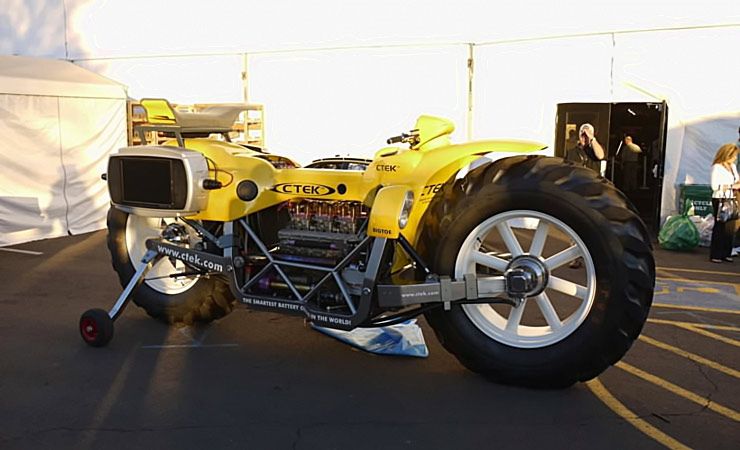 By June 1996 the second hand Jaguar V12 engine to be fitted was fully restored and finally installed into the bikes huge frame, and by November 1996 the bike was ready for its first trial.

Tom remarked that all went well with the initial test, the engine ran smoothly and all of the hydraulics worked properly, it was a success! Work continued and from 1996 onwards the fiberglass shell was constructed and the bike was eventually finished with nice neat paint job in 1998 after a total of 3000 man hours.