In the 1970s bellbottom jeans and velour shirts were high fashion, disco sucked but dominated the airwaves and custom vans were the rage in the automotive world. 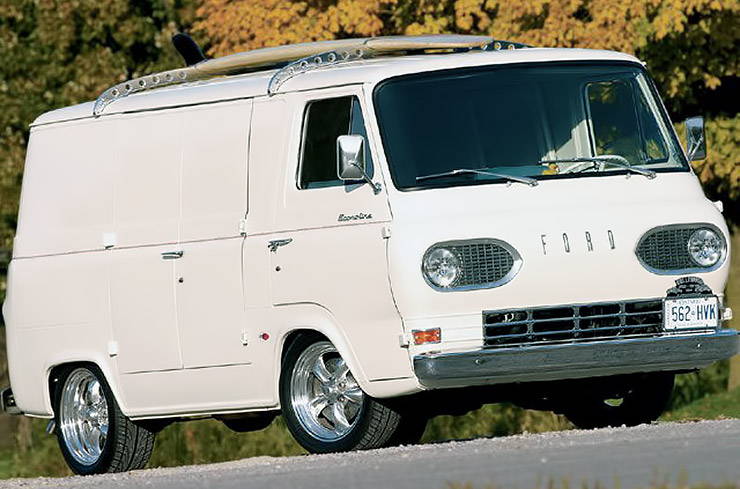 Some of those things have rightly been relegated to the dust bin of time but while the van scene went into hibernation in the mid-to-late ’80s it never really went away and still has a pretty solid following.
–
Ken Hopkraft was a child of the ’70s and was definitely a fan of the scene. He was smitten with the van culture from its beginnings and remembers hanging around outside a variety store on his bike when a bunch of vans pulled in to get gas. “I thought they were pretty cool,” he says. “Having your ride and accommodations all in one.”

Even as a kid his van of choice would have been a first-generation Econoline. He liked the Econoline’s iconic front styling and bought his first, a pickup, when he was only 14 years old. “I did get it running but I had big dreams and no knowledge.”
–
By the time this ’67 Econoline 8-door cargo van came into his life in 1999, he was a licensed mechanic with plenty of experience with Econolines.
– 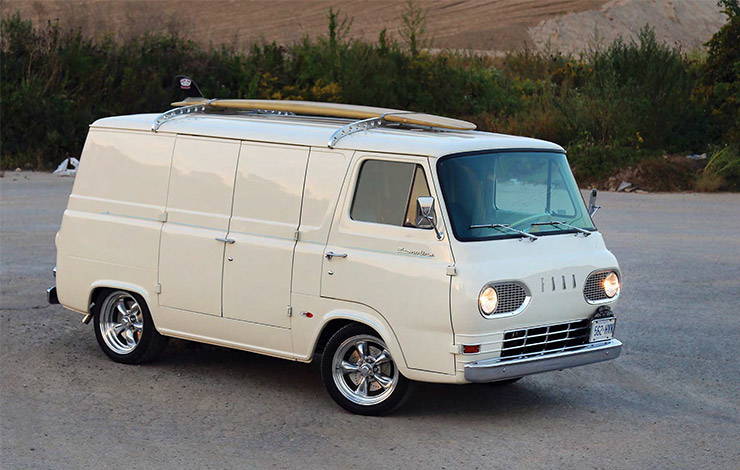 He also already owned an Econoline van, but only for a few days. He had been trying to buy the white 8-door van since the first time the then owner, David Hughes, showed him photos at a cruise night in the summer of 1999. “I was there with my Pro Street Econoline pickup and he introduced himself to me and said he had this van and was looking for parts and advice for it. Right there I started hounding him for it,” says Hopkraft. Hughes wasn’t yet ready to sell.
– 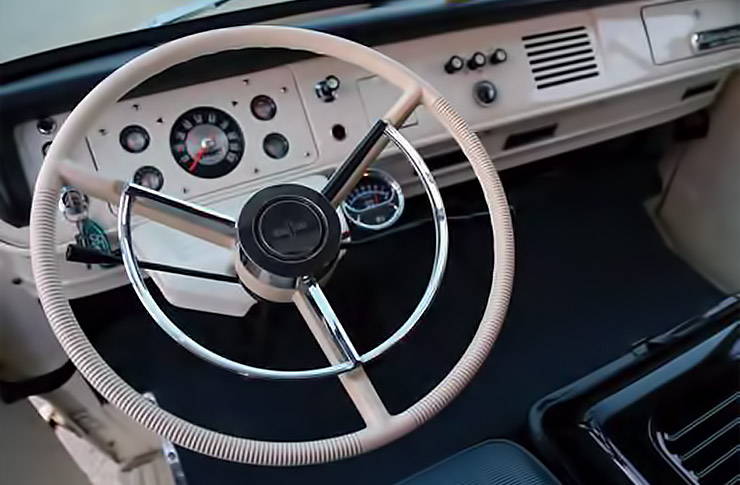 But later that same summer a message on his answering machine had been left by Hughes: He was ready to sell. “His brother was getting married out west and he needed the money.” Hopkraft didn’t hesitate. Vans as rare as this and in such rust-free, original condition just did not come around that often. It was as basic as they come with just a driver’s seat, no radio and with the base drivetrain of a 170ci straight 6 and a 3-speed manual shifted on the column with the small light duty, 3:50 geared rear end which had a 7.5” ring gear.

Once it was in Hopkraft’s shop the plan was pretty straight forward…make it PDI (Pre-Delivery-Inspection) fresh and upgrade the drivetrain. Then a mechanic at Ridge Hill Ford, Hopkraft knew a lot about Mustang 5.0 engines and thought that would be a perfect upgrade. “But only if I didn’t have to cut anything up to make it fit,” says Hopkraft. After a lot of research and measuring the swap was a go. Hopkraft upgraded everything to heavy duty status, including adding a correct 9” rear end (3.25 gear ratio) which made the swap easier. 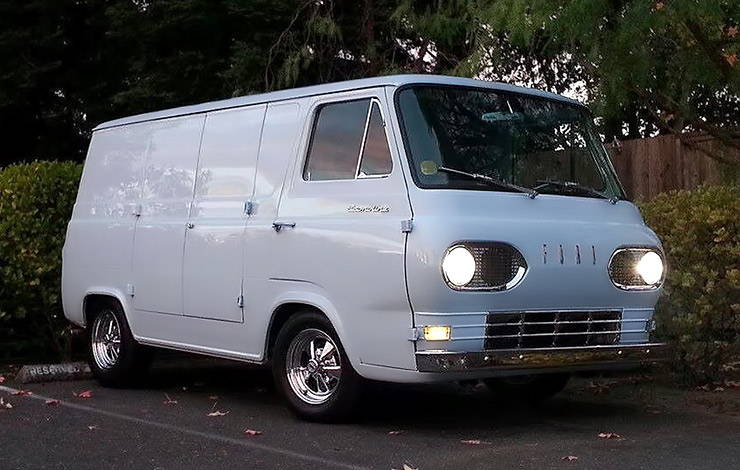 Ford never put a V8 in its First Generation (1961-67) Econolines but between 1965-1967 the “big” 240-ci 6 cylinder was available. The bell housing bolt pattern was the same as a SBF (302 or 351W) and Ford made a larger, taller doghouse to accommodate it. Two other challenges were conquered thanks to the late Eugene Phillips and his Blue Oval Engineering Company out of California. “He was a great guy who was really passionate about these vans,” says Hopkraft. “He made headers to fit the small block so no alteration to the doghouse cavity or floor were needed. He also made the crossmember to hang the 302 in the correct position and location using the existing frame rails.” In the end the Econoline’s original Toploader 3-speed and driveshaft are still in use with the 1990 5.0 Mustang upgrade. Hopkraft also used the ’90 Mustangs stock EEC-IV processor to control the fuel injection and spark but the stock gauges are all still functional.


With no rust to repair, Hopkraft spent a lot of time cleaning up the van’s well used cargo area. “It wasn’t really all that dented up just scratches and scars, more scuffed up and abused then anything.” 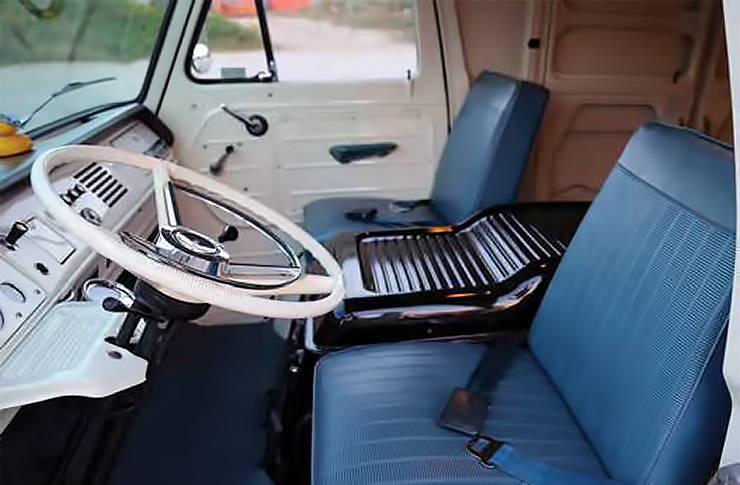 Hopkraft got the body as straight and ready to go as he could and passed it on to his then Ridge Hill Ford coworker Paul Molto for a fresh coat of single stage Wimbledon White enamel.

Everything else on the pickup was perfectly restored and personal touches added include a passenger seat, flipping the spring locations on the rear axle and front Ibeam to lower the stance, and adding a set of 17×8 Torq-Thurst II wheels with 215/50/R17 rubber upfront and 245/45/17R rubber outback.


His buddy Richard Ruiter took a $1,000 chunk of aluminum and turned it into a pair of the coolest billet surfboard racks ever made…all to carry a $17 swap meet purchased longboard. 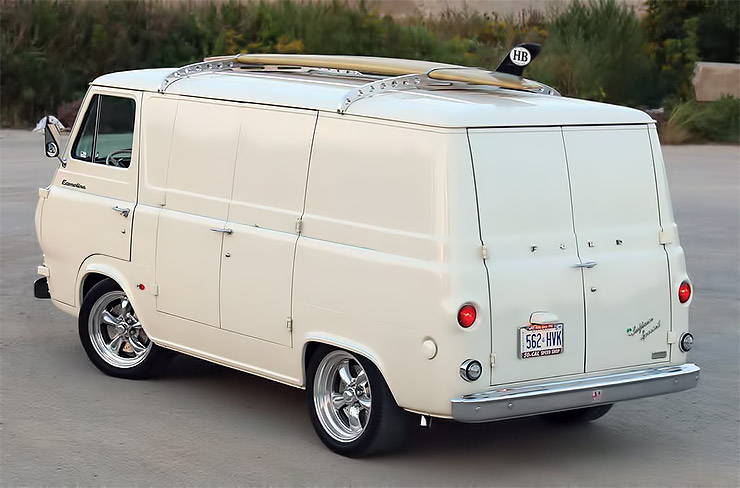 In stock form, the front and rear bumpers were painted white but Hopkraft chromed them as well as the grille. A chrome California Special emblem was added to the rear cargo door to further the surfer van theme.

Hopkraft’s always loved the utility of a van saying that it is the best way to travel to a show. “You’ve got wheels and a roof over your head,” he says. “As long as you’ve got your cooler and decent shower facilities you’re good for the weekend.” 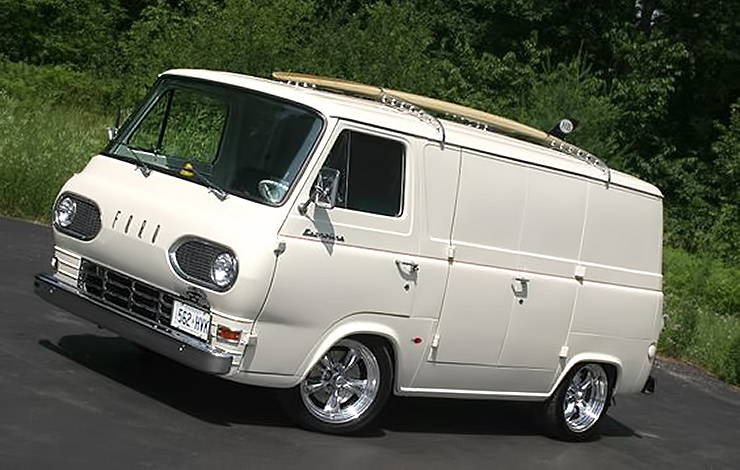 The 8-door Econoline was completed in 2000 — hard to believe when you see its condition today. It has 17,000 miles on it and would probably have more but Hopkraft also has a 1975 Chevy van he travels with and it has power steering and A/C. Despite the split loyalties, his rare 8-door Econoline is a keeper and Hopkraft plans to enjoy his California Special for many years to come. “It’s a fun, quick van to drive while getting good mileage, great sound, and lots of thumbs up.”
To that we say…Hang Ten!