Over 20 years ago Pat Gerk left this world and his family with a long tradition of time on the road.

He’d been a biker for years with tons of hours logged in the saddle. His nephew, Tommy Gerk, the owner at Tekni-Kolor, shared that love for running in the wind, which is probably why he inherited this ’66 Pan/Shovel from his departed uncle.
–
Things weren’t always like that, though. When Tommy and his brothers were growing up, his uncles were dedicated riders. The boys champed at the bit to hit the road on their own iron, but their dad wouldn’t allow it until they were grown up and out of the house. When you think about it, that’s a hell of a motivation not to live in your parents basement all of your life. 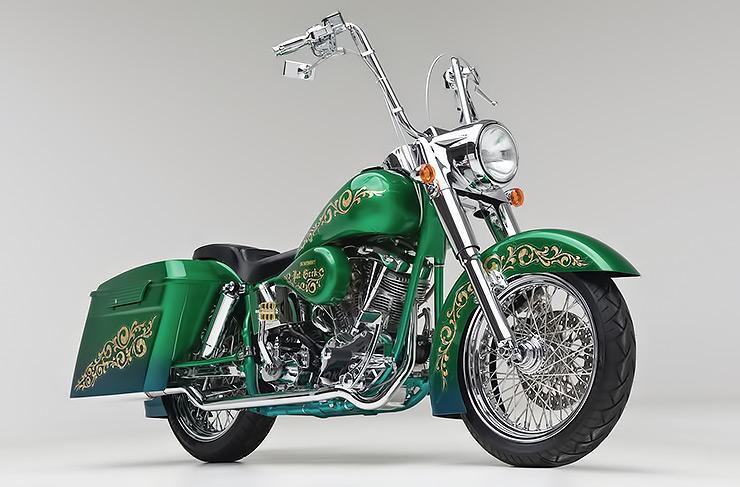 Time passed, the boys grew up, left home, and finally started street riding. Everything was good until Pat passed away leaving Tommy the legacy of the basket case ’66 in his garage. The old warhorse was in pretty bad shape. It sat in pieces waiting for the day Tommy would get it back to its former glory.

Tommy decided the greatest thanks he could give Pat would be making the bike a rolling tribute to his uncle. He recalled of his uncle, “He was an old-school guy who got into riding in the ’80s. It was a different time, before the credit-card bikers.”
– 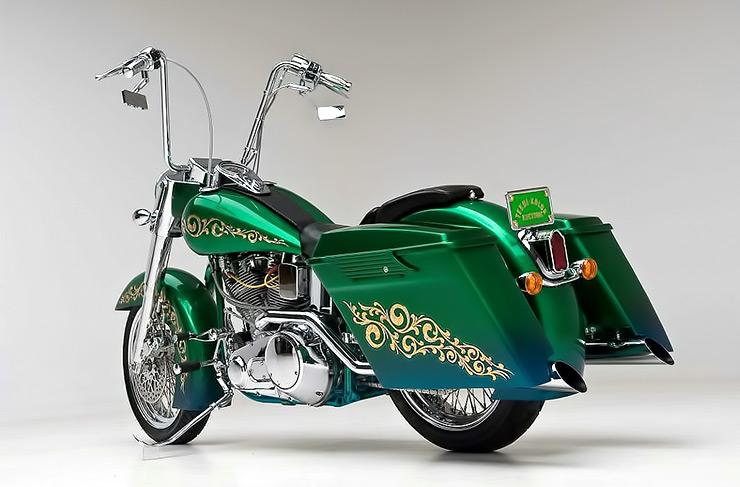 The Gerk brothers started by breaking the bike the rest of the way down so they could build it back up. Tommy says they wanted to redo the Pan/Shovel as an ’80s-style Harley in green, “Even though green is kind of a bad luck thing for bikes, but he was a bad luck kind of guy anyway.” Of course, the fact that Pat was born on Saint Patrick’s Day had more to do with the color choice than any sort of commentary on the green-as-bad-luck tradition, though.

Giving this machine the ’80s treatment also meant chrome, chrome, and more chrome, as chrome ponies were the flavor of choice back then. The candy green/teal Teknikolor Kustoms laid down on the metalwork really pops with all that shine, too. A guy who only goes by the name of Roary set off the green with just the right amount of gold and silver leaf on the tanks, fenders, and air cleaner. 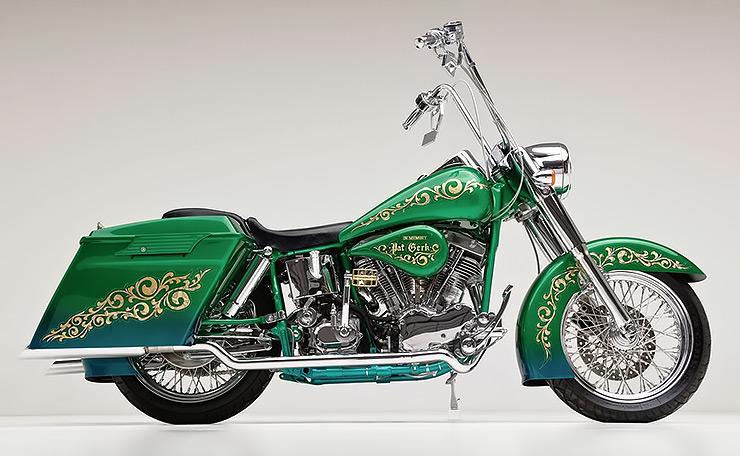 Reinventing Pat’s old steed was a long trip paid for with 10 years’ time, a lot of wheeling and dealing, and a healthy dose of outside help. Chicago Joe and Danny Ray were enlisted to clean up and rebuild the motor. You can credit Pat Durling for the sweet, smooth slash-cut exhaust system. He custom-made it just for this project. 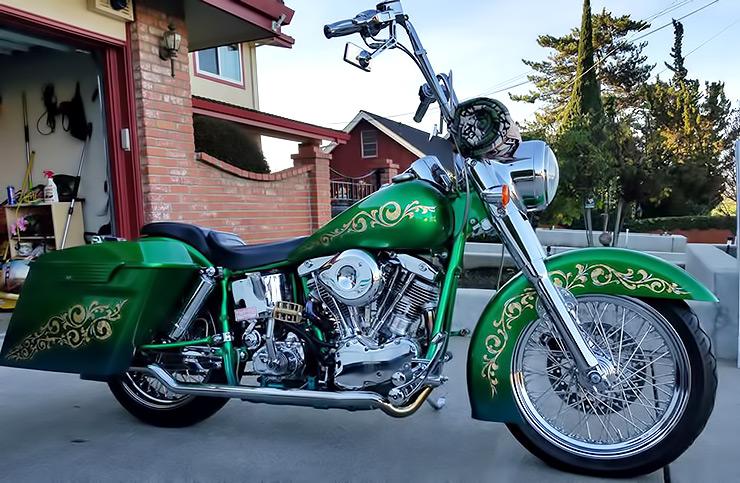 Restoration was the name of the game for a lot more of this project, too. Its frame, drive system, and transmission are all the original articles. The chassis got color-matched to the sheetmetal to really pull the whole look together. What didn’t stay stock was the bodywork and bars. You can’t have a true chrome pony without apes. Teknikolor Kustoms added in some sweet 18-inch hangers bracketed by Ness grips.


You can also credit Teknikolor for how smoothly the stretched gas tank melds with the front of the seat. Tommy’s fenders of choice were a set from Arlen Ness that are a lot cleaner than the stock units the bike was born with. The rear is bookended by Harley bags that Teknikolor stretched to align better with the slash-cut muffler ends. They topped it with a lower-profile two-up custom saddle that’s a great compromise between comfort and smooth lines. 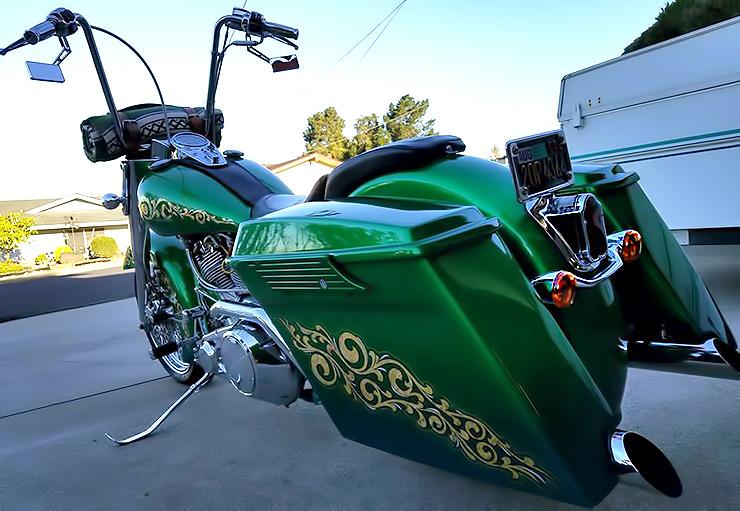 When it was all said and done, you’d think Tommy would have mounted up and rode off into the sunset, reminded of his dear uncle every time he went for a ride. The truth is a little better than that. Instead of keeping this awesome Pan/Shovel for himself, he shared it with the same man who, all those years ago, wouldn’t let him go riding in the first place. 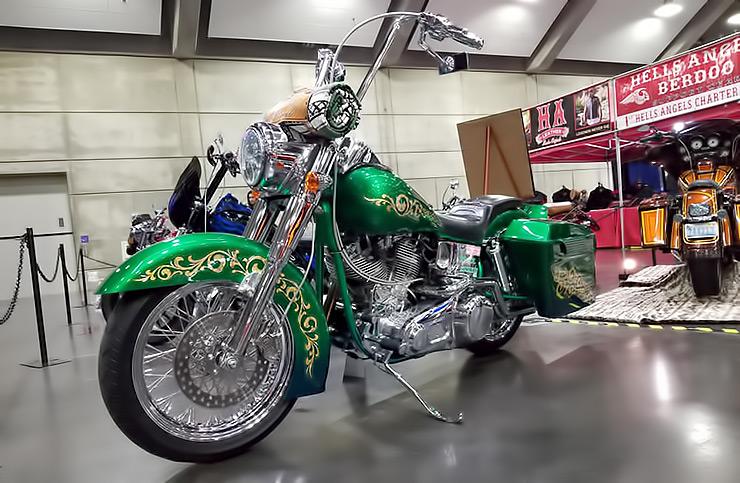 Not only does Pat’s old bike keep his memory alive, it’s become a way for his oldest brother (aka Tommy’s dad) to hang out with his boys. After the bike was rebuilt, Tommy and his brothers gave it to their dad so he could ride in the pack. If you’re going to spend an inheritance, there are few better ways than paying it forward to the man who brought you into the world and raised you. 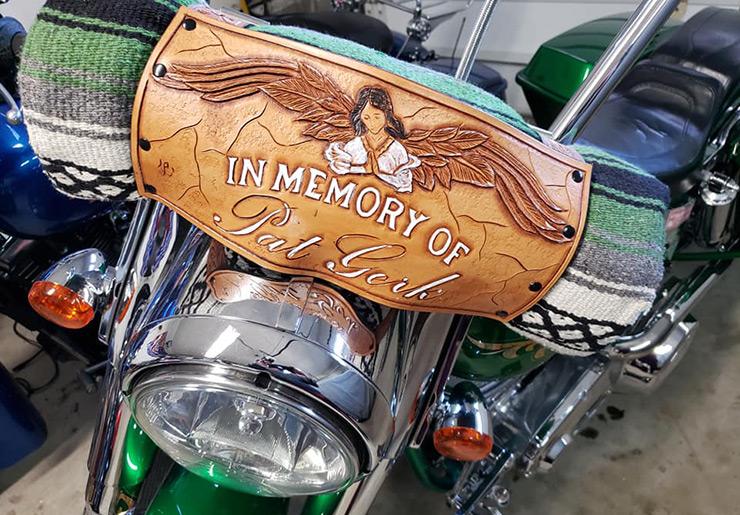