In the mid- to late-1970s, a man named Graham Stubbs took a factory right-handdrive 1965 4-door Chevelle, modified it extensively and launched the Street Machine scene. Chevrolet manufactured right-hand-drive vehicles in South Africa and this was one of a very small batch of cars that were brought into Australia. It is thought that there were between three and five Australian Chevelles in 1965 and this is the only one still alive today. The car was dubbed (and painted) with its name: Malibu Magic.
– The car was an enigma because at the time, the main showvehicles were hot rods and vans. Stubbs was one of the pioneers of the modified car scene. He helped form the Australian [National] Street Machine Association (ANSMA), establishing the judging rules for modified vehicles, supporting the registration requirements and also organizing insurance for clubs to enable them to put on events. He was a visionary and a huge support for the burgeoning scene.

Stubbs suffered from emphysema and was ill for many years. After the car won all it could, including being the Top Street Machine for four years in a row, Stubbs parked the car in 1993 in his back shed and she stayed there for 20 years.
In 2013, Stubbs passed on. Once the shock of Graham’s passing started to ease, talk amongst his friends and fans turned to the car itself. What condition was it in after sitting idle for so long? Could it be restored and if so, should it?
–
These questions were answered when Radio Revhead DJ and Stubbs fan John McCoy-Lancaster and his wife Donna contacted the family to pay their respects and to offer to bring the car back to life. After short time John triumphantly drove – yes, drove – Malibu Magic from his Sydney home to Canberra. And so it is that this car has now joined the McCoy-Lancaster family and proudly resides in their garage.
– The car has been modified from top to bottom. The paint is straight white tinter, the color being something that very few modified cars are painted in— but it works. To highlight the shape of the car, Stubbs had special striping painted with a burgundy and blue. The car now provides the true red, white and blue from the Chevrolet Heartland. There is a specially fabricated fiberglass and Lexan hood that was created so people could see the engine without keeping the front lid open and retaining the ability to look at those classic muscle lines.

The grille was originally a metal tube grille, later being changed to a dark blue metal horizontally lined grille that covers the lights and makes the front look fully custom. Below the front bar, the number plate folds down via a control next to the steering wheel inside the car to reveal two spotlights that can show the way. The back of the number plate is adorned with a sticker that is the catchcry of ANSMA: Together We Cruise, Divided We Lose. At the rear of the car is a specially designed light cluster with Malibu Magic lighting up at night. And the rear glass is etched with the outline of Australia on both sides with the Australian Street Machine Association logo. The wheels are Centerlines with 15 x 8 and covered with fresh 245 rubber all round from Mastercraft. When John was at SEMA in 2014, the guys at the Centerline booth couldn’t help admire how good the wheels look after all these years and miles the car has covered. 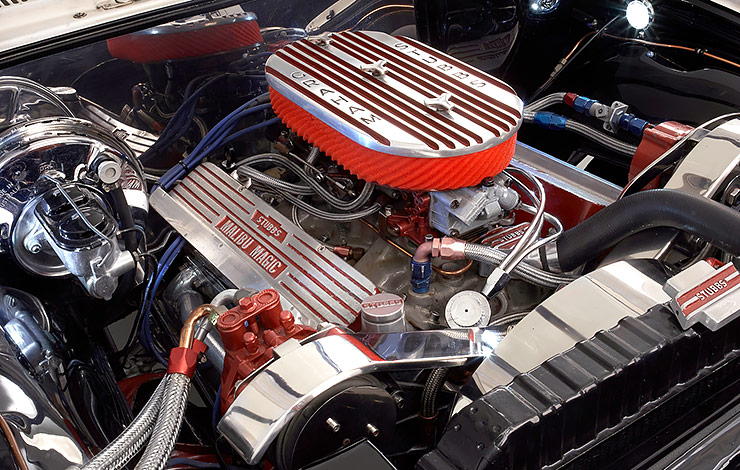 The original engine was a 283 that was taken out and replaced by a modified 327 that Stubbs built. Showcased under the Lexan hood is an 11:1 compression engine with a 1967 Corvette TriPower manifold and carbies. There is a Holley 350 in the center surrounded by two 500s. The car also runs a Turbo 400 Gearbox and a custom rear end built like a hot-rodder would. In 2014, the engine was dropped out and a complete refresh of the internals and all the gaskets was completed so as to stop any nasty oil leaks.

READ THE REST OF THE STORY ON THE NEXT PAGE