Most often we see dash cam footage of people doing the craziest things in traffic, but this time we have an extraordinary video! This lady’s dash cam actually captured two idiot who attempted to rip her off her insurance by staging a traffic accident! This is just hilarious.

Two guys stand on the side of the street and when the lady drives near them, one of the guys pushes his bike in front of the car, then immediately runs backwards towards the car and jumps on the hood! We are laughing already, because this stage was as terrible as they can get!
However, neither of the men were prepared for the driver of the car to get out and reveal that the camera on her dashboard had been recording their pathetic attempts to get a payout from the start. 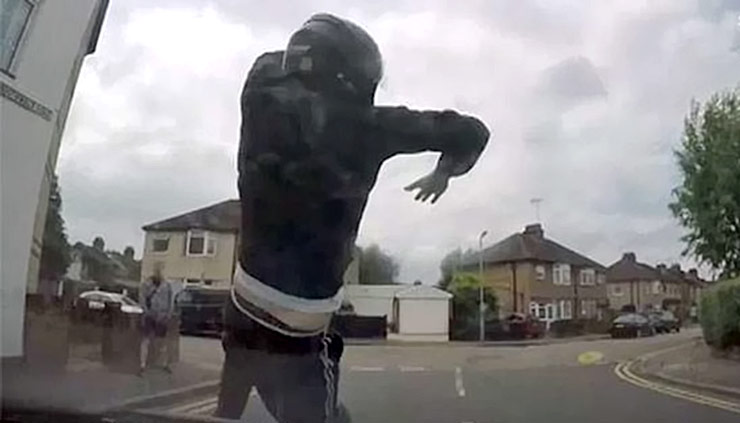 The lady, visibly and audibly distraught, got out of the car, phone in hand to call the police, when the other dude, obviously the first one’s accomplice, comes over telling the lady that he recorded everything on his telephone. The moment she hears their attempt at a scam, she scream “You’re mad, you’re absolutely mad. I’ve got a camera. Do you understand you’re on video, you complete idiot?” This was just plain gold!

The moment they heard the word “camera”, the two amateur scammers grabbed their stuff and get away from the scene as quickly as they can as the woman rings police.

The reveal is a shock to the two men, who immediately try to cover their faces and get away from the scene as quickly as they can as the woman rings police.

According to reports, the scam the motorist tried to pull off is already widely prevalent around the world. This is one of the reasons why you should own a dash cam.