The tale of the 1954 Oldsmobile F-88 in the automotive world has been compared to a murder mystery.

Indeed, Oldsmobile’s sports car-in-the-making was brought to an untimely demise by someone near and dear to the division—Chevrolet. The F-88, destined to shine in the showroom, posed a threat to Chevy’s runaway hit, the Corvette. So Chevy killed the F-88 and it ended up a concept car in the 1954 General Motors Motorama show circuit—admired and adored by many, driven by few. 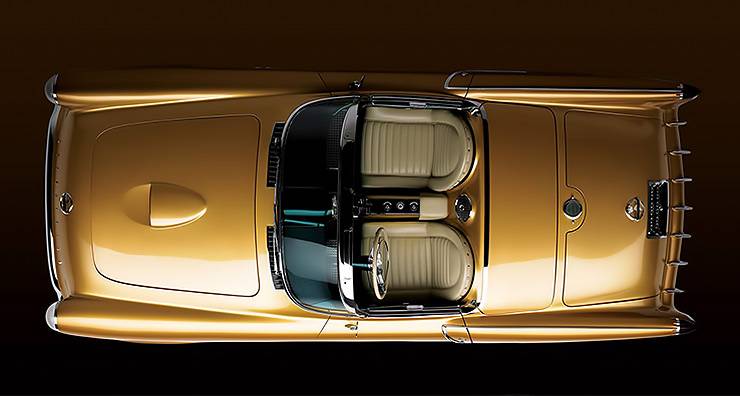 Here’s where the mystery comes in:  after retiring from the Motorama, legend has it that the F-88 was dismantled and credited and shuttled between various owners. No one knows when the car was put back together and enhanced to become the collector’s item that broke records as the highest selling car ever at a Barrett-Jackson auction. And were there one, two, or three original Oldsmobile F-88s?

Car historians disagree on this one, too.  Others say that the real mystery is why Oldsmobile never resurrected its slain star. After all, few Oldsmobiles were as widely worshiped, posthumously, as the 1954 Oldsmobile F-88. The F-88 was one of Harvey Earl’s pet projects. (In fact, part of the F-88 murder mystery tale is the story that the head of GM styling had a duplicate red F-88 made that he drove to his son’s races. But some auto historians dispute this.) Oldsmobile wanted its own sports car so they organized an unparalleled team of designers to mastermind the F-88. The car began in the hands of Bill Lange and ended with designer Art Ross with Jack Humbert in charge of the interior and Harvey Earl overseeing the whole process, tweaking the design as it developed.
–

But instead of hitting showrooms, the F-88 made its debut—and only official public appearances—at the General Motors Motorama show, which kicked off at the Waldorf-Astoria Hotel in New York City on January 21, 1954. The show boasted six full days of General Motors’ best vehicles alongside its “dream cars” like the 1954 Oldsmobile F-88 and even featured a full scale musical revue.

Onstage next to the Oldsmobile Cutlass fastback coupe, the F-88 was a sight to behold—the Cutlass couldn’t cut it in comparison, it was definitively upstaged Painted metallic gold, the F-88—a golden goddess—seemed to glisten under the show lights, with a hint of metallic green sparkling on the inside of its fender wells. 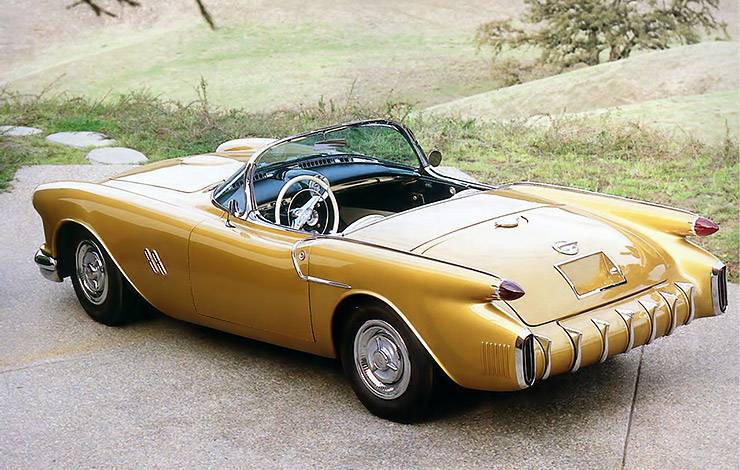 Sitting proudly atop a Corvette chassis—with the Chevrolet’s 102 inch wheelbase—the F-88 nodded to its Chevy assassin with its fiberglass body while managing to remain distinctively Oldsmobile with its bullet taillights and elliptical grille. Under the hood, the F-88 was powered by a 324 cubic inch Rocket V-8—straight from the 1954 Oldsmobile Super 88. With modifications, the 185 horsepower could be cranked to 250 (advertised power was 249 hp. – though the car didn’t have too many opportunities to show that off.) The F-88 used a 4-speed Hydra-Matic transmission. 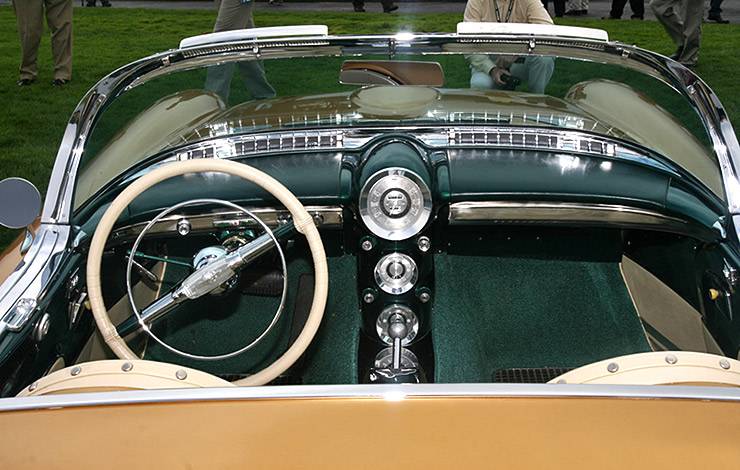 Over 2 million people gaped and gawked at the show-stealing F-88, proving with overwhelming popular reaction how successful the car would have been in sales. But, when Motorama concluded, the F-88 was turned over to the sponsor division with the rest of the dream cars.


And, while historians disagree about whether Harvey Earl really had his own red Oldsmobile made in 1954, everyone agrees that Earl was especially fond of the F-88. While many other concept cars were scrapped post-Motorama, Earl saved the F-88, crated it, and shipped it—but, to whom? Most people think it was E.L. Cord, the big wig behind Auburn-Cord-Duesenberg but no one knows for sure. 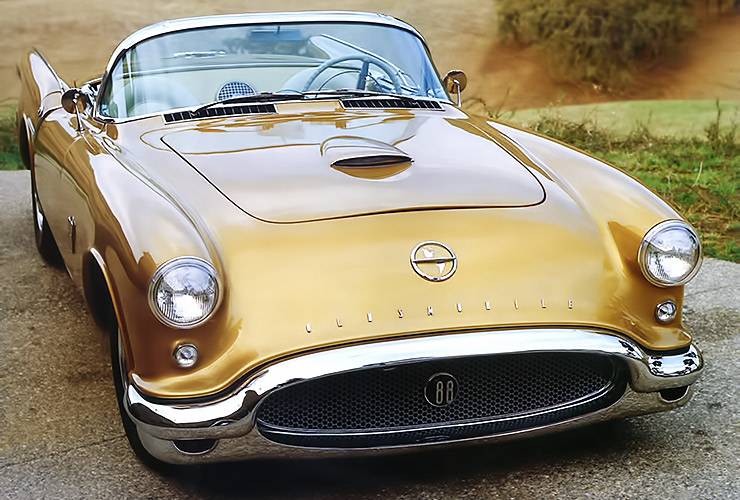 Whoever first purchased (or was gifted?) the 1954 Oldsmobile F-88 certainly didn’t know the jewel they kept crated—for years after he 1954 Motorama circuit, he F-88 remained in pieces while passed from owner to owner. It’s a fact that must make the car’s current owner, John S. Hendricks, shudder. The Discovery Communications owner paid a whopping $3,240,000.00 for the car in 2005—the highest a collector car had ever been sold at a Barrett-Jackson auction. But before it reached Hendricks, legend has it that the car disappeared mysteriously from GM styling, was disassembled, and sent to business baron E.L. Cord, who then sold it—still crated—to Bil Barker, who passed it on to Jim Brucker. The F-88′s blueprints and original paperwork suggest that, after Brucker, the crated car lived with Leo Gephart before ending up with Ed Lucas as a chassis with the body set on top and the rest of the car still in crates. But when Lon Krueger bought it a few years later, he says it was completed but still needed to be restored, which he did—7 years later. Today, after John S. Hendricks’ history-making $3 million dollar auction win at Barrett-Jackson, the F-88 is on display at the Gateway Colorado Automobile Museum.


Still, the Oldsmobile mystery continues. The F-88′s 12th owner, Gordon Apker, says that he has heard many a story about the car. Some say the original F-88 burned while the handler was loading it onto a trailer and others says that the car caught fire in Harold N. Metzel’s driveway—Oldsmobile’s chief engineer.  He denies this. The other story—the one you heard here—is that the car was crated and sent to a millionaire. E.L. Cord, perhaps? 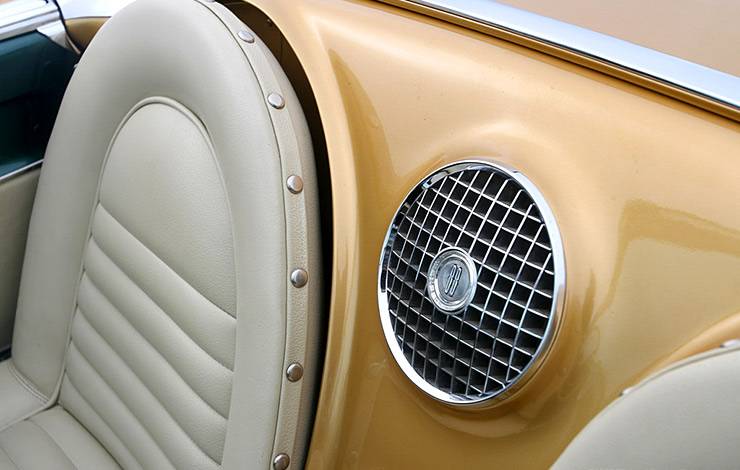 The stories surrounding the 1954 Oldsmobile F-88 make the car a part of automobile folklore. This golden goddess wasn’t just a “dream car,” she is a living legend. And, as for Oldsmobile—it learned its lesson.  General Motors no longer scraps its “dream cars.” They stick around, hanging out in warehouses, and showing up at special occasions. It looks like, for now, the F-88 is the only automotive murder mystery that has yet to be fully solved.