The jury from Oregon finds police captain Rob Edwards liable for $181,170 in damages for delivering a karate kick and using his vehicle to ram a motorcyclist during a traffic stop.

Edwards has been an Oregon State Trooper for 22 years.


The incident happened on August 3, 2012, when Justin Wilkens was driving his Aprilia motorcycle and passed Rob Edwards who was in the unmarked cop Camaro.
Captain Edwards turned on the emergency lights, but not the siren and they started a three-minute chase.
Wilkens says he never saw those lights. He also said that when you’re driving a motorcycle you can’t turn around 100 percent behind you because you have to keep your eyes on the road.
Wilkens added that had never seen a black Camaro cop car before. He also said that the Camaro was pretty indistinguishable from a civilian car, even the license plates look standard. 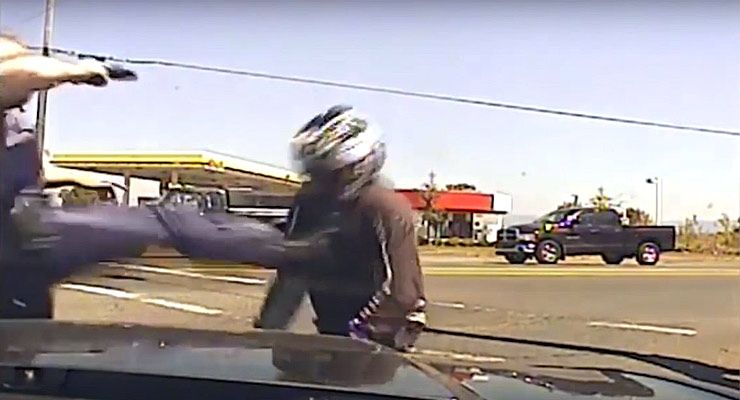 Wilkens stopped on a narrow shoulder and placed his feet on the ground. Then, captain Edwards rammed the 2006 Aprilia sportbike, knocked Wilkens over and caused damage to the front end of the Camaro.
Wilkens stood up quickly, with his arms extended. Captain Edwards got off from his vehicle and pointed his gun at Wilkens. It took Wilkens a few seconds to get on the ground. As he started moving down, the trooper gave him a karate kick to the chest and left Wilkens with a broken collarbone and two fractured ribs.

The district attorney’s office never filed charges against Wilkens, but the motorcyclist decided to sue for damages after his medical bills and other expenses topped $31,000.

The jurors found Captain Edwards “negligent” for striking the sportbike. They also declared that the kick to the chest was an excessive and unconstitutional use of force.

Wilkens got more than $31,000 in economic damages to reimburse his medical expenses and motorcycle repair bills, $100,000 in non­economic damages for his injuries, pain and suffering and $50,000 in punitive damages.