A security camera captured the hair raising moments a motorcyclist narrowly avoided being crushed by an overturning truck.
This is one of those instances when someone cheats death but doesn’t even realize it!

In east China’s Fujian Province a sedan car ignores a stipulation for a left turn into the main road. Its move forces the heavy-duty truck to swerve the wheel and brake hard to avoid ramming into the car head-on.


The truck spun into chaos as it braked and load of sand was spilled cascaded onto the road.
A motorcycle driver right in front escaped the ordeal unscathed. 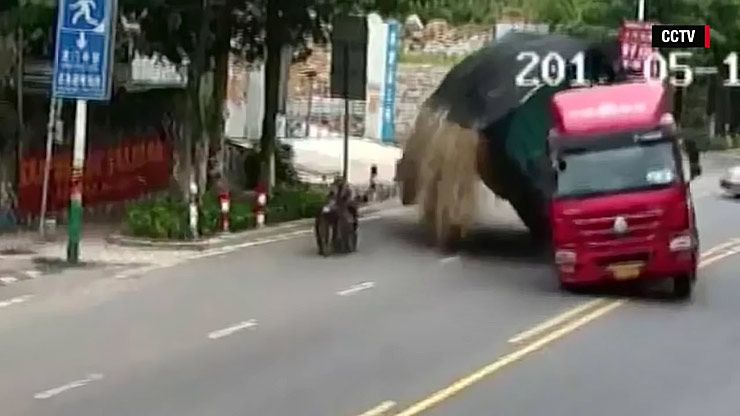 A roadside witness is more scared than the motorcyclist probably.

“I first thought it was car collision. I saw that motorcyclist was almost hit by the overturning truck,” says the witness surnamed Bai.
“The motorcyclist stopped his motorbike and looked back. He said while patting his chest that it was a close call and it has got the shit scared out of him,” he said.

Ten seconds are usually short passes of time; but they can also be long enough to spell the difference of life and death.

A nearby CCTV captured the entirely of the accident.