Many car enthusiasts were influenced by automobiles at a very young age, often at an unconscious level… but something left an impression that led to a future obsession.

Lucas Lambert has his Grandfather’s car dealership and car collection to blame…or thank for his “need” of automobiles.
Lucas recalls of all the cars that came and went, there was always a long and sleek Lincoln on hand that his Grandfather would taking him cruising in to the gut of their town.


Flash forward a couple of decades and Lucas finds himself keeping a watchful eye out for a Lincoln of his own. One day Lucas gets a call from a buddy that there is a Continental on E-Bay that sounded good…and he was correct. The Lincoln was the right year, the price was good, and before he knew it Lucas was clicking on the infamous “buy it now” button.
– 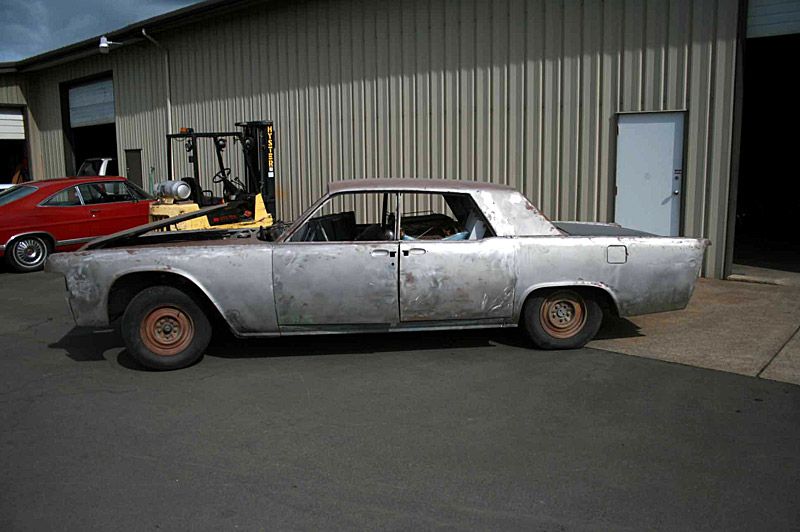 When the shipping company delivered Lucas his new 65 Lincoln Continental…it looked good, but after further investigation into the heavy rust that was hiding under the carpet, and Lucas knew he had a battle ahead of him.

This is an all too familiar story…the car you just purchased isn’t exactly what you had in mind…do you fix it, flip it…crush it? 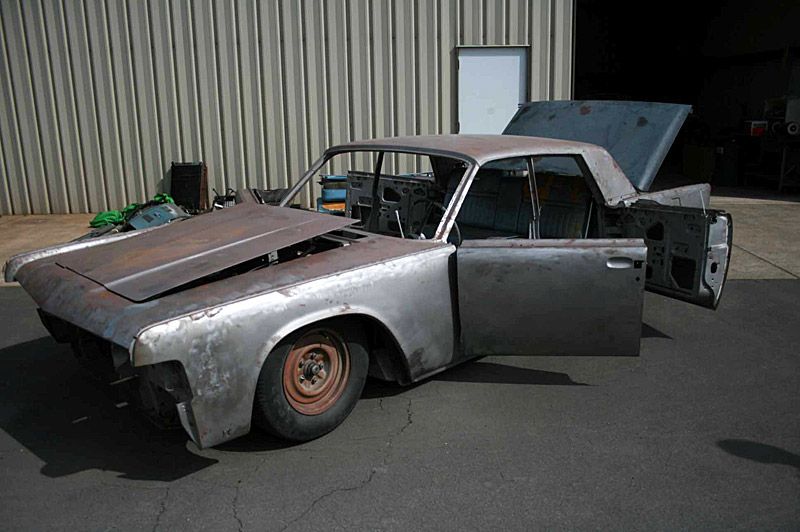 Lucas was determined to turn his purchase into the vision he had in his head of what it could be, and that vision was shared by Jon Mannila of MetalWorks Classic Auto Restoration in Eugene, Oregon.
Perhaps by fate, but when Lucas and Jon joined together, the Lincoln’s future became very bright.
The 65 was sent to MetalWorks and the crew got busy. One of the major battles on the 65 was the fitting the replacement engine. The factory 430 was discarded and replaced with a massive 460 Ford that was punched out to 532 cubic inches.


The new engine/transmission combo paired with the desire for the Lincoln to “lay in the weeds” resulting in heavy body modifications including: A flattened front cross member, custom built inner fenders, a custom firewall, custom raised transmission tunnel, and a full replacement of the trunk floor and rear wheel tubs. 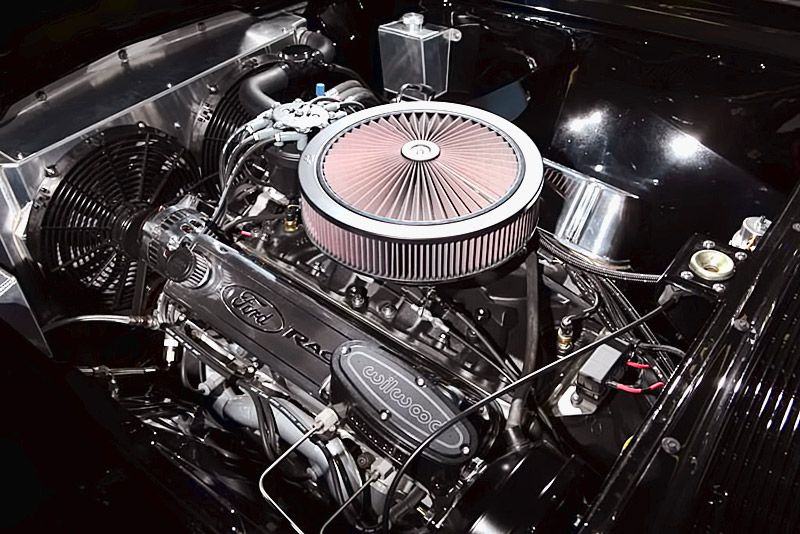 Once all the heavy body mods were finished to fit the driveline, another battle began to get the 65’s air ride to perform properly as this had been started by another party prior to Lucas taking ownership. 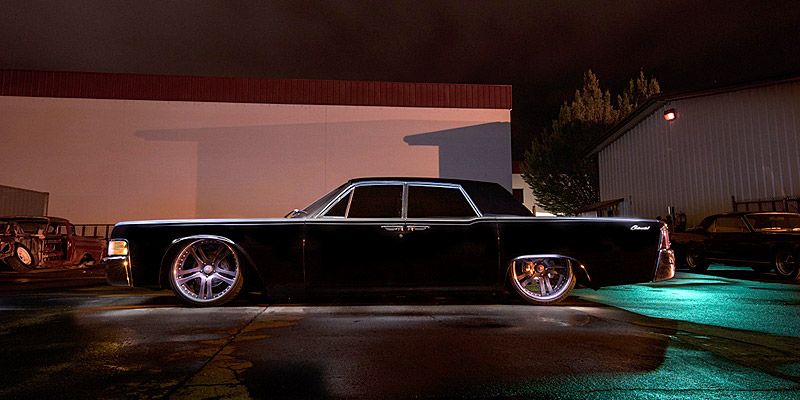 After this 2nd major hurtle was overcome, the Lincoln finally left the fabrication bay, and headed into the body shop where its long lines were massaged to perfection then shot in coats of miles deep black Glasurit paint. After being cut and buffed to a mirrored finish the 65 headed to assembly. 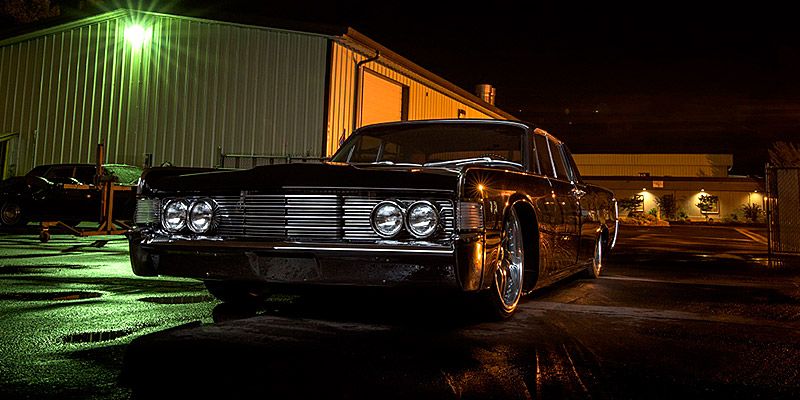 What seems like several ton of bright work were hung back on the painted body after being straightened, plated, and polished. Last but not least, the Continental received a full custom interior in pure black along with enough car audio to sink a battle ship. 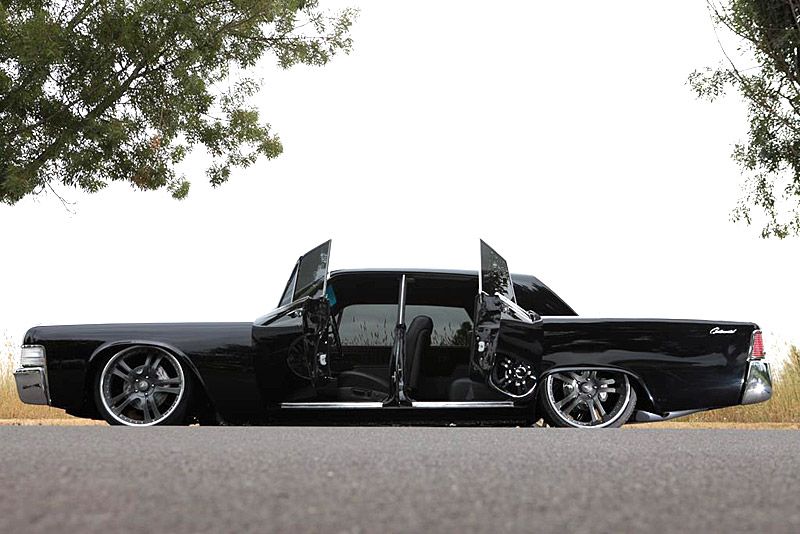 It took Lucas’s determination and the skilled team at MetalWorks to see the Lincoln through, but the end result is nothing shy of stunning.  Painting any car black is a real commitment, but to paint a car as long as a 65 Continental in black and acquiring laser straight body lines is nothing shy of amazing. 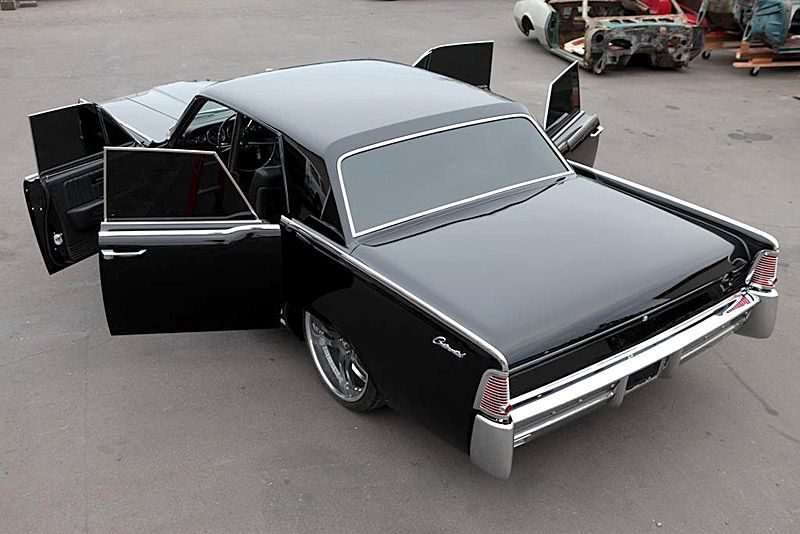 Lucas has one incredible ride on his hands, and one he can’t wait to put the miles on just like he did riding shotgun with his Grandfather.

You may know the Lincoln Continental as the