This Super Awesome Micro Project (SAMP) is a master peace of two brainiacs living on different sides of the world.
Their invention started with only one message, posted on Twitter, asking for a contribution by investing in this awesome project.  And Lego fanatics have quickly responded.

It all started when Steve Sammartino, from Melbourne, met over the internet 20-year-old genius from Romania, Raul Oaida. Almost two years after Sammartino’s tweet, and with a help of 40 donators, the car was finished, with half a million Lego components and a compressed air-powered engine. 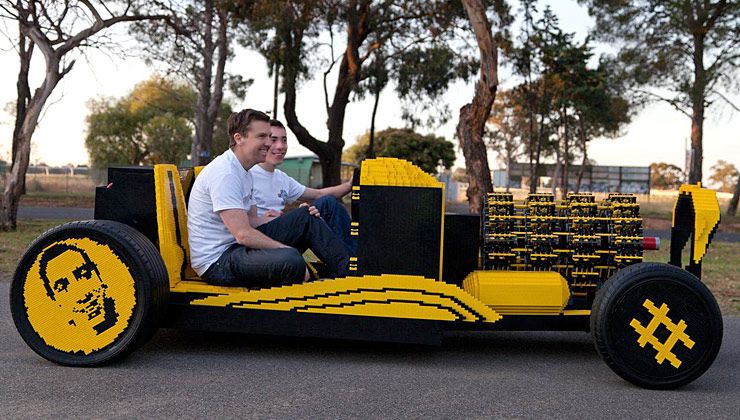 It was built in Romania, and over the shipping in Melbourne, the car has gotten significant damage, which was not easy to hold the pieces back together. The problem occurred as a result of changing in temperature while crossing the Equator so the pieces were freezing and heating up, thus making them warped.

The most remarkable part of this Lego project is the engine. There are four orbital engines, each equipped with 64 cylinders and 256 Lego pistons. The pistons are driven by a cylindrical container of compressed air. Even though it can currently reach up to 20 mph, Steve and Raul do not dare to drive it to the limited speed, in order to avoid any accidents and to experience so-called ‘giant Lego explosion’.

Everything in the car is made fully from the tiny Lego bricks. Nevertheless, there are some basic parts, such as wheels, tires, and gauges that are excluded.

This Awesome Micro Project proves once again that a huge mass of Legos can design fascinating creations.