This 1960 Metropolitan, produced by American Motors Corporation (AMC) through Austin from 1954 to 1962 is quite an improvement on the original. 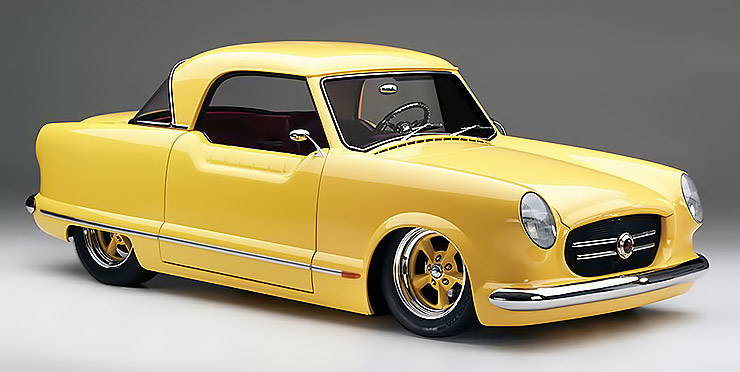 Credit for that goes to Steve Irby, the founder and owner of Kicker, a car stereo company, who has a penchant for small cars. During high school, he restored a Morris Minor Convertible (a quirky English car with a huge cult following in Europe) and painted it yellow.

At the time Irby purchased the Metro from a local professor, his original plan was to just add air conditioning because the summers in Kicker’s hometown of Stillwater, OK, get really hot. Then Irby was told the stock motor lacked sufficient power to run an A/C compressor. With a potential motor swap in the cards, the die was cast. From there, the project snowballed to the car you see here.
– 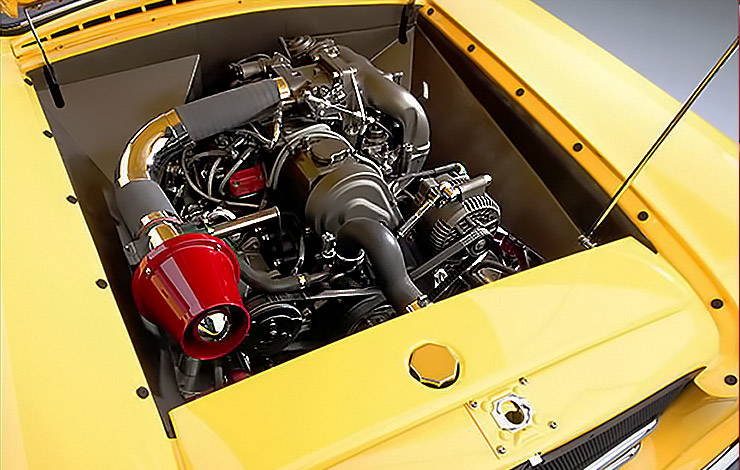 According to Toby Lewis, Kicker’s Installation Department manager, the car “did not run, had flat tires, broken windows and a lot at rust.” Irby, wanting only the best, snipped it off to Poses, one of the premiere hot rod builders on the East Coast. Posies took control of the design and added elements like the new front and with the rounded wheel openings, Mercedes headlights and custom grille…

With the exception of the finishing of the trunk, the Metro was complete when Lewis and his team at Kicker, John W. Myers and Randy Botts, got it back three years later. The install team’s goal was to create an extraordinary Kicker system (think lots of gear) that would appear to belong in the vehicle. 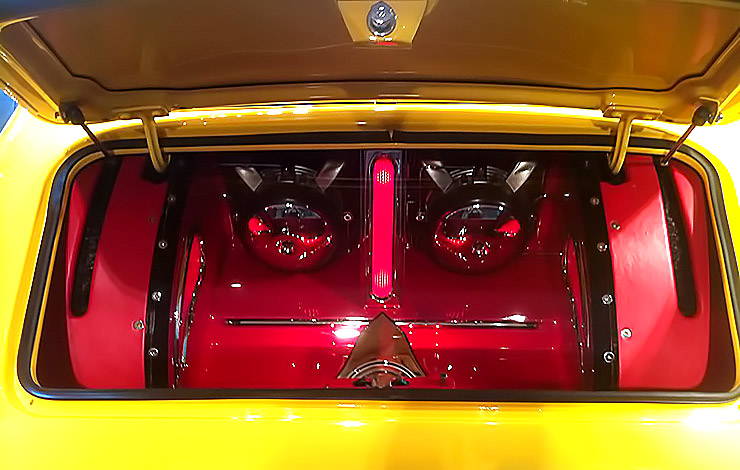 From the photos, it’s clear that the level of integration is stunning. The new dash and console gave the team a few unique opportunities. “We looked at the space behind the seat, trunk and on the doors to see which of our new equipment would fit and look correct with the car,” Lewis explains. We also wanted to make sure that the sound quality was just as important as the cosmetics and installation quality.”

Given the Metro’s tiny cockpit, the installers encountered many hurdles, making the installation a challenge overall. Hiding wires was a concern because the Metro lacked large cavities for the wire to be run through. In addition, due to the way the doors were constructed, they lacked the depth needed to install speakers into them. To solve this problem, the Installers fit sealed aluminum and fiberglass enclosures through the door panels and attached them to the door’s existing metal. The sealed speaker enclosures for a set of Kicker SS65.2 components increases the front stage’s sound quality. 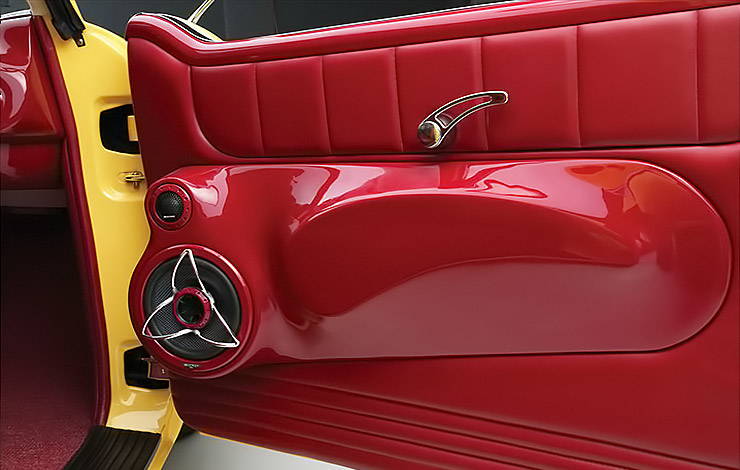 In order to achieve maximum airspace with the coolest design, the installers had to assemble the sub enclosure for the Kicker L7 10″ 4-ohm dual voice coil subs in the trunk. All the cosmetics in this install relate to each other. The panel at the bottom of the sub enclosure has elements of the amprack shape, wheel stands and the amplifiers’ badge work. The 10-gauge wires leading to the amplifier were passed through copper tubing that was custom bent and then chromed. Lewis states, “It took all three of us to get the woofers mounted because of the complexity.”


The amprack also was assembled in the car in order to hide the wires and mounting bolts. The installers investigated putting the subs behind the seat and amps in the trunk, but decided to mount the amps behind the seat since the battery is located there. 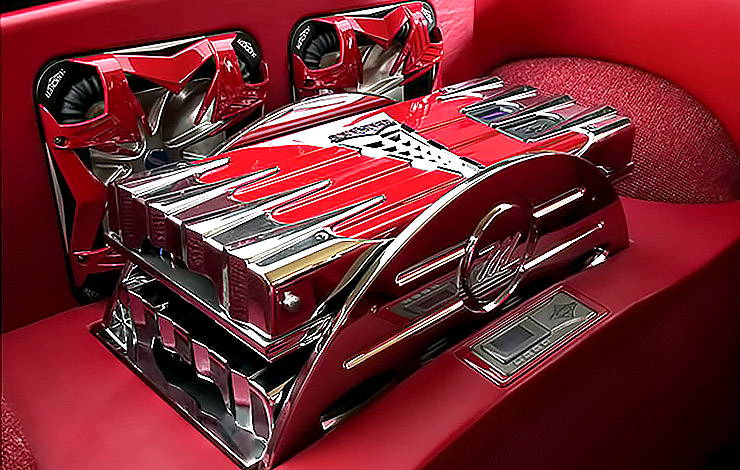 This simplified routing the wires. They went with the SX600.2 for both the woofers and the front stage, which gave them 175 watts for each of the front speakers. With the sub amp bridged at 4 ohms, it produces about 750 watts between the two 10″ L7 subwoofers. The rack’s front and back match the custom wheel stands, which are made of aluminum and machined with the Metro logo and other cosmetic designs. The color of the amplifier’s display was also changed from blue to red to match the interior’s color.

Keeping the car cosmetically cohesive was of prime importance for this install.


The teardrop shape in the door handles was carried into the front speaker enclosures for the added airspace and to keep the look matching. This teardrop was also added to the sides of the subwoofer enclosure to continue the motif into the trunk. 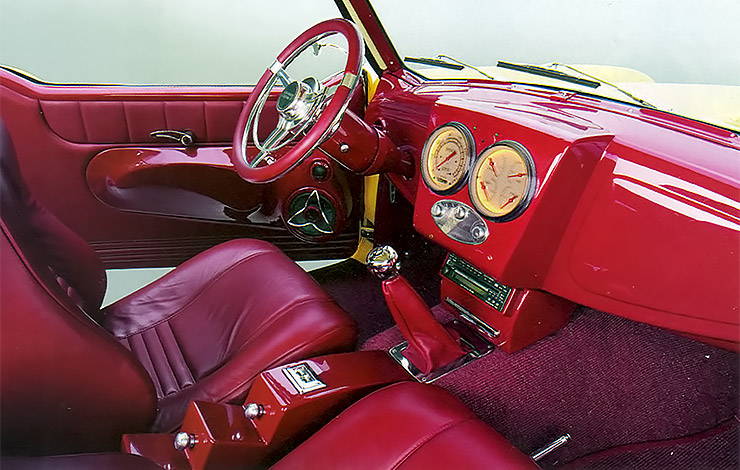 “We’re really proud of the cosmetic integration of the door handles, door panels, sub enclosure, amp rack, wheel stands, console and the general cool looks and great sound” Lewis boasts. The chrome-plated aluminum panels in the trunk were all handmade with a router, with the only machining done for the engraving.

The car’s underside shows off how much work really went into construction, which took an estimated 500 hours.

If we have to quibble about anything, it’s the selection of the Ford Ranger engine. However, with its lowered stance, courtesy of the AirRide Technologies suspension, the classic Colorado Customs wheels and BF Goodrich rubber, the little Metro strikes a stunning pose, static or out on the road. Over the years Kicker has built and sponsored many noteworthy show vehicles. While not quite as far over-the-top as others, all are flawlessly designed with installations that are executed to the Nth degree.

The guys in Stillwater truly get it. 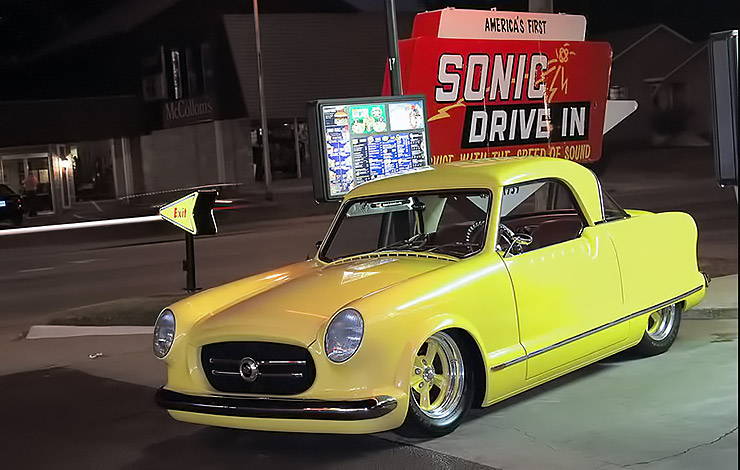