Australian answer to Evel Knievel, daredevil Robbie Maddison has achieved the incredible feat of riding huge waves in Tahiti – on a dirt bike.

Famous for stunts like jumping his bike over a football field and backflipping over the opened Tower Bridge in London, riding his bike across waves was his most ambitious stunt yet and took two years of preparation.
–
He said he has surfed in Australia since he was eight-years-old and had the idea for the stunt while watching his wife ride a wakeboard.
“Something clicked in my head. I fantasised putting skis on a bike and riding on water,” he said. “It was a stupid vision at the time, but I kept toying with it, playing with designs and concepts, and eventually it became a reality. It’s not about being the first or being right, it’s about believing in yourself because you know something is possible.” 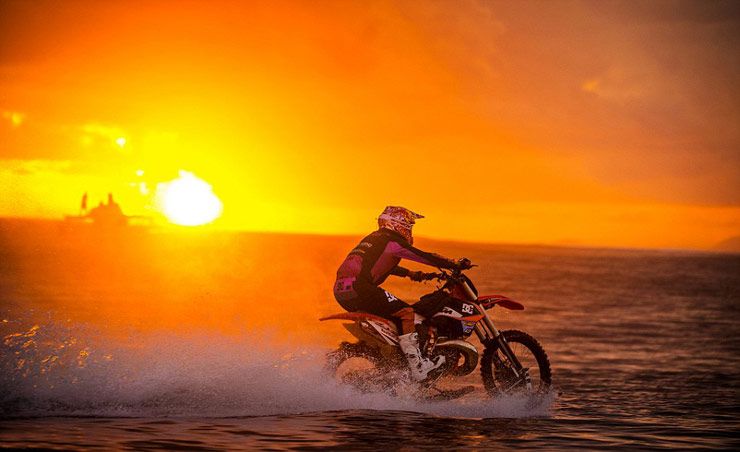 He spent two years modifying his motorbike and attaching skis to the front wheel and a propeller tyre on the back. The motorbike, as it turned out, was a modified KTM250 SX. It had been fitted with skis that had little fins at the bottom to act as rudders and a paddle steamer-like back tyre. Maddison had chosen the simple two-stroke KTM250 because it was less likely to have mechanical issues in the water as opposed to a four-stroker.
– 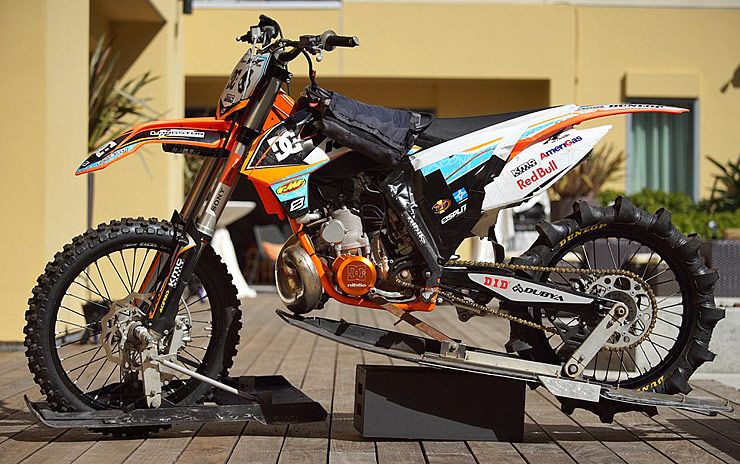 Maddison’s stunt was performed at Teahupoo in Tahiti, known for its powerful surf breaks. Injuries aren’t just common at Teahupoo, they’re likely. To be on a motorbike out there was certainly tweaking limits.

At one point, Maddison was hit by a wave at Teahupoo straight out of the west. These are the waves the best surfers chase.
Maddison says the wave nearly killed him. 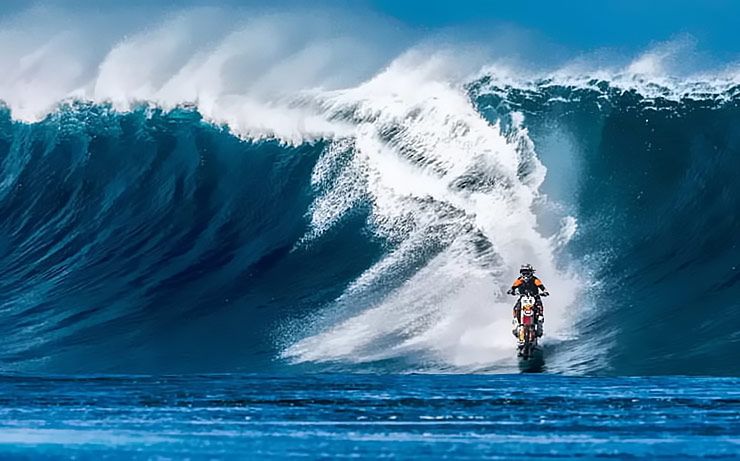 “There I was on a motorcycle, with the worst thing that could possibly happen,” Maddison said. “I’ve never felt like I was in the wrong place at the wrong time more than I did right there. It was a near-death experience.”

“My friends and crew were completely rattled, having thought that I had drowned in the wave. It’s the gnarliest thing I have ever been through.”

You can watch Maddison take on Teahupoo in the video below.