What do you do when you’ve already built two feature trucks, a cover truck, a full custom Merc and are a member of one of the baddest truck clubs on the planet? If you’re Mark Zarate, you build a full-custom SEMA truck, but we’ll get to that in a bit.

Like many of us, Mark is fueled by people telling him “you can’t”: you can’t put an LS engine in a Tacoma, you can’t build a full SEMA truck in your garage, and of course, all of these you can’ts only fueled the fire and led to something bigger and better than Mark ever thought possible. 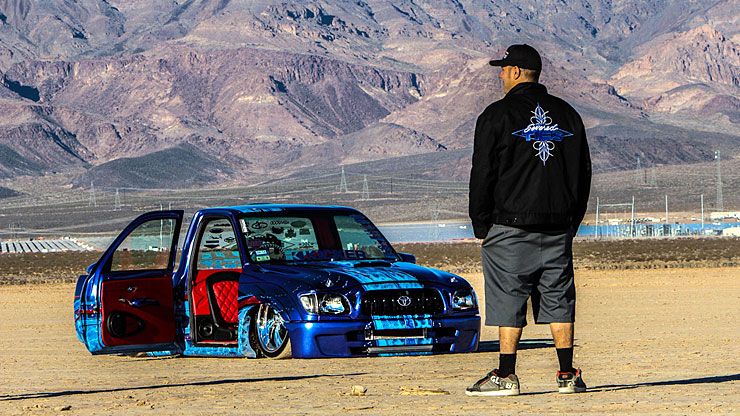 Mark and Crystal Zarate are no strangers to the custom truck world and hard work, as mentioned, Mark already has quite a few memorable builds notches on his belt. One thing he takes a ton of pride in is the fact that almost every inch of each build is performed in his home garage with his own two hands, and the occasional helping hand from club buddies and close friends.
The hard work poured into each of these builds is undeniable, and the dedication that it takes to undertake a full-custom build from scratch is something that we all deeply admire. Sit back and enjoy as we take you through this whirlwind SEMA build now known as Taco Supreme. 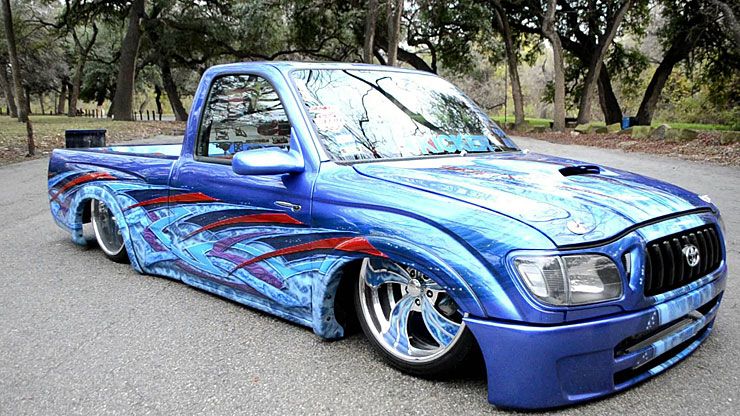 Could you build a full-custom truck in your garage? Possibly, but could you build a full-custom right-hand-drive Tacoma sitting flat over 20-inch Intros with an LS stuffed under the hood, all in a matter of 10 months?
Well, that’s the miracle that is Taco Supreme. Mark had always dreamed of building a SEMA truck, and when 2014 rolled around he decided that it would be the year that he would finally make this dream a reality! He’s always wanted to build a Tacoma, and his buddy Adam Cox had one for sale, so the pieces of the puzzle fell into place, and before he knew it, he had a shell sitting in his garage and he started planning his first full SEMA build. 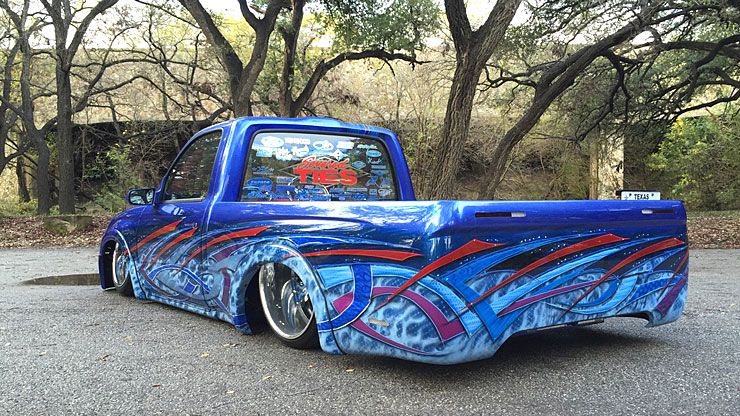 The goal was to take subtle styling cues from all of his past builds, trucks, hot rods and lowriders, and put some these different styles and mods together in one glorious build. Since the timeline was dead set and he only had 10 months to complete the build, there would be many, many, many late nights ahead.


Right away Mark gutted the Taco and built a frame for it using a 1993 Toyota front clip, and of course, the truck was set flat on the floor via a full air suspension setup. The body drop and frame were centered on tucking a set of 20-inch Intro Twisted Vistas, but the truck would be sporting 2012-inch deep-dish rear wheels. To accomplish this, Mark shortened a Ford 9-inch rear and rebuilt the Tacoma bed to accommodate the wide wheel. Why, you might ask? Because Texas.

Read More and Watch Video on the NEXT PAGE