Kevin Stone’s ’57 Chevy Bel Air was barely a shell when customer Tom Blaney walked in his Stone’s Speed Shop in Chilliwack, BC and offered him big bucks if he could guarantee it would be completed in about a month.

Despite the fact the car was his own personal project that he’d been dreaming of building for years, Stone accepted the challenge. The result is this stunning car.
– 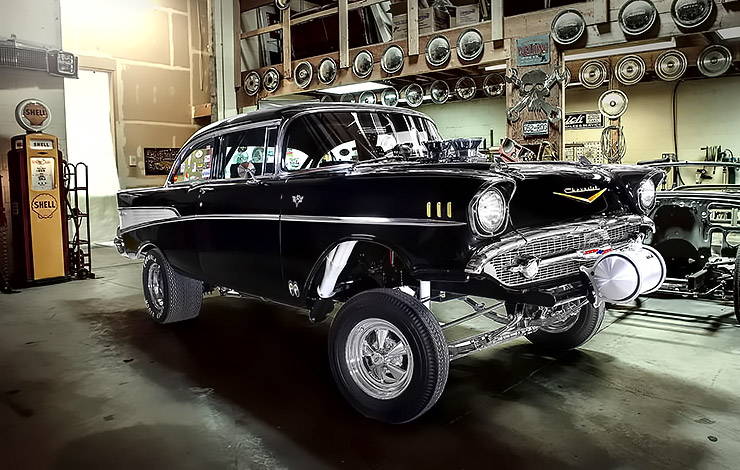 Stone had been collecting parts for years for his vision of a 1957 Chevy gasser and the car itself was an extensively rusty Bel Air 2-door sedan that came from the East Coast. He had removed the body from the frame and sandblasted both the body and frame and had completed putting the floor pans in it when Blaney arrived to take a look at 1969 Charger project he’d expressed interest in.

“He didn’t even look at the Charger,” says Stone. Blaney walked right by it and to the ’57. “It was my personal project that I’d been picking away at…it was going to be an over the top build,” says Stone, who adds that everything he’d purchased for the car to that point was brand new and he wasn’t cutting corners on the build.
– 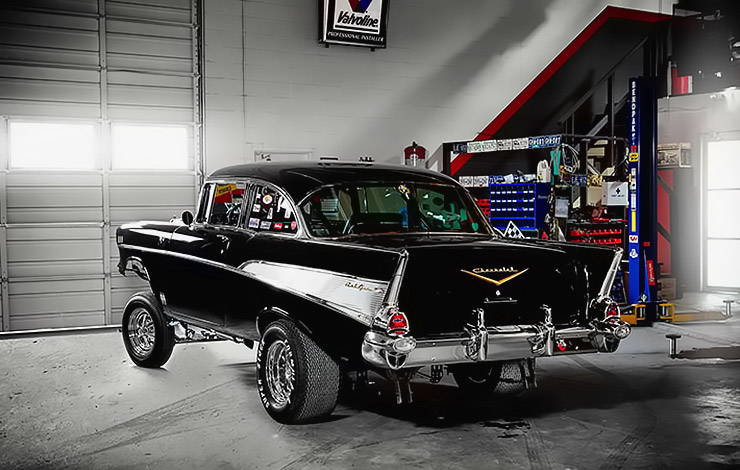 Blaney made an offer Stone couldn’t refuse but the caveat was Blaney really wanted it to be complete and ready to show at the 2014 B.C. Classic & Custom Car show in Abbotsford, BC. This was in early March….the show was in late April…just six weeks away.

Stone describes the car as a rolling shell at this point that “needed absolutely everything” including full quarters and chassis work. The mayhem that followed included a rotisserie restoration of the body and the chassis, including grinding out factory welds on the chassis and rewelding them for better strength and appearance. 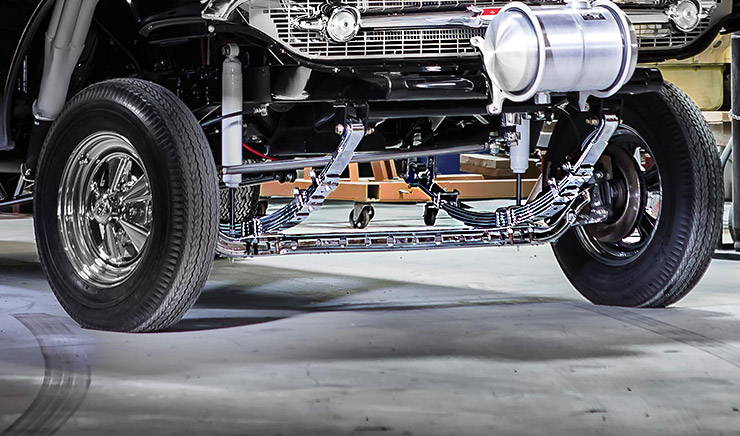 Stone says five to six guys would work on the car from early in the morning to late at night “every single day, weekends included it was just crazy.” Stone says they really got started on March 10, 2014 and had the car showready by April 18. It was even displayed on the back of a flatdeck 1-ton Chevy COE with the Stone’s Speed Shop logo on the doors. (The truck has since been purchased by Blaney). 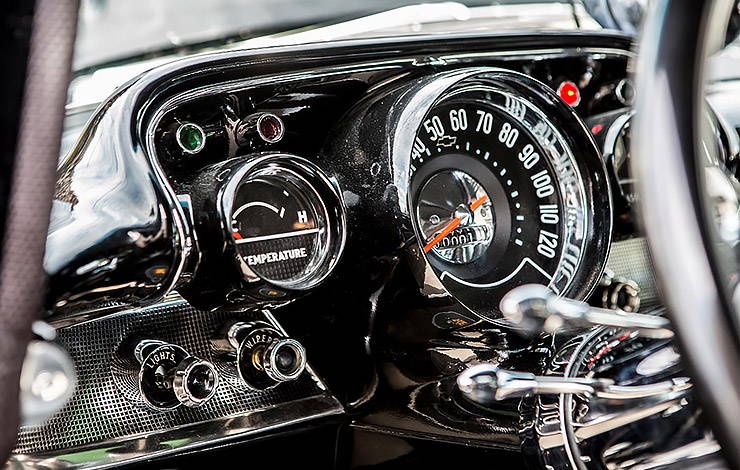 Despite the crazy compressed timeline Stone says the fact he was building the car he had always wanted to build was helpful. “It had all the parts on it I wanted, the 427-ci SBC with big horsepower a special built M-22 manual transmission,” says Stone, who adds the transmission and Currie 12-bot posi rear end were both built to withstand 1,000hp. As it is right now the Dart 427- ci engine, with Offenhauser tunnel ram and twin Holley 390cfm carbs dyno’d at 706hp at the flywheel. 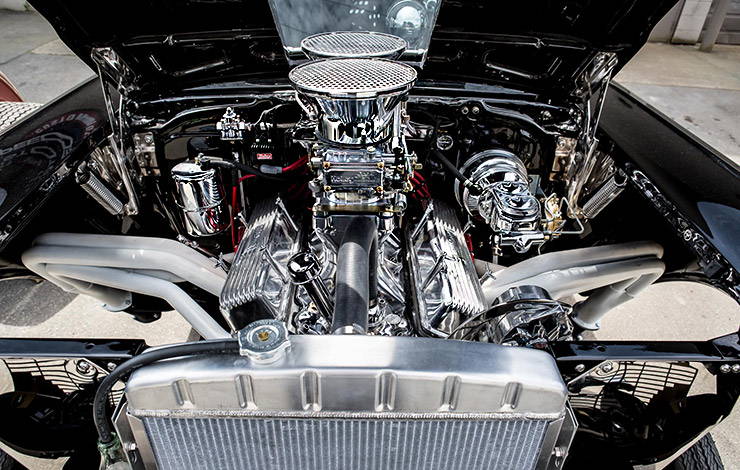 “It’s crazy fast,” confirms Stone. “I actually got to drive it a little bit to do some test and tune before I delivered it and it was just ridiculous. It would pull the wheels in first, second and third and I never got to fourth gear init.”


The car is a tribute to Stone and his crew’s craftsmanship and everything from the fabricated straight axle front clip to final paint was performed in house at Stone’s Speed Shop. Stone himself is a Level A fabricator and welder who had worked in shipyards and other metal fabrication industries for almost 35 years. He’s also a world-renowned stainless steel sculptor who fabricated, among other objects, the 35-foot long Imperial Water Dragon for the River Rock Casino Resort in Richmond, BC and a stunning eagle for Dolly Parton’s Dollywood that has a 42-foot long wingspan. 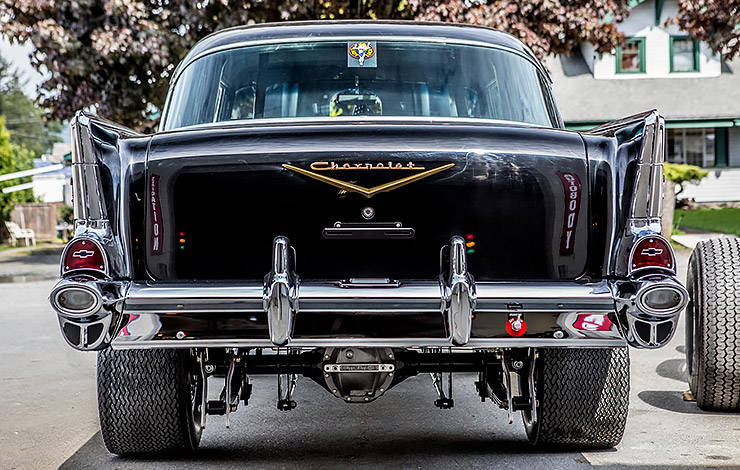 He enjoyed doing the pieces but says he’s been building cars as an obsession since he was a kid and doesn’t plan to stop.

Stone’s Speed Shop has been an official working shop now for eight years and he’s got enough work to keep him going for years more. He does eventually want to do another gasser build but he’s also really into 1953/54 Buicks. He has a couple of personal Buick projects on the go but one six-week build is enough for now so we’ll have to be patient to see the finished product.

Based on this ’57 Chevy I’m betting we’ll be impressed. 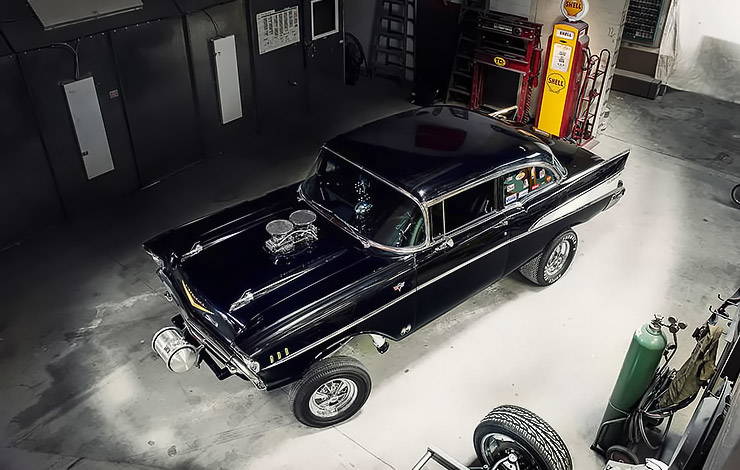