This self-leveling vehicle is the master flex of all off-road vehicles. Chainlink Extreme 4×4 with Articulated Suspension looks to be straight from a transformers movie. This thing is impressive as hell.

This over-the-top custom 4×4 has an incredibly articulate suspension, which allows it to crawl and drive over just about any terrain, including wildly irregular surfaces.


Nearly every 4-wheel drive measures their axle articulation in inches – maybe a few feet here and there. How about seven feet of axle articulation up OR down? Crazy? Insane? Are we lying? Nope – it’s true, and it’s real.
Cameron Carlson creation moves by taking power from 5.0 Mustang H.O. Cobra engine through a C4 transmission and then into a Dana 20 transfer case that has been cut in half for gear reduction out of the rear output only. Then a 6-inch driveline is hooked to an upside-down nodular-iron Ford 9-inch axles with 5.43 gears, 31 spline Summers Brothers shafts, and an ARB 9-inch has short shafts that run to two side-by-side 24-tooth chain sprockets turn one chain going to the front and one to the back along swing arms that pivot on a single hinge point that is aligned with the sprocket and the 9-inch center.
Huh, this is hard enough to write – imagine how hard is to build it. 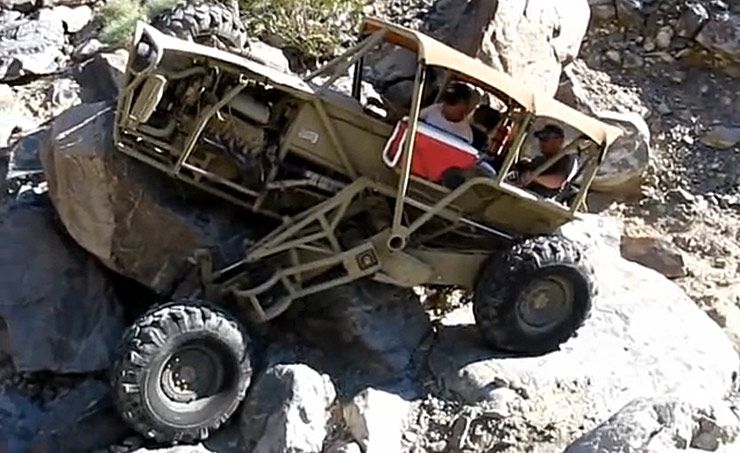 Cameron explains how brush with death forced him to build this rig. The initial idea for his transformer came right before he got married, but was forgotten. Than after getting very sick a few years later, he decided he had to build his dream. Either way, it was fear of some sort that built this crazy contraption, and how it works is hard to describe with words. What it can do is lift a front tire over 7 feet in the air all the others on the ground, and that’s without anything under said tire. Plus it can transform from a 102 to an 80-inch wheelbase by just moving the swing arms. 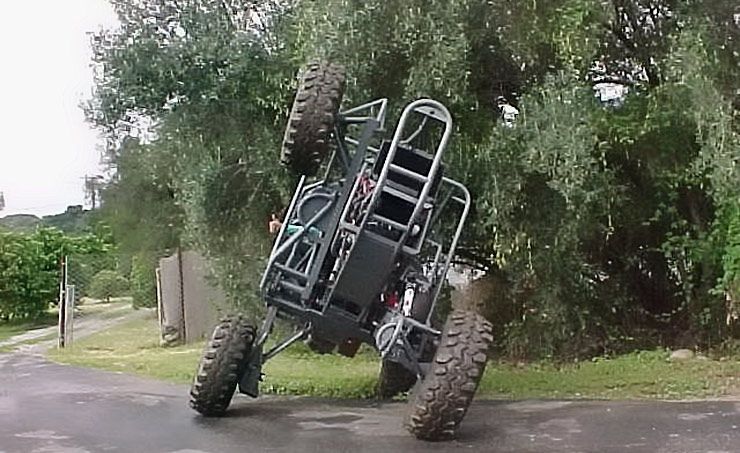 The suspension control can allow from zero to 40 inches of clearance under the belly of this beast. The ability to raise and lower the tires and suspension at will allows this circus freak of a machine to really do some neat things. 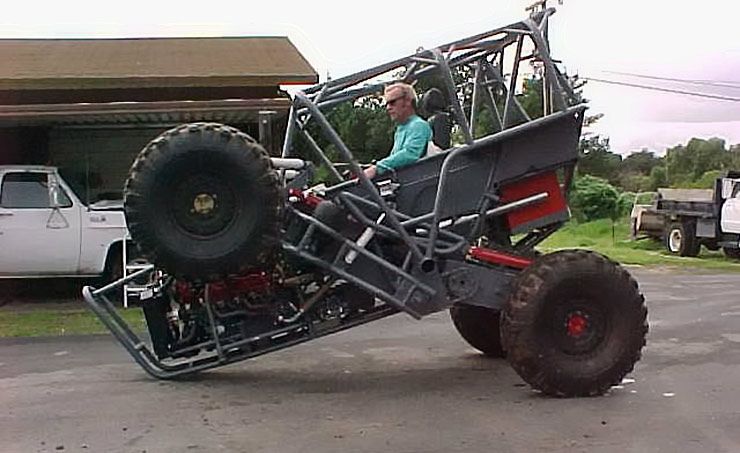 With four 24-inc-stroke hydraulic rams and airbags, Cameron can also lift the rear tires 4 feet in the air. All this control allows Cameron to attempt some pretty gnarly obstacles, but it also takes his years of experience operating heavy equipment to be comfortable with all the levers and knobs in the cockpit.
My hats off to Cameron and his “CHAINLINK”.

Watching this thing in action is a sight to behold. It’s spectacular.