Among car enthusiasts there are plenty of stories about people who stumbled into the collector car hobby by accident.

Most of them can be classified as “armchair” hobbyists whose closest contact with older vehicles is through pictures in books. Others buy older vehicles as Sunday drivers and leave them sitting in their garages most of the time.
–
Then there are people like Dan Carr of Loveland, Colorado who did stumble into the old car hobby by accident and took them to heart in such a big way that he now owns a small fleet. You’ll never see these cars collecting dust in the garage!
–
The Fleet
Dan’s primary area of interest is in Chevys, particularly the 1968-72 El Caminos and 1971-72 GMC Sprints that were based on the Chevelle platform. Since buying his first one in 1993 Dan has become something of an expert on this era of Chevy’s novel car/truck. 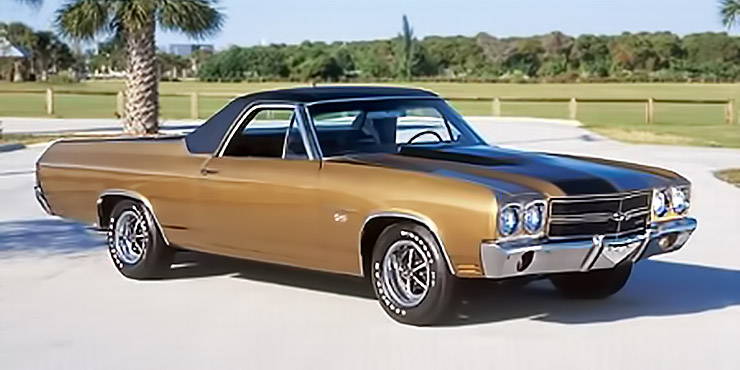 But when Dan saw his first El Camino at a car show he wasn’t sure what he was seeing. “At the time I didn’t know much about El Caminos,” he says, “but I did know that the domed hood with stripes and “Cowl Induction” emblems was something special.” That first encounter lit a fire in him that so many of us in the car hobby know well. “A few weeks later, for no apparent reason, I decided I had to have one.”
–
After searching for a few months, he found one “a forlorn looking ’72 model “ in a classified ad in the local paper. A phone call to the owner revealed the truck to be an SS model, the sportiest, best performing El Camino of the era. What he found upon arrival was a vehicle in need of some TLC.

“When we reached the house, I waited anxiously for the garage door to open,” said Dan. “There it was sitting in the corner, surrounded by junk, and listing due to a flat tire. The non-factory gold paint job was atrocious, especially the gaudy graphics on the “SS” hood.” Despite some other obvious problems, including a shredded vinyl top, missing body emblems, and minor rust, the truck appeared salvageable. Plus, it had the huge 454 cubic-inch V8, which automatically made it more desirable. The scene was set and Dan couldn’t resist. “The car was begging to be restored, so I offered him $2,500 on the spot,” he said. That was the beginning of a long affiliation with the Chevy El Camino.


Today, Dan’s stable still includes the original ’72 that started the whole adventure, along with a 1968 El Camino SS and a first-year 1971 GMC Sprint, a relatively unknown El Camino derivative. The ’68 is special because it is the first year for the El Camino SS. “It is also the only year that the El Camino SS was a separate model, and can be verified by the VIN number alone,” he said. “Starting in 1969, the SS was an option package added to a Custom El Camino model.”

A number of appearance options and a high-performance engine make Dan’s ’68 SS a head turner. A striking black paint scheme with red stripes catches one’s attention right off the bat. A set of Rallye wheels and big tires all around give the truck a muscular look, while the sporty bucket seats and console shifter make the interior blend perfectly with the exterior cues. Under the hood is where the story gets really interesting.

Putting power to the pavement is a monstrous 396 cubic-inch V8 engine, the top powerplant for 1968. This one is not quite stock, though, with its ported heads, forged steel crankshaft, roller rockers, Edelbrock intake manifold, Hooker headers, high volume oil pump, heavy-duty radiator, high-performance distributor, and a host of other performance modifications. In this form, the engine produces 400 horsepower and over 400 foot-pounds of torque. With that much power on tap, the El Camino is up to any task. It’s “driven every week or so “weather permitting” or whenever some serious hauling or towing is required,” says Dan.

The rarest vehicle among the fleet is the 1971 GMC Sprint, a first-year example of GMC’s version of the El Camino that was created to give GMC dealers a car/truck of their own. Like his other vehicles, Dan’s Sprint is no run-of-the-mill grocery-getter.

It also runs with a burly 454 cubic-inch V8 and wears all the sporty accoutrements such as bucket seats, console, mag wheels, and big tires. With its silver paint and cowl induction hood, there’s no mistaking it for a lesser model.

If those aren’t enough, Dan also owns two other performance cars, a 1969 Buick GS “Colorado” sport coupe (a high-performance mid-sized specialty car created by Colorado Buick dealers with “Colorado” body insignias), and a 1969 Buick Sport Wagon 400 station wagon. Certainly, nobody can say that Dan Carr doesn’t have eclectic taste in cars! Best of all, they don’t sit in his garage collecting dust.

Now take the opportunity to learn more about GMC Sprint SP 454 directly from the owner Dan Carr in the video below.
–