Catching big air off the dunes, you probably wouldn’t expect this truck to be diesel powered. But this 2006 Chevrolet Silverado powered by 6.6L Duramax diesel engine what looked like a mix between a fullsize and a trophy truck has more than 500 hp to the tires. 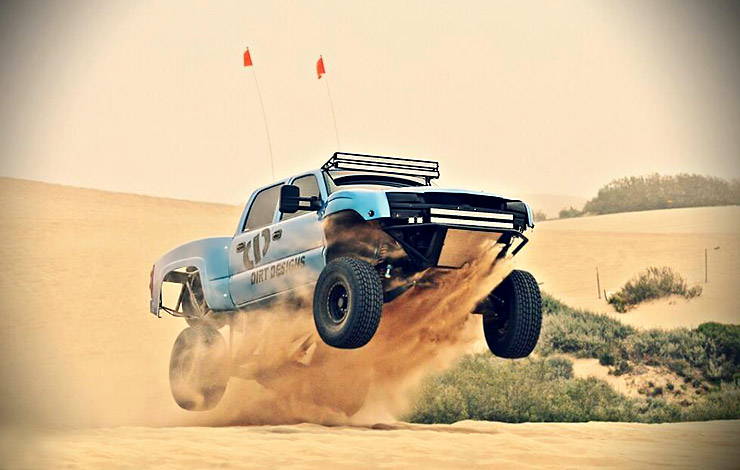 It’s quite a sight to see something like this take flight, though it was never the planned. Austin Lessel is a big fan of running hard over the dirt and sand. When he was younger he was all about quads and dirt bikes. Now that he can drive, he’s able to run full-size trucks over the loose terrain. Austin was running an Avalanche because he kept breaking suspension parts, so he decided to trade his gas-powered truck for something that wasn’t so tempting to beat on in the sand.

He picked up a 2006 Silverado 2500 because it’s heavy, and trucks like this are difficult to build for extreme off-road use. However, when you have a passion for driving over sand and live only a few miles away from the dunes in Pismo, California, temptation can only be avoided for so long.
– 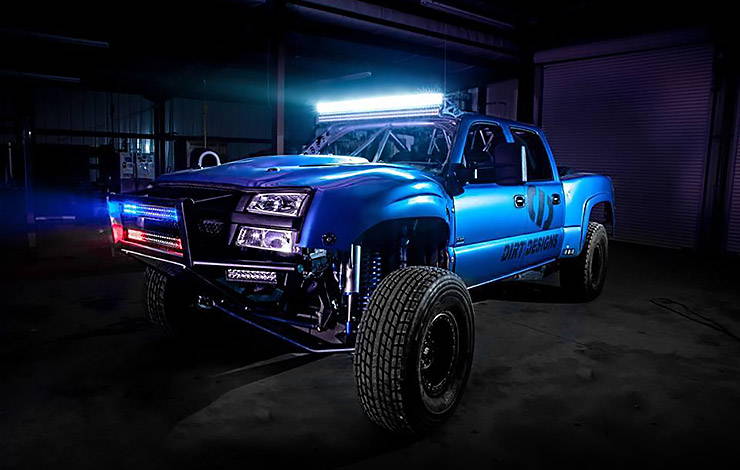 At first, Austin lifted the truck with a premade kit just to have a little fun. That quickly escalated and he couldn’t resist pushing the truck further towards its breaking point. Soon enough he was in the same situation as before, the only difference was that he had a considerably heavier diesel truck and there weren’t any suspension kits strong enough to handle his needs.
– 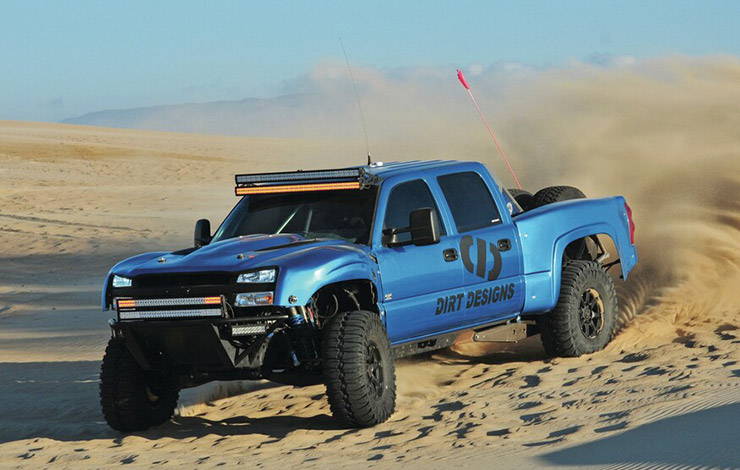 Because it’s uncommon to build something like this, Austin was forced to have a custom suspension made to fill the bill. The truck was taken to Dirt Designs in Atascadero, California, for a massive overhaul. The original front components were stripped and a custom-machined bent J-beam and radius arm suspension was built 4 inches wider, able to take some punishment. On the end are one-off spindles with 1.5-inch uniballs and disc brakes from a 2011 Dodge Ram were attached.

The steering has also been beefed up with a custom swing arm-style system complete with a fabricated pitman arm and Heim joints. King Off-Road Racing Shocks helped with a set of 16-inch 3.0 coil-overs with remote reservoirs, 18-inch 4.0 six-tube bypass shocks and 2-inch 2.5 bump stops. With these parts combined, the front suspension is ready to handle 26 inches of travel. 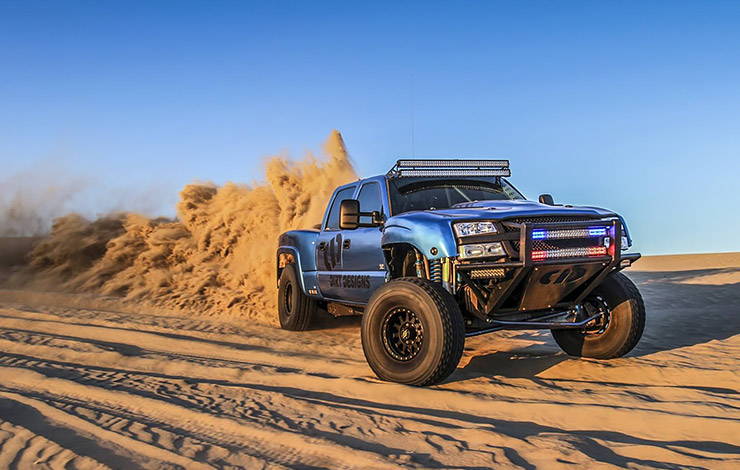 On the rearend, Dirt Designs chopped off the back-half frame to get the maximum amount of deflection. Basically, they took an American Axle Manufacturing rearend and figured out where it needed to be and how high up it was going to move. Then the frame was made out of round steel and the rearend was trussed to make it stronger.


Tackling the rear suspension, a triangulated 4-link was made for the 30 inches of travel. A matching set of King Off-Road Racing Shocks coil-overs, bypass shocks and bump stops were added. To make the frame rigid and keep Austin safe, a complete roll cage was made out of 2-inch round steel and runs from the front of the truck to the rear. 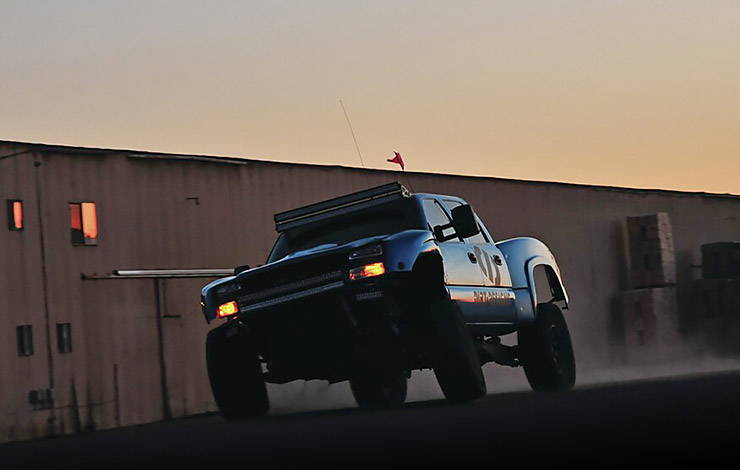 With all of the suspension modifications, some of the factory body panels wouldn’t fit the style or the function. The truck received a Trailer Products one-piece front end, while Fiberwerx Offroad Fiberglass Trophy Truck series bedsides were custom molded for the shortened rear wheelbase. The front also got a 2-inch front bumper with a pusher from Dirt Designs in case any problem objects get in the way. 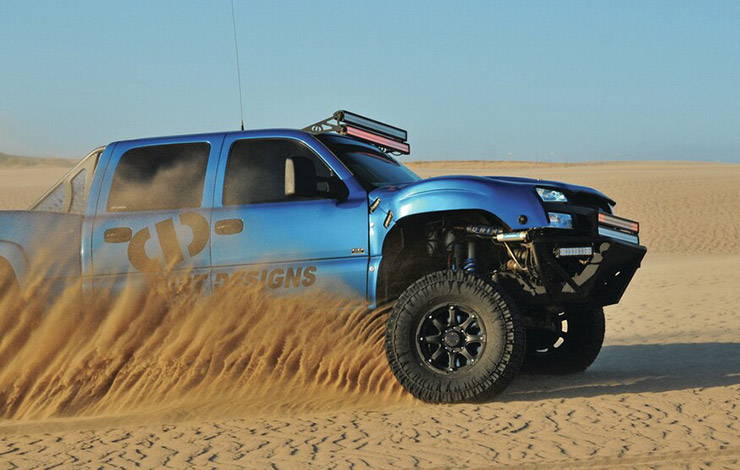 To light up the path, several Rigid Industries LED lights fit with custom mounts have been installed. Then Torlief Karr wrapped the entire body in metallic blue 3M vinyl. For a better footprint, a set of 17-inch Method Race Wheels 105 beadlocks were added with 39×13.50R17LT BF Goodrich tires.


Yes, this truck is equipped a heavy 6.6L Duramax diesel engine and it’s able to launch itself in the air. Helping the truck take flight, the Duramax has been upgraded with an EFI Live tune by Rob Coddens of ATP Trucks, a PPE lift pump, and 4-inch down pipe that connects to a 5-inch straight exhaust. Transferring the power is a stage 5 Allison 1000 transmission from Alligator Performance along with a custom two-piece driveshaft that was made by Coast Clutch of Santa Maria, California. The rearend was also optimized with an Eaton Detriot Trutrac locker with Yukon 4.88:1 ring and pinion gears and an ATS Diesel Performance diff cover. 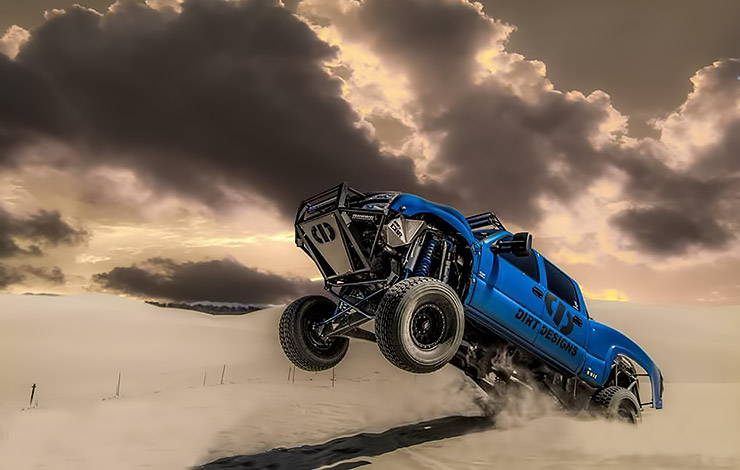 As you can see, this truck is a complete beast when it comes to going loco on the dirt or sand. Check out the Dirt Cinema video below to check out how this former feature truck does in the dirt!