Dodge was preparing radically restyled 1955 cars and did what it could to make the 1953 and similar 1954 Dodges look sharper than the boxy 1949-52 models. It also gave the 1953-54 Dodges its brilliant “Hemi” V-8, introduced in the top-line, costlier 1951 Chrysler Saratoga, New Yorker and Imperial.


Called the “Red Ram,” that Hemi produced up to 150 horsepower and let a Dodge convertible pace the 1954 Indianapolis 500 race. A factory Dodge team also set 196 American Automobile Association speed records at Bonneville with the Hemi. Dodge V-8 models finished first through fourth in the Medium Stock class in the grueling 1954 Carrera Pan Americana Mexican Road Race — and won their class in the 1953-54 Mobil gas economy runs.
– 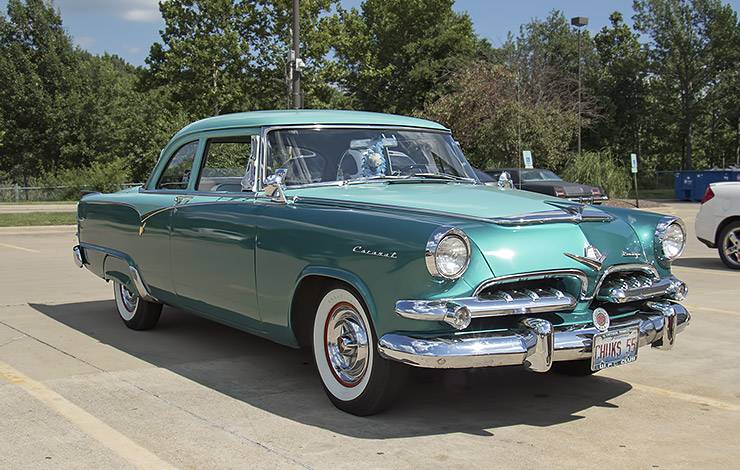 Dodge thus had a solid performance — and also fuel-thrifty — reputation before entering the 1955 model year with radically restyled models that were among Chrysler Corp.’s sleekest 1955 cars. The larger, bolder, more colorful Dodges were unlike any previous Dodges.

Wheelbases were stretched to a lengthy 120 inches and model lines were simplified to Coronet six-cylinder and V-8, Royal V-8 and top-line Custom Royal V-8. Hardtop coupes, which resembled top-up convertibles, were subtitled Lancer, and there was a Custom Royal Lancer convertible. 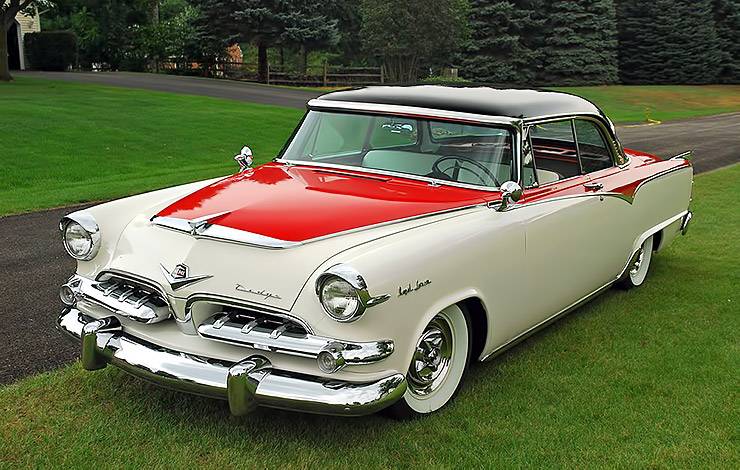 The 1955 Dodges were among the fastest American cars because big Detroit automakers were in a horsepower race, beginning that year. (It was won by the 1955 Chrysler C-300, America’s first production 300-horsepower car with its Hemi V-8.) 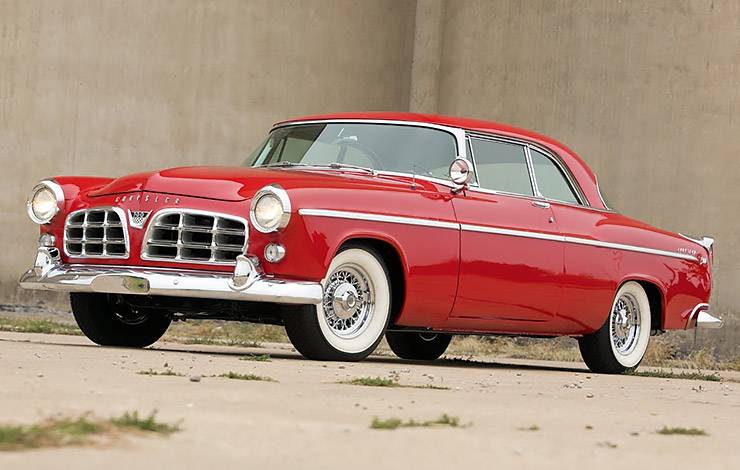 Chrysler Corp. said all its 1955 cars had the “Forward Look,” with Dodge calling its autos “Flair Fashion” models. They had aggressive front ends with two large horizontal chrome grille bars wrapped around the sides and flanking a divided grille cavity. Taillights looked like four large bullets.

A nonfunctional air scoop began at the front of the hood and flared outward and back toward the “New Horizon” wraparound windshield. Some models had the scoop running all the way to the rear fenders as an upper body molding. Two-tone paint was available. So were very colorful three-tone paint jobs for Custom Royals, with different colors on the roof, body sides and hood/rear-deck areas. Custom Royal Lancers even had small chrome tailfins. No wonder 1955 Dodges still draw stares.

Dodge offered an optional “Power Pack” for the Hemi V-8. It increased horsepower to 193, thanks to a four-barrel carburetor and dual exhausts.

That V-8 was officially called the “super-powered Super Red Ram,” but soon just became known as the “D-500” option. Any Dodge with that option thus was considered a “Dodge D-500” model, although it looked the same from the outside as other Dodges. 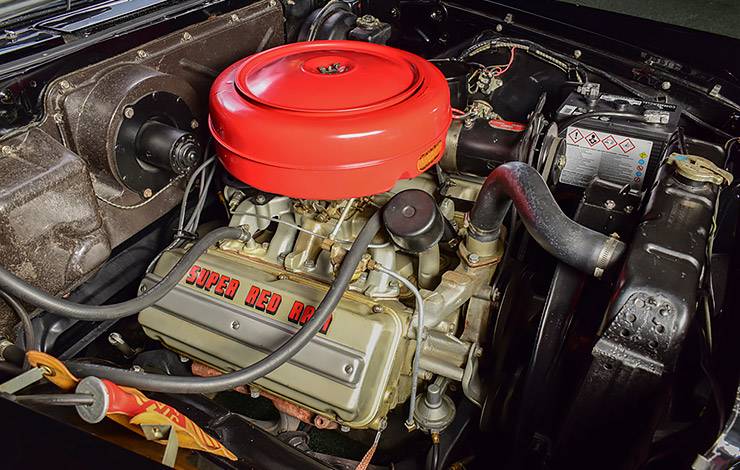 While 1960s muscle cars, including the Dodge Charger Daytona and Pontiac GTO, had “mag” wheels, scoops, spoilers and wild paint (besides sporty interiors), 1950s muscle cars had few or no such items. A D-500 thus looked the same as a standard Dodge.


A more serious D-500 option was offered for 1956 Dodges, which had a Hemi V-8 enlarged to 315 cubic inches. The D-500 package now had larger valves, mechanical lifters, modified camshaft and a higher (9.25:1) compression ratio. It raised horsepower to an impressive 260 and was accompanied by a sports suspension because of the added power.

You could get the D-500 option for any Coronet, Royal or Custom Royal V-8 model. Most were found in Custom Royals, but some Coronets had a D-500 engine and were a wolf in sheep’s clothing because they were lighter — and thus faster. 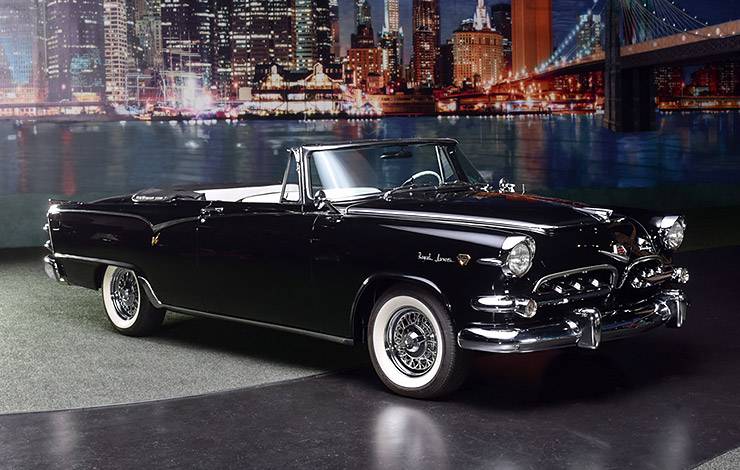 The 1956 Dodges had higher, finned rear fenders for the entire model line, giving them a sleeker look. There was revised two-tone paint, and Lancer four-door hardtops were added to the Coronet, Royal and Custom Royal V-8 lines.


Chrysler Corp. offered new high-performance 1956 models, introducing the Plymouth Fury and DeSoto Adventurer to accompany the second Chrysler 300 model. The D-500 still officially was known as a high-performance option package, although by now a Dodge equipped with it was commonly called a “Dodge D-500.”

The most spectacular 1956 D-500 was the rare Golden Lancer. It was a Custom Royal coupe with Sapphire White and “Gold Gallant Saddle” paint and a gold- colored dashboard, windshield and door moldings. The interior had patterned white/gray/black upholstery. 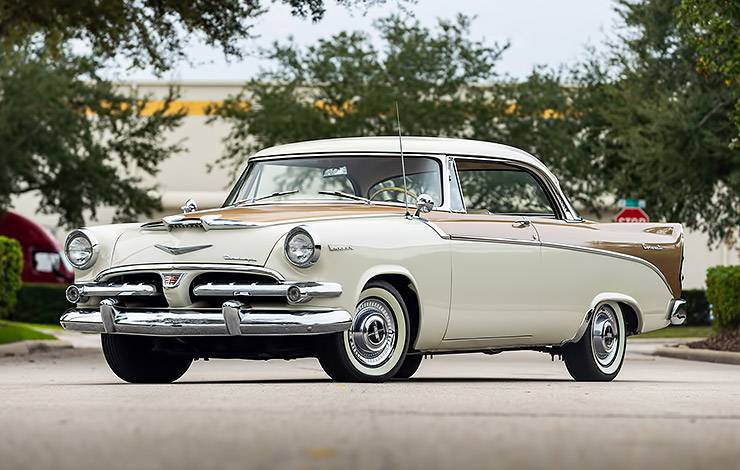 Dodge restyled its cars again in 1957, making them longer, lower, wider and flashier. 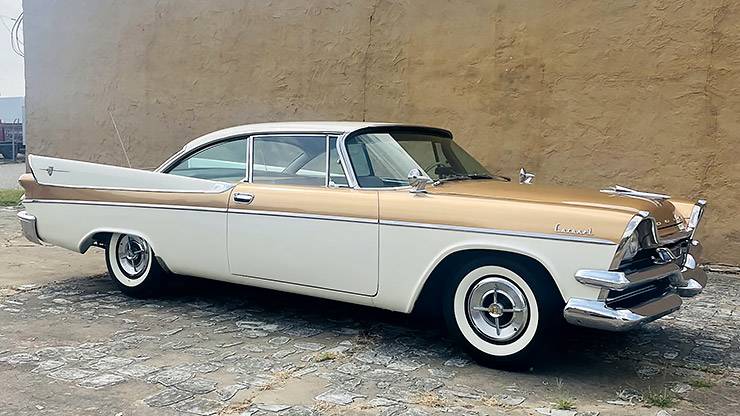