If there was a bike getting around that’d look great as the villain bike in a Hollywood blockbuster, Jamal’s Chopper would fit the bill perfectly. 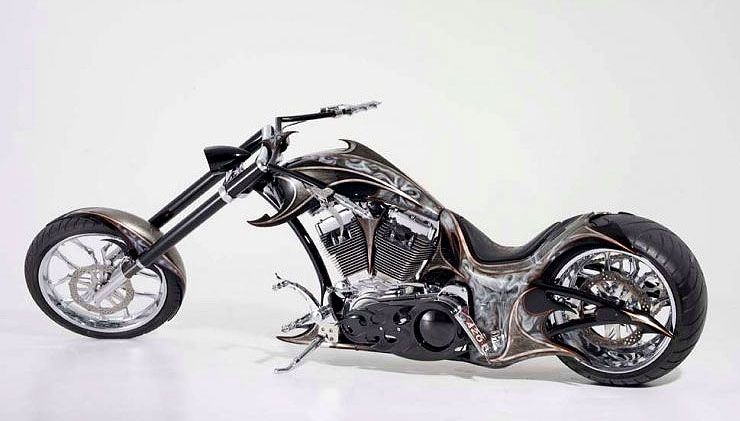 Now on his second chopper, you’d never believe that Jamal once hated Harleys. He’d always been a fan of the Japanese crotch rockets, but it wasn’t until his reluctant ride on a mate’s Fat Boy that he realised what he’d been missing out on all these years.

Like Doctor Jekyll making way for Mr Hyde, he completely rid his life anything Japanese and began shopping for his one V-powered weekender. Starting out with a Fat Boy much the same as the one the got him hooked, he soon hankered for something a little fatter! Not wanting to rip apart his current bike Jamal decided to start from scratch and put together a chopper with a 300 rear. Not doing things by halves, Jamal bought all the best bits and had names such as Cobra Craft and Queen Street smash do the fabrication and paintwork. It all paid off and he took out a number of awards with it.
– 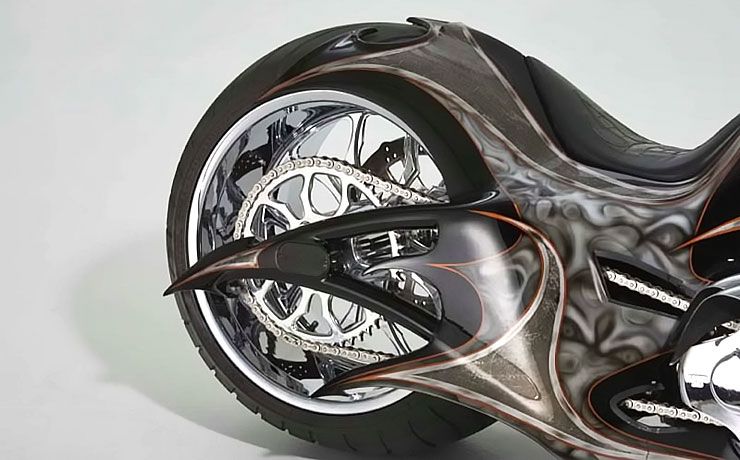 Yet, that was then and this is now. Now being the current bike you’re looking at. Jamal wanted another crack at building a custom Chopper and decided that going fatter was better. Starting with a 330 wide rear tyre, Jamal this time decided to look offshore and began discussions with the crew from The Chopp Shop in North Carolina. With a huge reputation for building a mountain of show winners, they were given the green light to head up the bulk of the fabrication work based around what Jamal was after. Now being a lot more than a guy who saw the light, he pretty much knew exactly what he wanted the bike to look like and it was just a matter of getting the parts here and a spare pair of hands to put it together.
– 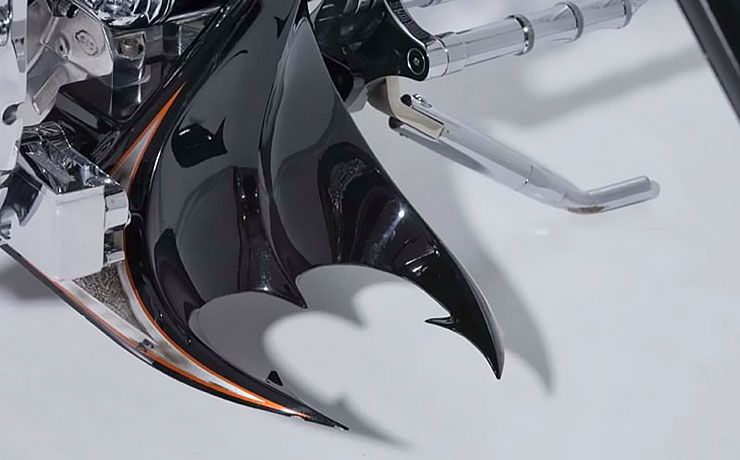 Beginning with a Wicked Willy frame from the USA, Ken from Cobra Craft and Jamal assembled the bike as it stands now over a period of 10 months. The frame itself is a Pro Street design and features a 45 degree rake and has been stretched 8-inches.

Rolling on a pair of Performance Machine “Recluse” wheels, the rear is the previously mentioned 330 and the front, a 21-inch. Both are wrapped in Avon rubber. Being a rigid frame there wasn’t much to think about with the rear suspension except for avoiding big bumps once completed, yet with the front end, Jamal chose a set of inverted 63mm forks built by American Suspension. Both ends are fitted with Performance Machine callipers and rotors and as you can see by the heat marks, the raked suspension means the rear brake gets used quite a bit more than the front one. 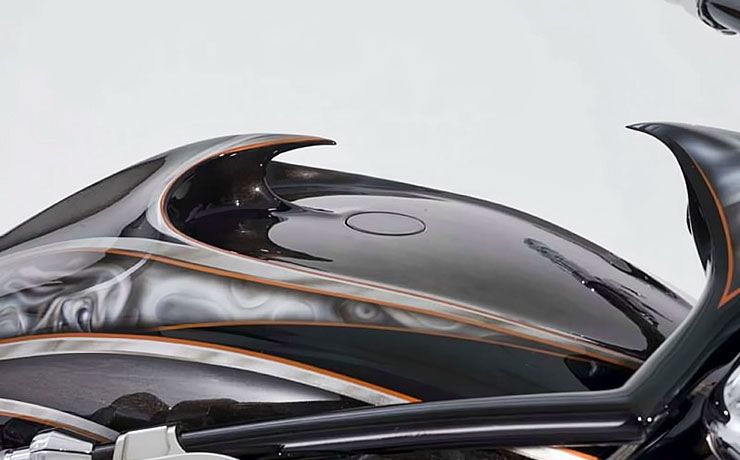 The engine is a 107ci S&S setup with Axtel barrels and S&S heads. Feeding this is a Crane ignition system and a Mikuni carby mounted on a Chopp Shop intake manifold. Jamal had been tempted by two other engine combos before this one, but it all really came down to aesthetics and with the diamond cut finish on the barrels, this one suited his needs perfectly. 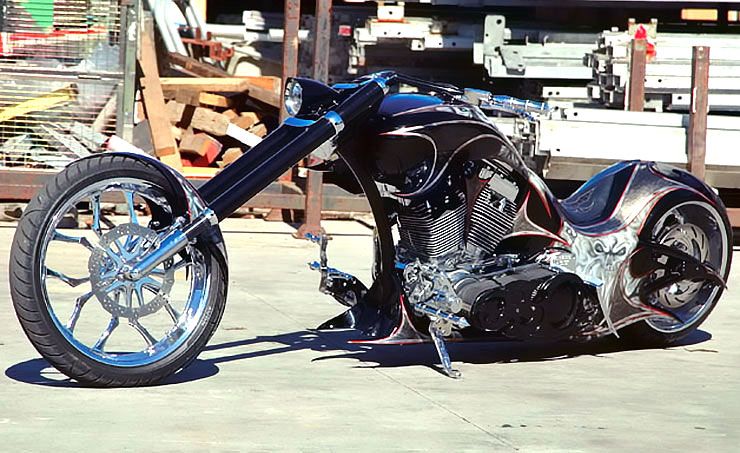 With a combination of Performance Machine hand controls and Accutronics grips, the handle bars were custom built by The Chopp Shop back in the USA. Jamal was so keen on getting the quality of the bike to the top level, he even bought in a tank and both mud guards custom built and painted by The Chopp Shop. The seat on the other hand, well, that came from an unsuspecting donor Crocodile. Electronics wise, the speedo is a Dakota Digital unit and the headlight is a Headwinds teardrop beam. The taillight is just a simple LED setup. 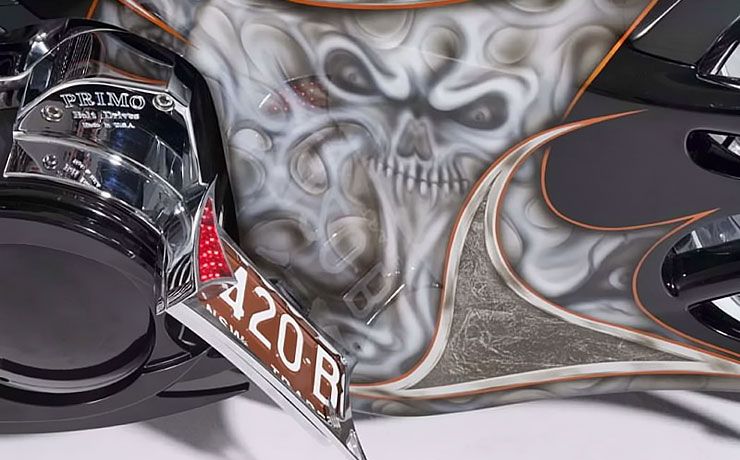 As far as building Choppers goes, let’s just say Jamal loves how this bike turned out and really can’t wait to show it off some more, yet as most die hard enthusiasts are; he’s already coming up with ideas for his next one. In the mean time, the bike is quite handy to use as a promotional tool for his wife’s lingerie business.
Hey, what could be better than hot bikes and hot women combined! 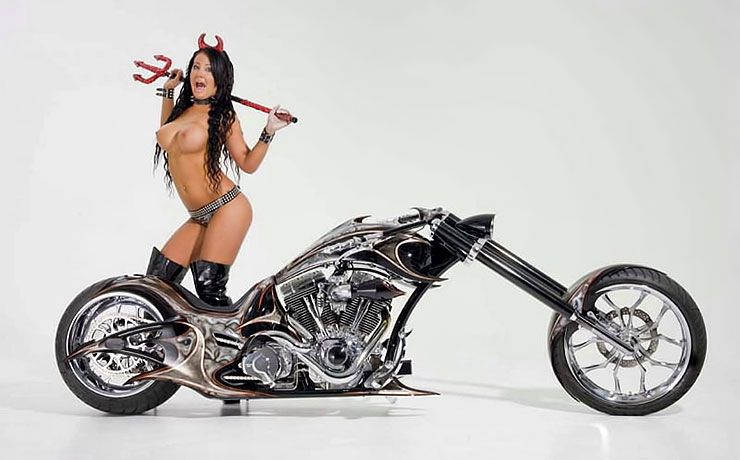