The world of gearheads is varied and complex, with many overlaps. One thing that remains constant throughout this diversity is a mutual appreciation for cars and the rewarding experiences they provide. Now not every car guy is a tattoo artist, and not every tattoo artist is a car guy, but they do frequently overlap. Noted artist Cleen Rock One of Las Vegas is both.
–

In both art and machine Cleen finds inspiration that fuels his creativity between the two. He’s one of those guys who can’t sit still and “unwinds” by tinkering in the shop. A self-professed “Jack of All Trades” he’s not afraid to tackle anything from home improvements to engine building, often diving in headfirst and learning as he goes. He has a small collection of cars and bikes and enjoys doing as much to them as he can. He also builds and sells his own tattoo machines.

A native of Elgin, Illinois, Cleen started tattooing in 1995 and opened his first shop, Top Notch Tattoos in 1999. Though many may speculate that his name “Cleen” refers to his sober straight-edge lifestyle, it’s actually derived from his cleanliness in both the art and application of graffiti as a teen. When fines and trouble started to pile up he knew he had to find another outlet for his energy. Tattooing proved to be a viable option that paid well and kept him out of trouble.
– 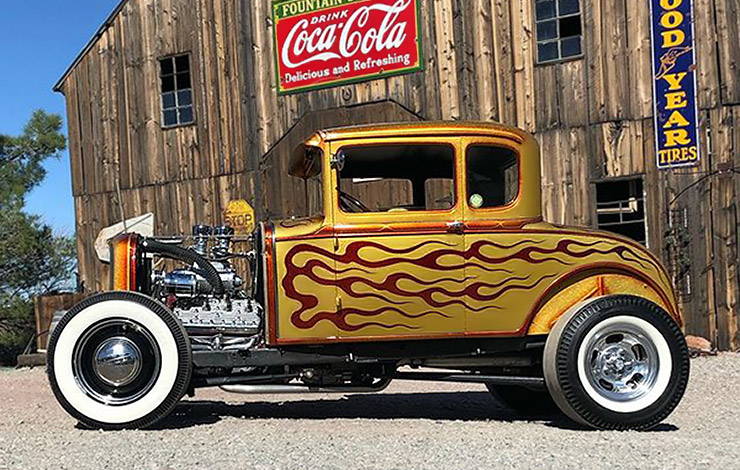 He says an interest in cars was always there thanks to his mechanically inclined father who restores tractors and built a Model A. He credits his mother, who was an artist, for his creativity. Like many families, his parents divorced and his mother remarried. Cleen has fond memories of attending car shows with his stepdad and standing in front of wildly painted vans and cool hot rods for photos. “I always thought the vans were the coolest,” he says. “I knew I was going to have one some day.”
– 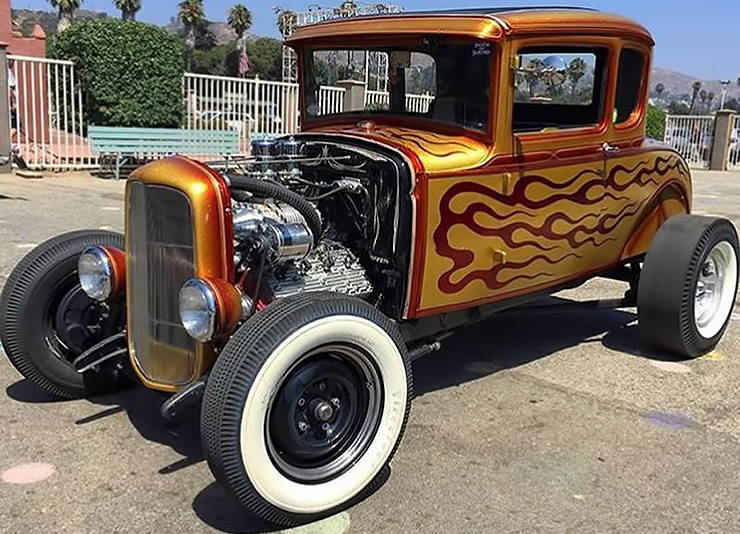 Cleen found himself working on bicycles and building lowrider bikes throughout his childhood.  At one point, he had more than 40 bikes in various states of repair and customization. After a bike shop charged a hefty fee to re-spoke a rim, he made his own wheel stand for building and truing. He was the go-to bike guy in the neighborhood.

He bought his first car at 19, narrowly passing on a ’69 Barracuda before settling on his beloved 1962 Ford Fairlane. 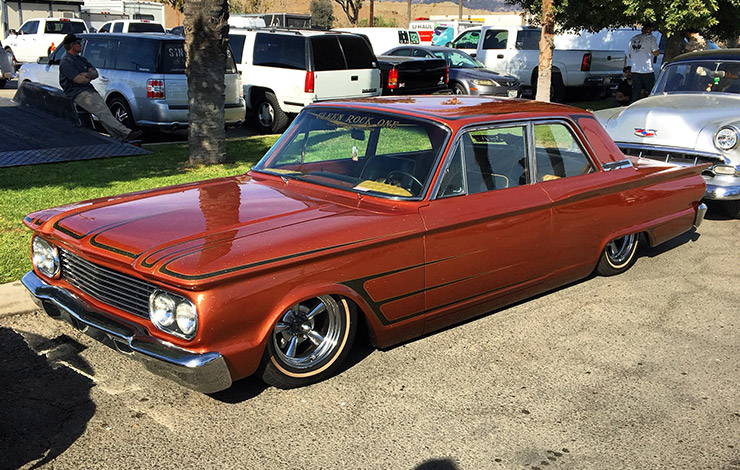 “I was into the whole rockabilly thing,” Cleen says. “Cars are a big part of that, and I was really looking for a Merc, because I like that whole Merc thing, and thought it would be cool to drive around in one. But they are pretty hard to come by, especially on a budget, and then I found the Fairlane. It was bone stock but I just loved it.” 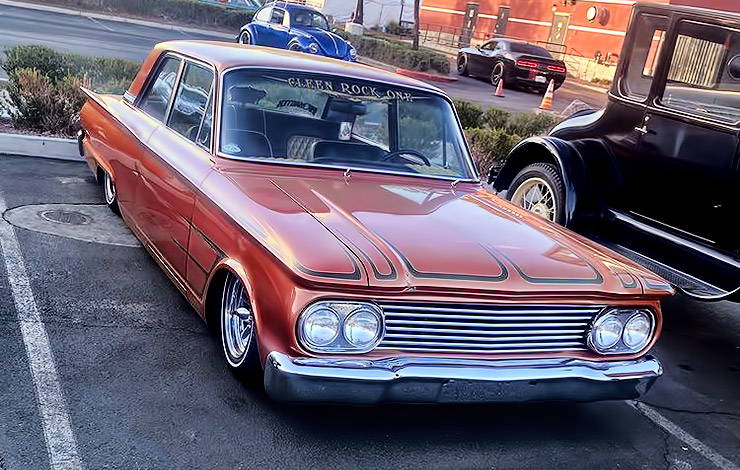 He would spend many years slowly transforming it into a cool-cruising custom in his spare time. He began customizing the rear by frenching the taillights with ’38 Chevy headlight rings and adding a recessed panel for a tube grille. He then brought it to his buddy Drew for a paint job, but he quickly pointed out that a car with that much customization to the rear needed a front to match. The paint would have to wait as a new tube grille and floating headlights were fabricated. After nearly 10 years of construction, it’s finally shiny and ready to enjoy full time.


While he may farm out the paintwork, Cleen does have a 1,000 sq.ft. home shop with a lift where he works on his fleet of other vehicles. His latest project was replacing the throwout bearing in his ’31 Ford Model A. The Model A was built in 30 short days from a stock green coupe on yellow wire wheels, to a fenderless hot rod with a S.C.O.T.-blown flathead built by H&H. 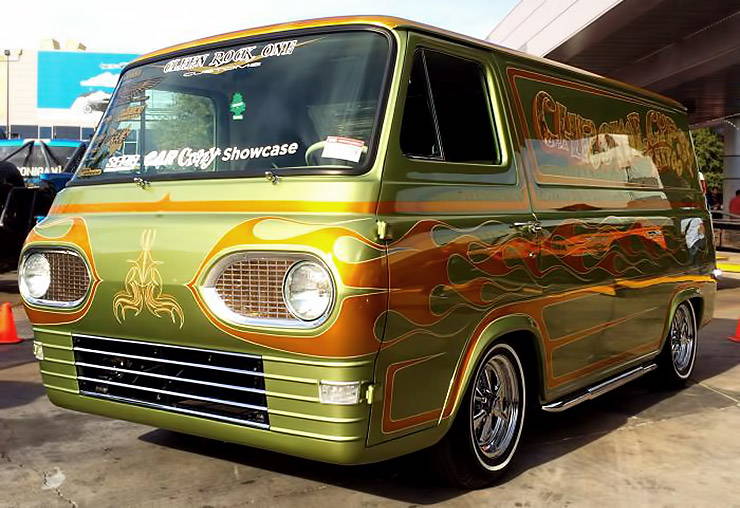 Other cars include a chopped ’32 Ford sedan Fordor, several motorcycles and his wildly painted 1964 Ford Econoline which lit up the Internet in 2013 with a debut at SEMA. It was built from a Jeff Allison rendering and is emblazoned with “Chrome Gypsy Tattoo” in gold leaf lettering, after the shop he opened in Las Vegas in 2010. 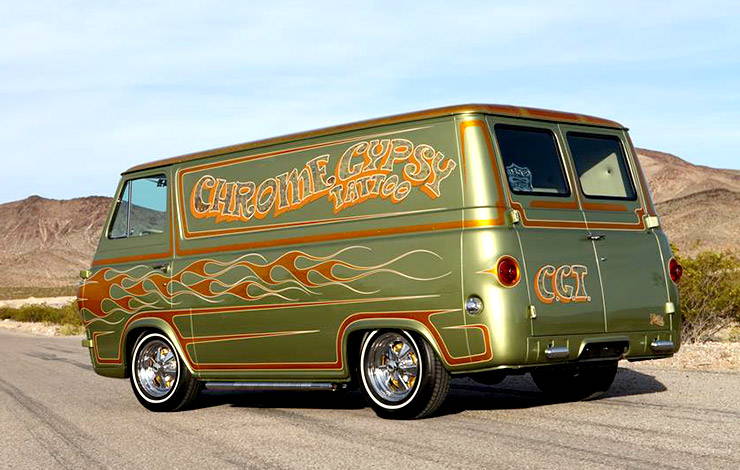 He also builds tattoo machines from scratch, winding the coils and forming the frames. He can often be found working on mini-bikes or skateboarding with his kids at the local skate park and hanging with his Bare Bones Car Club members.

If he looks a little familiar, it’s because he was runner-up on season five and seven of Inkmaster, a tattoo competition reality TV show that eliminates contestants until only one remains. Also, he recently expanded his shop business by opening another one, called Golden Skull Tattoo, right on the Vegas strip.