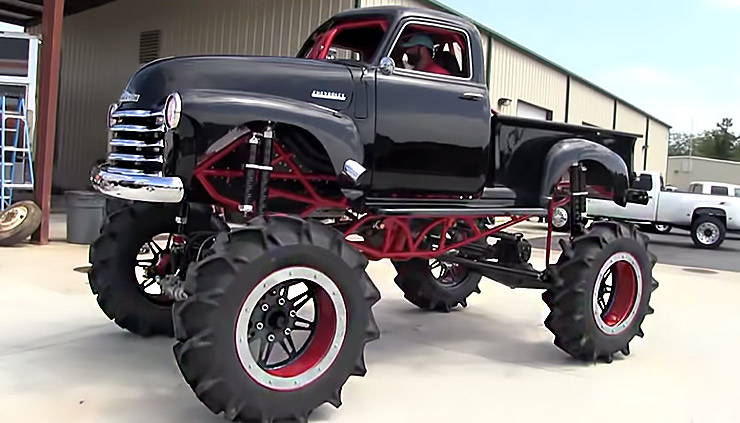 This is a beautiful truck to begin with, but the build job makes the body stand out and this was a perfect year for Chevy pickup trucks. The truck is named Sick 50, and it lives up to its name. The Scott Shocks offer plenty of support and add to the charm of this vehicle. Scott Shocks are a standard for mud trucks.

The engine is a 540 blower motor that sounds amazing. The short pipes play through the fender and offer stable mount for deep mud bogging action.  As the video plays, notice that drone cam action for the views of above the truck. It is a nice touch and adds a bit of drama.
– 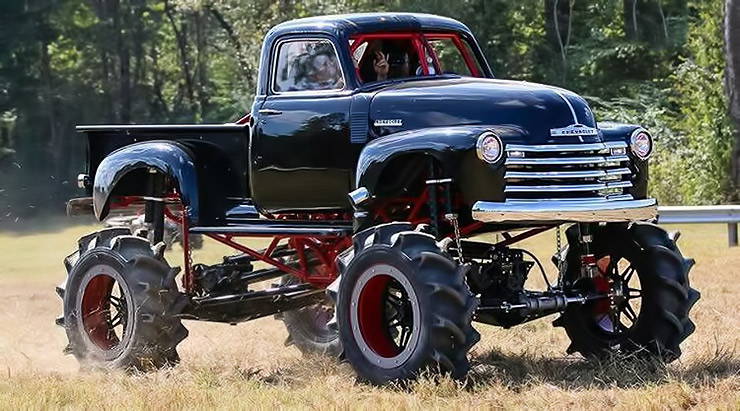 While the truck is awesome, there is some kind of a mechanical problem with the front suspension. Notice as the truck begins to accelerate that smoke appears from the front wheels, and the rear wheels leave the ground. While the truck is equipped with high performance racing seat belts, nobody is wearing them. At first it appears as though the drive has slammed on the brakes, but as you listen to him talk about the issue, he explains that the truck does not have front brakes. That makes this an odd problem. Shock problems or not, the custom Chevy pickup truck’s stats are impressive.

Overall the truck is beautifully constructed, and the streamlined design of the interior is exactly what you want in such a high-performance mud truck. It exudes a smoothness that makes it hot.

The only thing that I can think is that there must be something wrong with the pre-fab transfer case to cause the front wheels to lock up without affecting the rear wheels. I say that because the wheels are affected equally. For a pro built truck that is a big issue and it reflects some of the problems that can occur when parts must be manufactured. The thing to focus on is not specifically the problem, but how the builder handles it. Clearly there is an issue. It happens not once, but twice. At higher speeds, it could lead to a serious accident or rollover event.


At some point whatever that problem was it was corrected because there are other videos of the truck performing fine below. 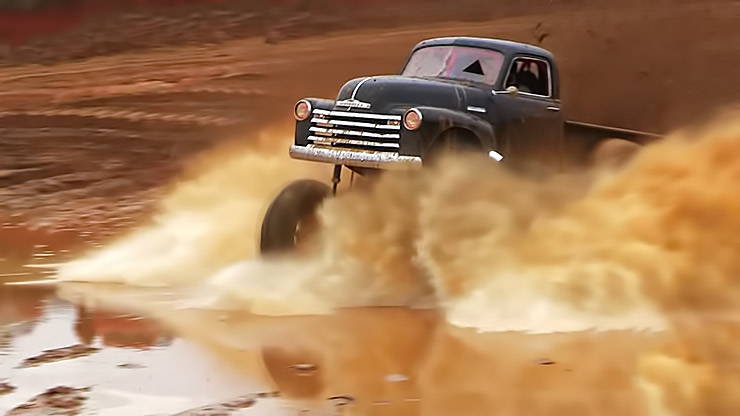 The Custom Mud Truck in Action

In the following video, you get a good look at Sick 50 getting down in the mud as it makes its way around the course. The 1300 horsepower engine really shows off its power as the truck is launched over the jumps. It looks like a fairly stable build and a testament to Scott Shocks as the truck remains stable even while cornering in the soft dirt.

As you watch both videos, think about the amount of abuse that a truck like this goes through. Sick 50 handles all that stress pretty well. The truck seems to be right at home on this course. What do you readers think causes the suspension issue in the first video? Would you take it for a spin over the course?