The story of Ford’s classic 1954 Crestline Skyliner begins in 1949, even though it would not be for another five years that the Crestline Skyliner would roll off the assembly line. The 1949 Ford was a total break from previous styling when it was introduced on June 8, 1948. Everything was new and received an enthusiastic reception.


By the time 1953 and 1954 rolled around, Ford went with some minor cosmetic changes and increasingly larger engines. Three model lines were offered during these years, and these were the Mainline, Customline, and Crestline.
– Of these three, the Crestline Skyliner, a 2-door hardtop with a green tinted Plexiglas roof over the front seat, was Ford’s luxury line car in 1954.

Made from acrylic and tinted green, the roof panel was marketed by Ford as offering a “freshness of view.” Simply put, this car is a view of the future’s past, straight out of the aviation-obsessed 1950s.

>After 22 years of producing and improving the famous Flathead V-8 engine, Ford decided it had gone as far as it could go with that engine after 1953. In 1954, Ford introduced an all-new engine with a distinctive profile: it was a 239-cubic-inch, 130 Hp Y-block V-8 that produced 20 horsepower more than the 1953 flathead V-8. 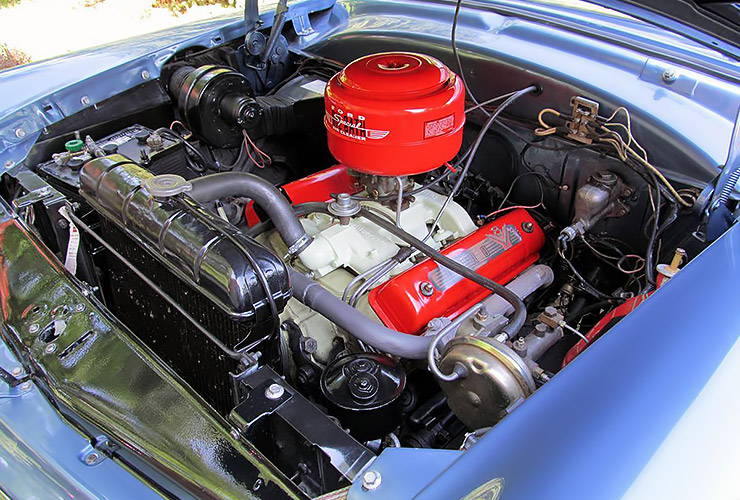 The new engine had a shorter stroke than the old flathead, had wedge-shaped combustion chambers and came equipped with a Holley 2-barrel carburettor, and it was mated to the Ford-O-Matic transmission. The interior features an AM radio, while exterior accessories include a sun visor, rear fender skirts, stainless rocker guards, a rear-mounted spare, and front and rear bumper guards. 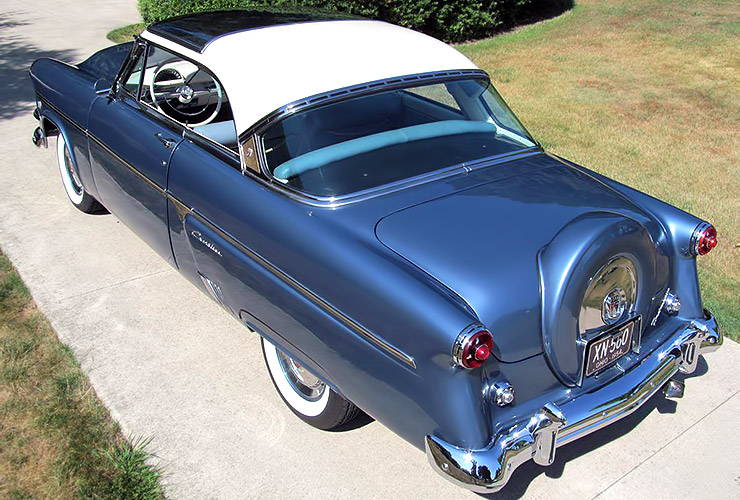 Most of the auto manufacturers of 40 plus years ago were big into naming parts of the cars. Ford called the spring loaded engine hood “Presto-lift” and the see-through speedometer “Astra-dial.” Under the hood, off to the left side of the dual downdraft carburetor and beneath the oil bath air cleaner, is the “See Clear” windshield washer reservoir bag. Since this was only the fourth year for Ford-O-Matic automatic transmissions, the Ford-O-Matic label is proudly displayed on the deck lid. The shift pattern is the same as on current Fords. Built only for one year, 13,144 Crestline Skyliners were sold in 1954, before being replaced by the Crown Victoria Skyliner in 1955.