Have you ever wondered if a bicycle wheel would work on a car? Maybe you’ve had that idea before and maybe not, but we’ll all be so curious about the results. That’s the question high school student and a custom wheel maker teamed up to answer.

Bryan Higgins, a senior at Thomas Jefferson High School in Fairfax County, needed a little help with his final semester project. That’s where custom bicycle wheel specialist Bill Mould came in. The two worked on the project mostly from a distance until the final installation, Higgins drawing up plans on a computer and Mould executing them in his workshop.
Bill Mould, retired Air Force colonel, has a background in engineering that has helped him become quite the designer as well. He recently decided that he wanted to see if one of his bicycle wheels would be strong enough to support the full weight of a car. Together, the two managed to fit a sedan with a specially made bicycle wheel. This sounds easy enough at first thought but once Mr. Mould reveals everything that is involved in the process you might think twice. 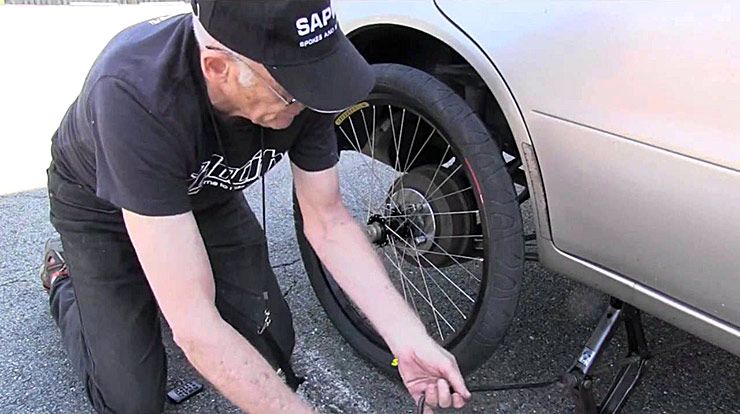 The duo spent close to two months testing various designs until they came up with a winner.  Bill modified an existing bicycle wheel with a new 22 millimeter axle instead of the weak standard 9 millimeter found on most bikes.  Bryan worked on a mounting adaptor that would allow Bill’s creation to mount to the hub of a Toyota Corolla.

Their main thought was would the apparatus be strong enough to hold the weight of the car?  Technically it is possible. The Corolla they put it on probably weighs around 2500 lbs. Divide that by 4 and it’s 625 lbs per wheel. But also since it’s FWD there’s more weight in the front, and they put it on the back. The weight distribution on that corolla is probably over 60% in front. So if 40% of the weight of the car is in back, then it’s only about 562 lbs per wheel, which is less than the dynamic force a BMX wheel experiences when slammed into the ground by a 200 lb rider. The only way to answer that question was through a test. Apart from many other issues, the main problem is how to attach this wheel to a car. Now Bill wants to take the design to the next level and try to put four bicycle wheels on a vehicle.

You can check out Bill and Bryan’s journey in the video below.