This 1931 Ford Model A roadster was built by Bear Metal Kustoms of Morro Bay, California-based shop. 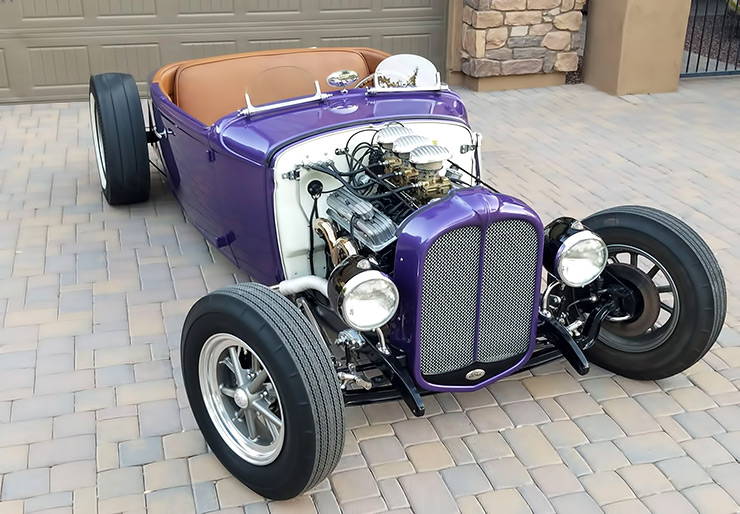 It took 14 months—and thousands of iPhone texts and photos—for the team at Bear Metal Kustoms to turn customer Will Radcliffe’s vision of a 1923-styled 1931 roadster into reality.
Radcliffe contacted Jason and Rochelle Pall, owners of the Morro Bay, after he saw a magazine article about “Bad Penny,” a customized 1923 roadster the shop had completed.
– 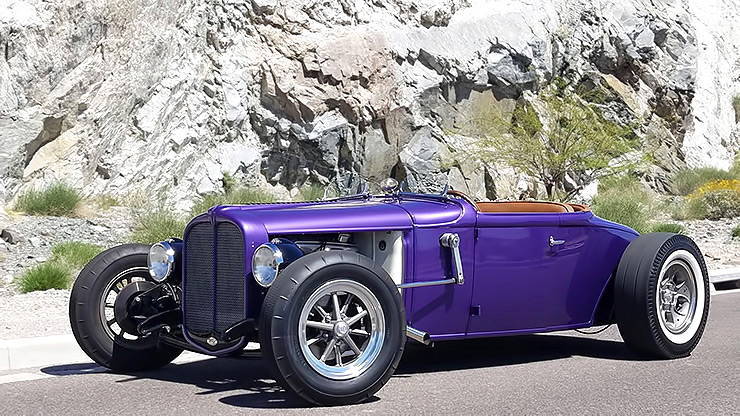 “Will approached us to build a larger version of our ’23 roadster for him,” said Jason. “Since he is over 6 feet tall, we needed to use a 1931 roadster to accomplish this (and give him enough room).”

The build team found a 1931 roadster in Southern California and began the job of giving its customer his own bigger, badder “Penny.” Because Radcliffe lived in Texas, Jason had to rely on modern technology to keep his customer updated on the build. Despite the distance, Radcliffe was kept very much in the loop through photos, texts and phone conversations with the build team in central California.
– 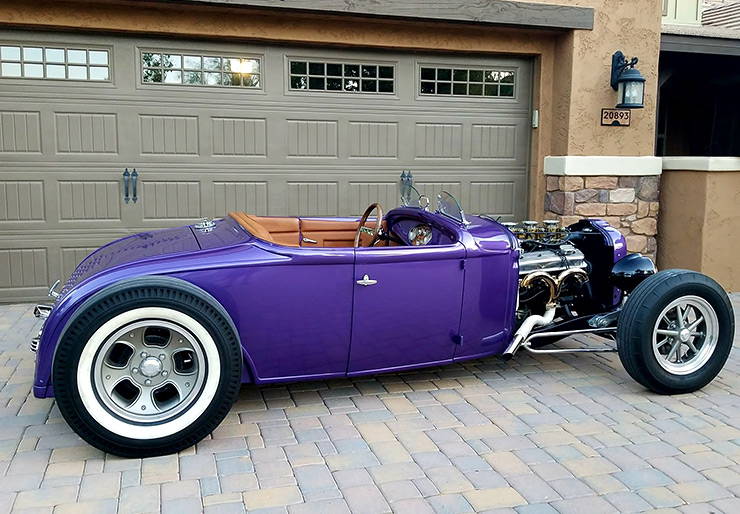 “Will flew out when we purchased the car, and flew out again when we had it assembled and running before body and paint,” said Jason. “The rest of the time we showed him progress and ideas by iPhone.

“Will had a vision of the car (and wanted it) styled after our 1923 roadster, but he allowed us to take it to a new level with custom art deco details and rare and unique parts,” he added. Although the body of the car was in good shape, the four-person build team replaced both front cowl panels, shaved the gas filler and modified the top of the cowl. The original Model A rails were boxed and swept in the front for 3 inches of drop. The back of the frame was Z’d 14 inches. The motor mounts, tubular crossmembers, and suspension were made in-house at Bear Metal Kustoms.


“We had an awesome Oakland art deco grille that we wanted to use for inspiration for the car,” said Jason. “We used the top of the Oakland grille and mated the top of the original Ford grille to it but flipped it and put it on the bottom. We shaved the filler hole and smoothed it out.” 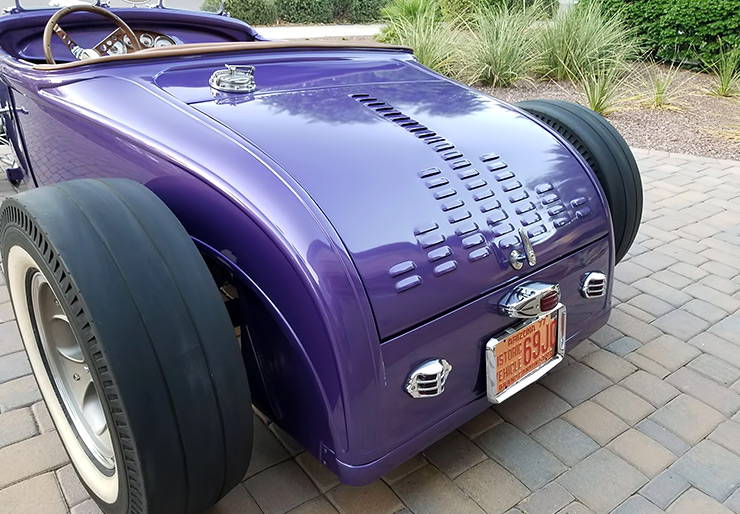 The team louvered the custom hood and rear decklid so that it followed the lines of the grille. “We continued the art deco feel with the grille insert and the Electroline headlights, taillights and Pathfinder center light,” Jason said. 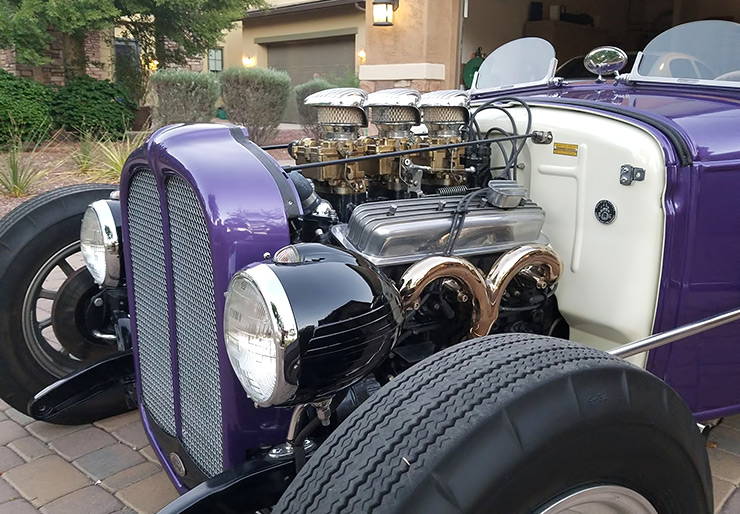 Under the hood, the team placed a small-block Chevy V-8, a custom 3 x 2 intake and a T-5 five-speed transmission with a hydraulic clutch. Once the car was assembled and running, the build team realized they’d have to make some adjustments.

“We knew what we had to do for the hanging pedals to work with his height, especially since we put in a five-speed,” said Jason. “We drove the car around a bit to work out all the fitment issues and then tore the car apart to do final bodywork and paint.”


Radcliffe wanted his roadster to be painted with a purple color that closely resembled the school colors of his alma mater, Texas Christian University, so Jason sent him several paint samples by mail. They finally decided on a purple from BASF’s Onyx HD line. 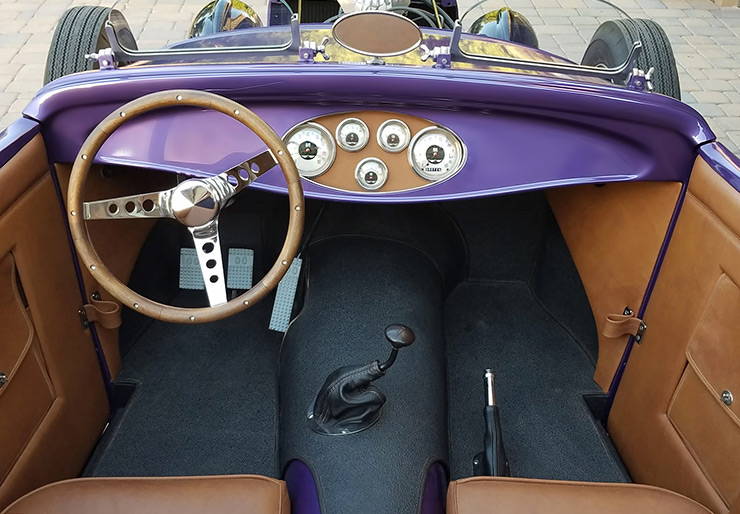 For the interior, upholsterer Jimmy Z of Cayucos, California, used rich brown leather from a Mercedes. A smoothed 1932 Ford dashboard with Studebaker gauge panels and custom windshields were added to the roadster to give it a regal look.

Radcliffe was thrilled with his art-deco-styled roadster, as were the show’s judges: the car took first place in the Altered Hot Rod Roadster- Pre 1935 class.